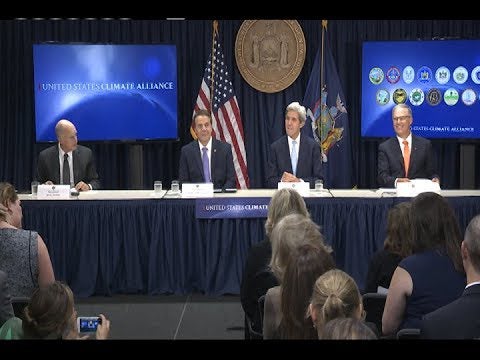 By Luis Martinez and Kit Kennedy

In a forceful show of climate leadership, Governors Andrew Cuomo (NY), Jerry Brown (CA), and Jay Inslee (WA) and former Secretary of State John Kerry came together in New York City Wednesday as part of Climate Week to celebrate the progress and growth of the U.S. Climate Alliance, the bipartisan coalition that has grown to 14 states dedicated to meeting the Paris agreement climate goal. The coalition was founded by Cuomo, Brown and Inslee after President Trump announced the U.S. intent to withdraw from Paris.

President Trump may prefer to pretend that climate change isn’t real—Gov. Cuomo quipped that the Trump administration is in “the State of Denial”—but these leaders detailed the extraordinary strides they’re making, in the absence of White House leadership, to slash greenhouse gas emissions and grow their economies at the same time. For New Yorkers, it’s exciting to see Cuomo’s leadership on clean energy and climate continue to accelerate, from setting strong renewable energy goals, to a successful push with other Regional Greenhouse Gas Initiative states to further slash carbon emissions, to banning fracking.

Other members of the coalition are Colorado, Connecticut, Delaware, Hawaii, Massachusetts, Minnesota, Oregon, Rhode Island, Vermont, Virginia and the Commonwealth of Puerto Rico. And we’re counting on that list to grow even more!

According to a new report issued by the alliance Wednesday the coalition represents 36 percent of the U.S. population; 40 percent of U.S. gross domestic product; at least $7 trillion of combined economic activity and 13 million clean energy jobs. These states are proving that climate leadership promotes economic growth:

Alliance members’ progress and the growth in their ranks is welcome news. With the Trump administration more interested in propping up its friends in the fossil fuel industry than confronting the existential threat of a warming planet, their leadership is crucial.

The Natural Resources Defense Council (NRDC) stands ready to help these states and others in achieving their climate and clean energy goals. In our new report, America’s Clean Energy Future: The Pathway to a Safer Climate Future, based on comprehensive modeling performed by internationally recognized consultants E3, we show that the U.S. can slash climate pollution by 80 percent by 2050 primarily by going big and fast on three key strategies: scaling up energy efficiency improvements to cut overall energy demand in half; scaling up renewable energy to provide 80 percent of our power; and electrifying vehicles and key building energy uses. Underlying these key strategies, we need to build a stronger, smarter, more resilient electricity grid. We can do all this at a cost of only 1 percent of annual energy costs—and by 2050 our pathway costs less than “business as usual.”

Governors Cuomo, Inslee, Brown, Cooper and the other U.S. Climate Alliance governors are showing us what climate leadership looks like. Like NRDC, they’re galvanized by the Trump administration’s abject failure on climate and are ready to keep pushing forward. We know the clean energy pathway to meeting our U.S. climate goals—let’s get going on our own. There’s so much more to do and states and cities can lead the way until the federal government is ready to lead again.