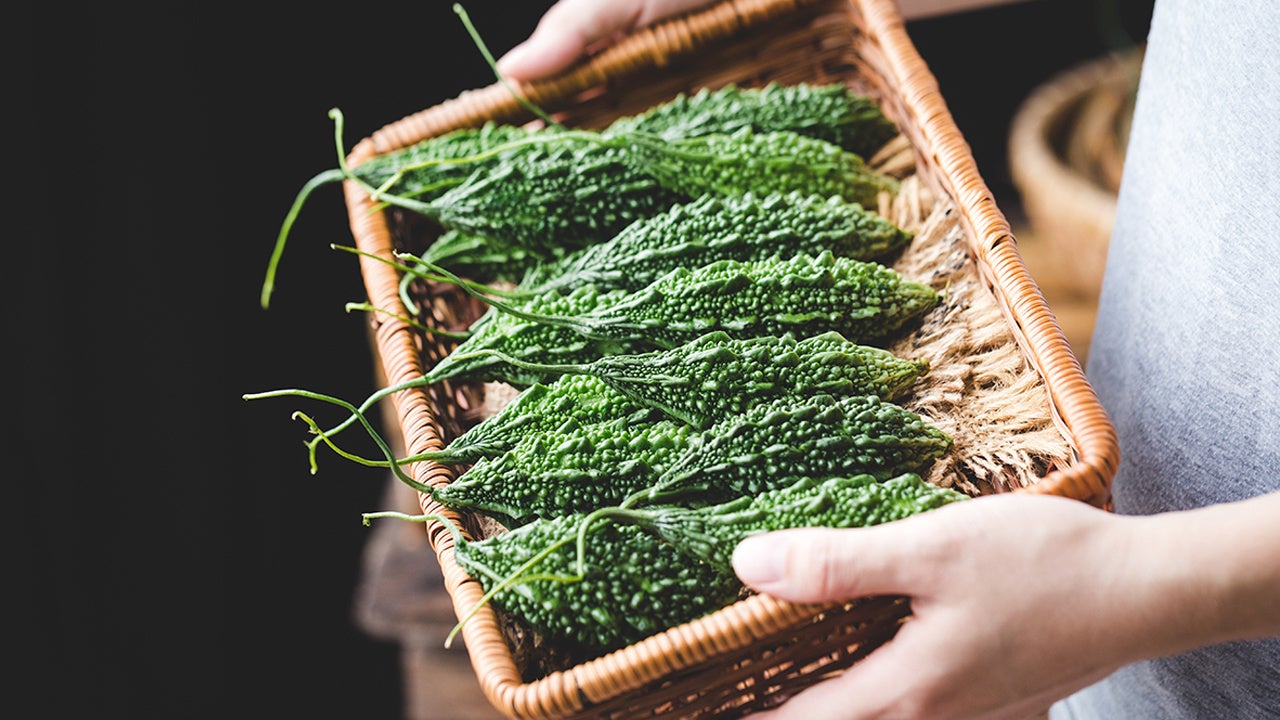 Commonly consumed vegetables, such as spinach, lettuce, peppers, carrots, and cabbage, provide abundant nutrients and flavors. It’s no wonder that they’re among the most popular varieties worldwide.

While these veggies are very healthy, relying on them heavily may prevent you from trying less familiar choices.

In fact, research shows that increasing the variety of vegetables in your diet may help reduce your risk of heart disease — and even improve your overall quality of life (1Trusted Source, 2Trusted Source, 3Trusted Source).

Incredibly, thousands of different vegetables grow all over the world, some of which may be available where you live.

Here are 18 unique vegetables that can make a healthy and exciting addition to your diet.

Daikon is a winter radish often used in Asian dishes. With a crunchy texture and mild, peppery flavor, it resembles a large, white carrot with a leafy top.

What’s more, daikon contains high amounts of powerful plant compounds, such as glucosinolates, which act as antioxidants and may have anticancer properties (5Trusted Source, 6Trusted Source).

Taro is a root vegetable that’s a popular carb source in Africa and Asia. When cooked, it has a subtly sweet taste and soft texture, making it an excellent stand-in for potatoes, sweet potatoes, and starchy vegetables.

Taro is especially beneficial for digestive health due to its impressive fiber content.

Studies show that its fiber acts as a prebiotic, stimulating the growth of friendly gut bacteria that boost immune health and protect against bowel diseases, among other benefits (8Trusted Source, 9Trusted Source).

Delicata squash is a type of summer squash — though harvested during winter — with an oblong shape and creamy color marked by vertical stripes.

Unlike other squashes, such as butternut or pumpkin, delicatas have thin, tender skin and can be eaten without peeling the outer rind. Delicata has a sweet, pumpkin-like flavor that pairs well with many foods.

It’s also low in calories and carbs, making it an excellent lower-carb alternative to starchy vegetables like potatoes and sweet potatoes (10).

The Jerusalem artichoke (Helianthus tuberosus)is a type of sunflower grown for its edible tubers, which are commonly known as sunchokes.

A good source of many nutrients, Jerusalem artichokes are especially high in iron, which is essential for red blood cell production, and inulin, a type of fiber that may promote digestive health and blood sugar control (11, 12Trusted Source).

Chayote belongs to the same family as pumpkins and zucchini.

Although low in calories, it’s packed with vitamins and minerals. One cup (132 grams) of raw chayote contains just 25 calories, yet delivers over 30% of the daily value (DV) for folate, a B vitamin involved in DNA synthesis and cellular function (13).

All parts of the dandelion plant (Taraxacum officinale)are edible, including the leaves, which are known as dandelion greens.

Though not as popular as other leafy greens, they’re loaded with an array of vitamins, minerals, and potent plant compounds, including vitamin K, iron, and polyphenol antioxidants (14).

What’s more, they can be enjoyed raw or cooked and make a great substitute for other greens like spinach or lettuce.

Fiddleheads are the flavorful leaves of young ferns that have not yet unfolded. Popular among foragers, they’re harvested from immature ferns and have a tightly wound, curled shape.

Fiddleheads are rich in nutrients and plant compounds, such as provitamin A, vitamin C, and manganese (16).

Their carotenoid plant pigments include lutein and beta carotene, which have antioxidant and anti-inflammatory effects and may protect against various conditions like certain cancers and eye diseases (17, 18Trusted Source).

Fiddleheads are easily incorporated into stir-fries, soups, and pastas.

Jicama is the edible root of the Pachyrhizus erosus vine. Turnip-like in shape, it has white, mildly sweet flesh.

This tuberous vegetable is loaded with vitamin C, a water-soluble vitamin that’s important for immune health and acts as an antioxidant (19).

Jicama is also packed with fiber, including inulin, a prebiotic that’s good for your gut health (20Trusted Source).

Cassava, also known as yuca, is a root vegetable that looks like a sweet potato but has a milder, nuttier taste.

Often mashed, fried, or roasted, it must be cooked to reduce its levels of cyanogenic glycosides, which may impair thyroid function (21).

Celeriac is a peculiar root vegetable that’s closely related to celery and parsley.

It has a celery-like taste that makes an excellent low-carb substitute for potatoes in soups and stews, though it can also be enjoyed raw.

Celeriac is likewise a great source of phosphorus, potassium, and vitamins C and K (24).

Rutabagas, also called swedes, snaggers, or neeps, are a cruciferous vegetable in the same family as kale, cauliflower, and cabbage.

They’re believed to be a cross between a turnip and a cabbage and closely resemble turnips in appearance. However, they have rougher skin and a milder flavor.

Rutabagas are low in calories but rich in nutrients like fiber, vitamin C, phosphorus, potassium, manganese, and magnesium, making them a nutrient-dense veggie that can be enjoyed raw or cooked (25).

Research shows that brassica vegetables — which include romanesco, broccoli, and cabbage — are rich in polyphenol antioxidants and other plant compounds that have potential anticancer and immune-boosting effects (26Trusted Source).

Bitter melon (Momordica charantia) is a gourd grown worldwide and prized for its powerful medicinal properties.

Many varieties exist, though all have a bitter taste. They’re often used in dishes like soups, curries, and stir-fries.

The vegetable has long been used in traditional medicine to treat a variety of conditions, such as diabetes, pneumonia, kidney disease, and psoriasis (30Trusted Source).

Test-tube and animal research demonstrates that bitter melon has anti-inflammatory, anticancer, and anti-diabetes effects due to its abundance of plant compounds (30Trusted Source).

Purslane is an edible weed that grows naturally in fields and lawns. Technically a succulent, it has glossy leaves and a lemony flavor.

Purslane is very low in calories, delivering just 9 per 1-cup (43-gram) serving. At the same time, it boasts an impressive amount of potassium, magnesium, and alpha-linolenic acid (ALA), a plant-based omega-3 fat (31Trusted Source).

Mashua is a flowering plant native to South America that produces an edible tuber with a pungent, peppery flavor.

The tubers come in various colors — including yellow, red, and purple — and have been shown to provide antibacterial, anti-inflammatory, and antioxidant effects in animal and test-tube studies (33Trusted Source).

However, according to research in rodents, mashua may harm testicular function. As such, it should be eaten in moderation (34Trusted Source).

Mashua is often cooked but can also be served raw.

Popular in Mexican cuisine, tomatillos are members of the nightshade family, which includes tomatoes and eggplants.

Tomatillos resemble tomatoes and are covered in a papery husk that’s removed before eating.

When ripe, they take on a green, purple, or red hue, depending on the variety. Tomatillos can be picked at different points of ripening, offering a tart taste when young and sweeter flavor when mature.

Ramps are a type of wild onion that’s native to North America and closely related to garlic and shallots. Their strong, garlicky aroma and rich flavor make them popular among chefs and foragers alike (36Trusted Source).

Ramps are a concentrated source of vitamin C, which enhances iron absorption and safeguards against cellular damage and infections (37, 38Trusted Source).

Salsify is a root vegetable that resembles a long carrot. It comes in white and black varieties, each with a distinct flavor and appearance.

Black salsify has dark skin and is often called “vegetable oyster” due to its mild oyster-like flavor. On the other hand, the white variety has tan skin and is said to taste like artichoke hearts.

Both types make excellent substitutes for other root vegetables like potatoes and carrots and are high in many nutrients, including vitamin C, several B vitamins, and potassium (42).

Plus, salsify may promote feelings of fullness and reduce cholesterol levels due to its high fiber content (43Trusted Source, 44Trusted Source).

Daikon, bitter melon, romanesco, and purslane are just a few of the thousands of uncommon but highly nutritious vegetables grown around the world.

Adding some of these veggies to your diet will not only expand your palate and add flavor to your dishes but also potentially boost your overall health.

Don’t be afraid to try these unique vegetables if you spot them at farmers markets or your local grocery store.

Reposted with permission from our media associate Healthline.