The best of EcoWatch, right in your inbox. Sign up for our email newsletter!
supplements 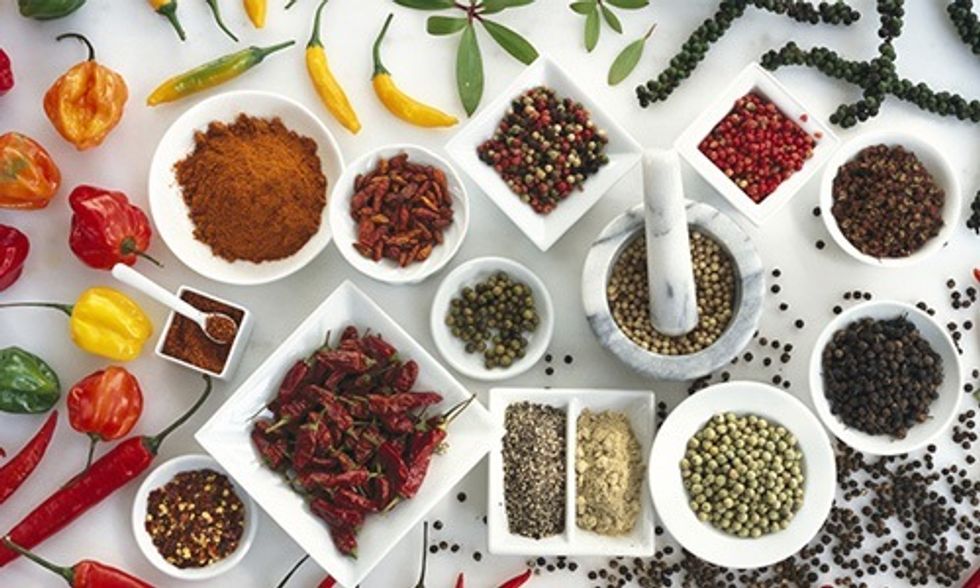 Inflammation is your body's protective response to injury or damage. It helps your natural healing and repair processes. A problem starts when your body is chronically inflamed. Many modern stressors, such as pollution, food sensitivities and carrying extra weight, can lead to chronic inflammation.

There are many different herbs and spices that can help you reduce or prevent inflammation in your body.

Chronic inflammation has been linked to a wide variety of diseases, including cancer, diabetes, Alzheimer's disease, heart disease and attention deficit disorder (ADD).

You don't have to accept inflammation as a part of modern life. There are many different herbs that can help you reduce or prevent inflammation in your body.

The anti-inflammatory agent in turmeric is its yellow pigment called curcumin. Ayurvedic and Chinese medicines have long used turmeric and curcumin to reduce inflammation as well as treat digestive disorders, wounds and infections.

Studies have shown that curcumin also acts as an antioxidant and may combat cancer. Fresh or powdered turmeric is excellent in curries, soups or other dishes. Fresh turmeric can be added to fresh vegetable juices. Supplements of curcumin are also available.

The preventative effects of green tea against cardiovascular disease and cancer are well established. More recent studies have shown that green tea can be an effective anti-inflammatory, particularly in the treatment of arthritis. It can also reduce inflammation of the digestive tract, potentially helping conditions like Crohn's disease or ulcerative colitis.

It's recommended to drink 3 to 4 cups of tea daily. Green tea extract can also be found in pill form. And for those who don't want the caffeine, decaffeinated green teas are available.

White willow tree bark has been used as a treatment for pain and inflammation since ancient Egyptian and Roman times. Many studies have shown that white willow bark has a comparable effect to aspirin, but with fewer side effects than aspirin.

Bark from the maritime pine tree (Pinus maritima) can be processed into pycnogenol. This extract has been used for more than 2,000 years to help heal wounds, scurvy and ulcers as well as reducing vascular inflammation. It is one of the strongest antioxidants known today.

Studies have shown that pycnogenol is 50 to 100 times more potent than vitamin E in neutralizing free radicals in the body. It has also been found to reduce blood pressure and the risk of blood clots. A typical dosage is 100-200 mg daily.

The countless varieties of hot peppers we have today began as one small shrub (Capsicum annum), native to tropical regions of the Americas. The chemical capsaicin is what makes a pepper hot. And it's capsaicin that's been shown to have an anti-inflammatory effect in your body.

Any type of chili pepper, such as cayenne or jalapeno, contains capsaicin. You can use chili peppers fresh or powdered in a wide variety of dishes, including desserts. Supplements containing capsaicin are often mixed with other herbs to create natural anti-inflammatory blends.

Boswellia is a tree variety native to India, Somalia, Ethiopia and the Arabian Peninsula. Frankincense is a resin extracted from the trees. It has anti-inflammatory, anti-arthritic and pain-controlling properties. Boswellia resin is currently used to treat degenerative and inflammatory joint disorders.

One study showed that a combination of Boswellia and curcumin was more effective for treating osteoarthritis than a commonly used synthetic drug. It's recommended to take 300-500 mg of Boswellia extract two or three times a day for ongoing inflammatory conditions.

This unassuming spice actually packs an anti-inflammatory punch. The distinctive flavor of black pepper comes from the chemical piperine. Even at low doses, piperine has been shown to reduce inflammation. It can inhibit the spread of cancer and has been shown to suppress the perception of pain and arthritis symptoms.

This is an antioxidant found in many plants. The highest amounts have been found in Japanese knot weed (Polygonum cuspidatum) and in the skins of red wine grapes. Resveratrol has been shown to be a strong anti-inflammatory. It also protects against DNA damage and mutations. You can find resveratrol as a common supplement in natural food stores. A typical dosage is from 50 to 500 mg per day.

This herb is derived from a woody vine native to Peru. The bark of cat's claw has traditionally been used to treat arthritis, bursitis and intestinal disorders. Studies have shown that it can reduce inflammatory responses in the body and it has a protective effect against gastrointestinal inflammation.

You can make a tea from cat's claw from either a prepared tea or use 1000 mg of the bark to 8 ounces of water. It is also available as a dry extract in a capsule. It's recommended to take 20 to 60 mg daily.

In one study, participants were given small amounts of various common herbs and spices for a period of 7 days. Rosemary showed one of the strongest protective effects against inflammation and oxidation.

The other top spices were turmeric, cloves and ginger. The researchers noted that the amounts given of each herb were no more than what someone would normally eat in a seasoned soup, sauce or other dish.

Clove oil can be applied directly to the gums to help with a toothache or for pain control during dental work. Cloves have been shown to reduce mouth and throat inflammation. Cloves can also be used to treat diarrhea, nausea, hernia, bad breath and as an expectorant.

The powdered or whole dried flower buds are delicious in many savory dishes as well as in desserts and hot drinks.

Research has shown that ginger has a better therapeutic effect than non-steroidal anti-inflammatory drugs to treat pain and inflammation. Ginger also inhibits the activation of several genes involved in an inflammatory response.

According to the University of Maryland Medical Center, ginger may help prevent or treat nausea and vomiting from motion sickness, pregnancy and chemotherapy. It can also be used to reduce osteoarthritic pain and heart disease. Ginger is delicious in many savory dishes, as well as in teas, juices and desserts.

This popular spice is made from the bark of cinnamon trees native to China, India and Southeast Asia. In addition to being anti-inflammatory, cinnamon has been shown to have antioxidant, antidiabetic, antimicrobial, anticancer and lipid-lowering properties. It has even been found to act against neurological disorders like Parkinson's and Alzheimer's diseases.

Cinnamon goes well in anything from breakfast grains, to soups and stews, to desserts and drinks. Any pre-made apple pie or pumpkin pie spice mixes will often have cinnamon, cloves and ginger all in one tasty blend.

If you make a purchase using the links above, EcoWatch may earn a commission.