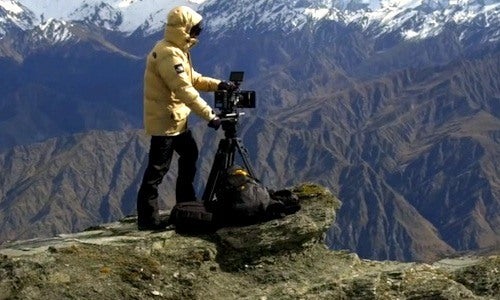 Spider silk is known as some of the toughest material on Earth, but would you ever wear it as clothing? The North Face has teamed up with Japanese biomaterials company Spiber to create the Moon Parka, reportedly the “world’s first successful use of synthetic spider silk materials on an actual manufacturing line.”

According to Gizmag, this synthetic spider silk is made by “decoding the gene responsible for the production of fibroin in spiders and then bioengineering bacteria with recombinant DNA to produce the protein, which they then spin into their artificial silk.”

While regular spider silk would never be able to make enough fiber for a coat, Spiber researchers have engineered a cell that is capable of producing enough of this material for commercial production.

Besides outwear, there could be many other future applications of this incredibly sturdy material, such as surgical materials, artificial blood vessels and ligaments, auto parts and bulletproof vests as Gizmag notes.

The coat’s golden color takes after the natural color of QMONOS thread from the Golden Orb spider. The embroidered logos on the coat are also made from black QMONOS thread.

However you feel about wearing genetically modified clothing, marketing company Goldwin Inc. boats in a press release for the Moon Parka that there are potential environmental benefits to using biomaterials over traditional textiles.

Additionally, whereas QMONOS thread is biodegradable, many popular outwear brands use petroleum based fabrics such as polyester or nylon. The fluorocarbon chemicals, or polyfluorinated chemicals (PFCs), which makes their garments water- and soil-resistant, happens to be terrible for our health and the environment.

A prototype of the North Face coat is currently touring around Japan and could hit our markets by next year. The price has yet to be announced. Learn more about the product in the video below: