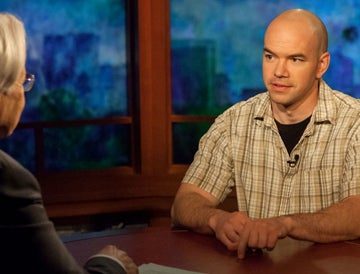 During the closing weeks of the Bush White House, 27-year-old environmental activist Tim DeChristopher went to protest the auction of gas and oil drilling rights to more than 150,000 acres of publicly-owned Utah wilderness. But instead of waving a sign, DeChristopher disrupted the proceedings by starting to bid. Given an auction paddle designating him “Bidder 70,” DeChristopher won a dozen land leases worth nearly $2 million. He was arrested for criminal fraud, found guilty and sentenced to two years in federal prison—even though the new Obama Administration had since declared the oil and gas auction null and void.

DeChristopher—who was released less than a month ago—joins Bill Moyers to talk about the necessity of civil disobedience in the fight for justice, how his jury was ordered to place the strict letter of the law over moral conscience and the future of the environmental movement. Bidder 70, a new documentary chronicling DeChristopher’s legal battle and activism, opened May 17. DeChristopher is co-founder of the grassroots environmental group Peaceful Uprising.

“When I went into this, I was pretty focused on the direct impacts of my actions, keeping that oil under those parcels and stopping this particular auction,” DeChristopher tells Bill. “I think those impacts turned out to be much more important than just keeping that oil in the ground.”

Across America, government-controlled lands are leased to companies seeking to turn a profit on the fossil fuels that lie beneath. Among those lands are some national parks, preserves, forests and seashores.