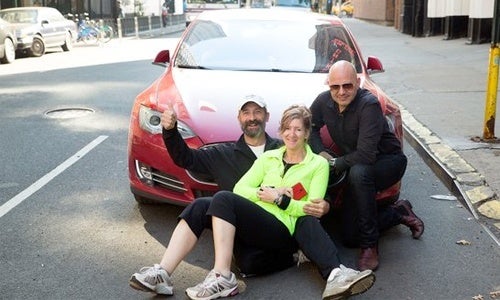 A Tesla Model S completed a cross-country road trip in record time for an electric vehicle—and the car drove itself almost the entire way. Three friends—Carl Reese, Deena Mastracci and Alex Roy—made the trek from Redonda Beach, California to New York City in 57 hours and 48 minutes, according to Wired.

The autopilot feature was added as an update to Tesla cars just last week. Stephen Colbert, a proud Tesla owner, has already expressed how ecstatic he was about the new feature on the Late Show. Although there have already been some mishaps among Tesla drivers, even though Tesla CEO Elon Musk warned drivers to be very careful because the technology is so new.

But the trio’s cross-country journey “highlights how quickly and enthusiastically autonomous technology is likely to be adopted, and how tricky it may be to keep in check once drivers get their first taste of freedom behind the wheel.” As Colbert said on the Late Show, “this technology is self-driving towards us whether we like it or not.”

The group’s time still has to be verified by an independent third party, according to Wired. Regardless, their journey sounded harrowing.

They covered 2,994 miles at an average speed of 51.8 mph, a figure that includes the time spent plugged into Supercharger stations along the way. They had autopilot mode engaged 96 percent of the time, Reese says, using it at speeds around 90 mph. It eased the burden on the team, a big deal when you’re in a car for 57 hours straight.

Autopilot caused a few scares, Roy says, largely because the car was moving so quickly. “There were probably three or four moments where we were on autonomous mode at 90 miles an hour, and hands off the wheel,” and the road curved, Roy says. Where a trained driver would aim for the apex—the geometric center of the turn—to maintain speed and control, the car follows the lane lines. “If I hadn’t had my hands there, ready to take over, the car would have gone off the road and killed us.” He’s not annoyed by this, though. “That’s my fault for setting a speed faster than the system’s capable of compensating.”

Laws will have to catch up with technology as there are very few rules governing autonomous driving. Even Roy, a trained racing driver, admits that “there’s no reason this car should be allowed to go 20 or 30 miles per hour over the speed limit in autonomous mode.” Still, Musk and Tesla congratulated the team on Twitter.

Congrats on driving a Tesla from LA to NY in just over two days! https://t.co/hjAnAAIdMB

And this isn’t even the crew’s first record-breaking trip. In April, Reese and Mastracci set a record for the least amount of time spent charging an electric vehicle while driving across the country. And Roy set an unofficial record in 2006, driving from New York to LA in just 31 hours and four minutes.

Watch them refuel at the Supercharging station in Englewood, Ohio: