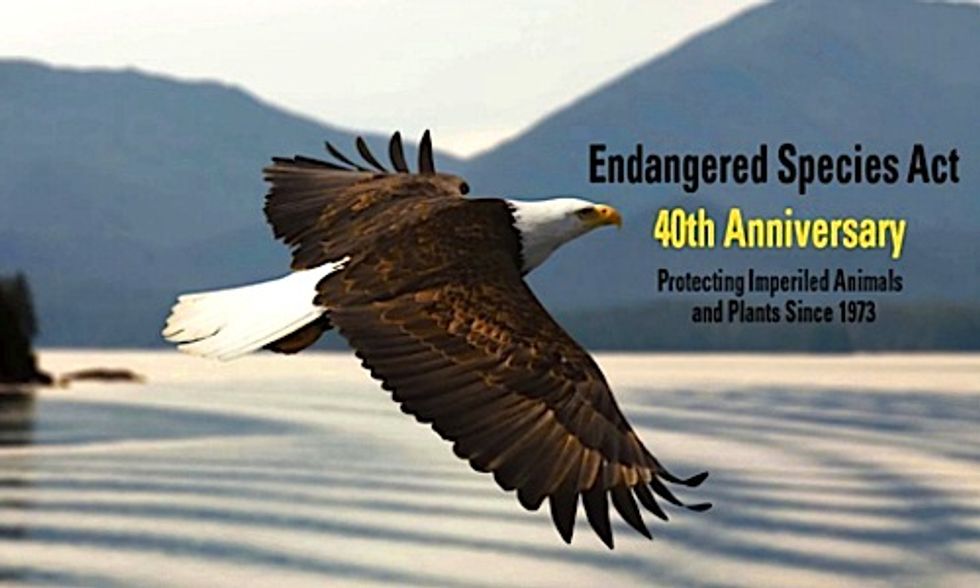 Tea Party senators introduced a bill last week that would effectively end the protection of most endangered species in the U.S. by gutting some of the most important provisions of the Endangered Species Act. Senate Bill 1731, introduced by Tea Party members Sen. Paul (R-KY), Sen. Lee (R-UT) and Sen. Heller (R-NV) would end protections for most of the species that are currently protected by the act and make it virtually impossible to protect new species under the law. It would also eliminate protection for habitat that’s critical to the survival of rare and struggling animals and plants around the country.

“Here we are celebrating the fortieth anniversary of the Endangered Species Act this year, and the Tea Party wants to tear it limb from limb,” said Brett Hartl, endangered species policy director at the Center for Biological Diversity. “It’s really a sad testament to how out of touch the Tea Party has become with the American people, and how beholden they are to industry special interests that are more interested in profits than saving wildlife, wild places and a livable future for the next generation.”

In its 40-year history, the Endangered Species Act has been more than 99 percent successful at preventing extinction for wildlife under its protection and has put hundreds of plants and animals on the path to recovery, including bald eagles, grizzly bears, whales and sea turtles.

Despite this successful track record, the bill’s most extreme provision would require that every five years all protected species be removed from the list of threatened and endangered species, eliminating all legal protections. No matter how close to extinction they might be, every listed species would then have to wait until Congress passed a joint resolution renewing their protections under the act for another five years. Five years later, this process would start over again, eliminating all protections until Congress passed another joint resolution.

“The strength of the Endangered Species Act—in fact all of our nation’s environmental laws—comes from the requirement that science, not politics, guide the protection of our wildlife, air and water,” said Hartl. “This bill would allow extreme ideologues in Congress to veto environmental protections for any protected species they wanted, just so they could appease their special-interest benefactors.”

The bill would eliminate all protections for the critical habitat of endangered species and allow state governments to effectively veto any conservation measures designed to protect an imperiled species within their respective state. Meanwhile federal wildlife agencies would need to complete onerous accounting reports to estimate the costs of protecting endangered species rather than completing tangible, on-the-ground conservation activities to protect species and the places they live.

“This bill would devastate species protections and open the door to log, mine and pave some of the last places on Earth where these animals survive,” Hartl said. “It’s a boon for profiteers like the Koch Brothers but will rob every American who values wildlife and wild places.”