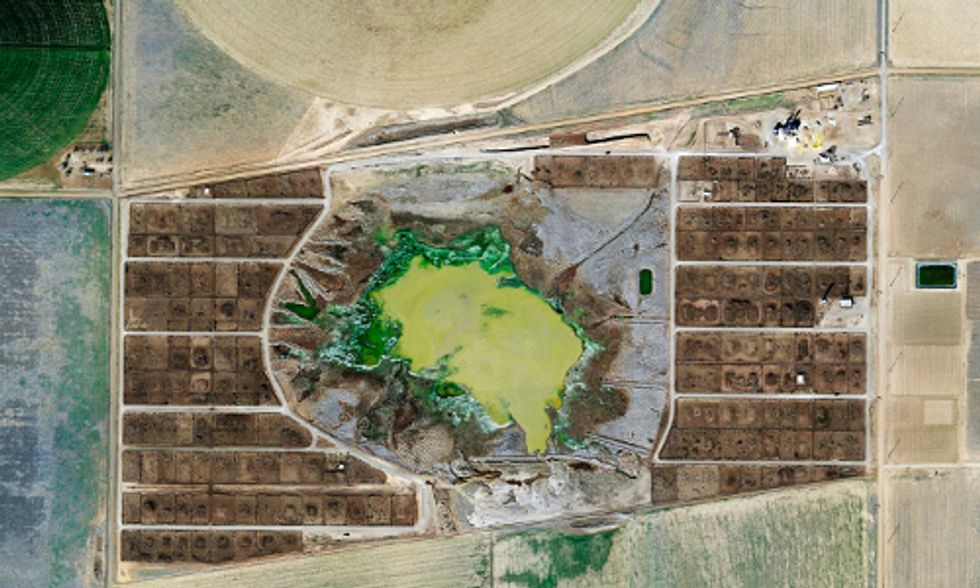 Industrial-grade production of livestock animals has become the norm in the U.S. with 99 percent of all farmed animals raised on giant factory farms or CAFOs (Confined Animal Feeding Operations).

These feedlots confine thousands of animals in small spaces before they are slaughtered, leading to a litany of abuses: the confinement inflicted on the animals, the use of preventive antibiotics to control the spread of diseases in such close quarters, poor working conditions and worker abuse, destruction of rural communities, small towns and family farms, overconsumption of resources, legendary "manure lagoons" stinking up the countryside holding animal waste unsuitable for fertilizer because of the way they are raised and fed, and climate change-inducing greenhouse gases they produce.

British artist Mishka Henner, who has had a longtime fascination with the interaction of human activity and the landscape, was flying over the country looking for satellite images of oil fields when the feed lots caught his eye and he began to photograph them and learn more about them. His photos combine an abstract visual beauty with a visceral revulsion to the activities they depict.

"The feedlots are a brilliant representation of how abstract our food industry has come," Henner told Business Insider. "It’s an efficient system for extracting the maximum yield from animals. That’s the world we live in now. We want to extract the maximum yield from everything, no matter what business you are in."

Seven states now have so called "ag-gag" laws which prohibit any kind of filming or recording of these farms, after videos by groups like Mercy for Animals produced an outcry of demands for laws ending the abuses of the CAFOs. Henner did not physically set foot on any of the farms, but he says he's been warned that his photos might violate these laws and that they are one reason they have not been more widely seen. But you can find out more about his photos and purchase prints here. He is represented by the Bruce Silverstein Gallery in New York.