‘We Won’t Allow Trump to Foreclose on Our Future’ 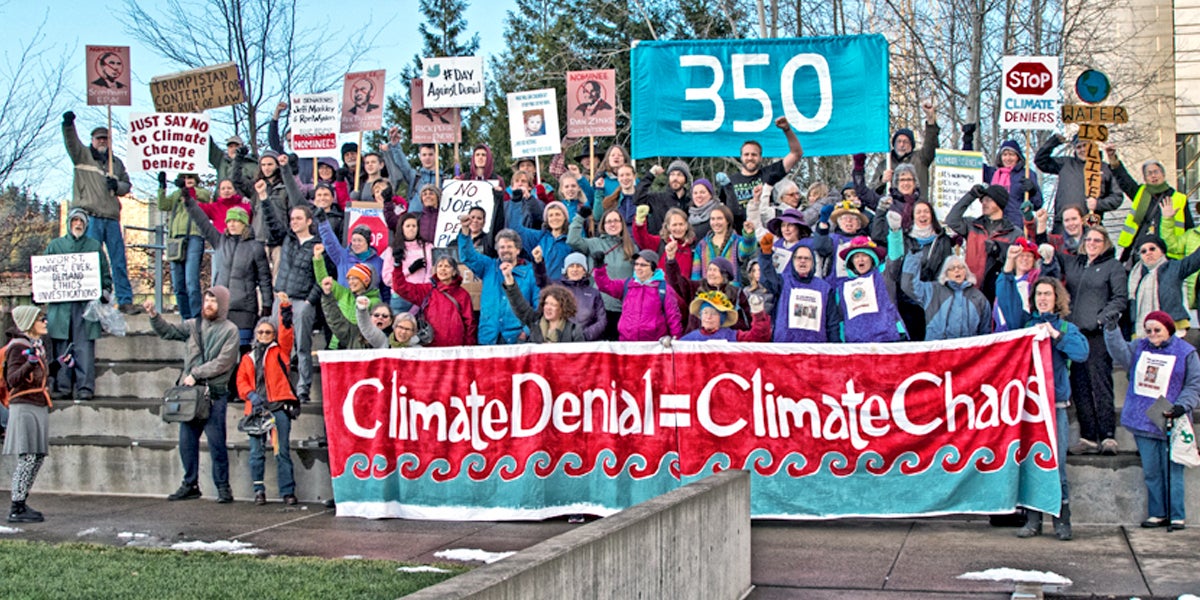 Within 100 hours of Donald Trump‘s inauguration, in the first and largest youth-led mobilization of 2017, thousands of students across the country walked-out of class in protest of Trump and his corrupt fossil fuel billionaire cabinet. This comes just two days after nearly 3 million people mobilized in Women’s Marches around the world. Students on dozens of campuses across the country are demanding administrations resist and reject Trump’s climate denial cabinet by divesting from fossil fuels and reinvesting in solutions to the climate crisis.

“In the face of Trump’s dangerous climate denial, youth are rising up,” said Greta Neubauer, director of the Divestment Student Network. “For any chance at curbing the worst impacts of climate change, our universities must stand on the right side of history with students and take action now against Trump’s climate denial. We won’t allow Trump and his fossil fuel billionaire cabinet to foreclose on our future.”

Monday’s day of action, dubbed #ResistRejectDenial, is also the largest youth-led mobilization in the history of the fossil fuel divestment movement. Students and youth have been a driving force leading the fossil fuel divestment movement to be the mainstream global movement it is today, with more than 600 institutions across 76 countries representing more than $5.2 trillion in assets committing to some level of divestment.

“I need my university to stand up for our futures under Trump’s dangerous and corrupt climate denial,” said Samantha Smyth, sophomore at Appalachian State University. “We must disavow the blatant disregard for our well-being and future by climate deniers in office. We must stand up for the millions of people who are dying at the hands of powerful, morally corrupt individuals who deny climate change.”

Prior to election day, young people proved themselves a force to be reckoned with. This was demonstrated in unprecedented political engagement throughout the election, challenging candidates to take stronger stances on climate, as well as in youth organized sit-ins at senate offices, engagement in mass mobilizations such as Women’s Marches and the #DayAgainstDenial and rallying to oppose Trump’s corrupt climate-denying appointees.

Young people have been a driving factor in pushing our institutions to stand on the right side of history, with two consecutive years of on-campus escalation from 100 campuses, resulting in more than 30 arrests, with victory at the University of Massachusetts, University of California and University of Oregon. Since 2014, thousands of students across the country have participated in national escalation for fossil fuel divestment.

Beyond fossil fuel divestment, young people are taking action to ensure elected officials take necessary action on climate and against Big Oil. In an ongoing lawsuit, 21 young people from across the U.S. filed a landmark lawsuit against the federal government for its failure to address the effects of climate change.

“This is a wake up call to Donald Trump; there are almost 75 million people in this country under the age of 18,” said Xiuhtezcatl Martinez, youth director of Earth Guardians and a plaintiff in the federal climate change lawsuit. “We didn’t have an opportunity to vote in the past election, but we will suffer the consequences of climate inaction to a greater degree than any living generation. Our right to a just and livable future is nonnegotiable.”

Just last week, the World Meteorological Organization confirmed that 2016 was the hottest year on record and the second hottest year in U.S. history surpassing records of 2015 and 2014. Extreme weather, including storms, floods and droughts, are impacting communities at a pace and magnitude far exceeding previous predictions, making it even more crucial that institutions divest and take meaningful action on climate.

"It's Official: 2016 Was the Hottest Year Ever Recorded" via @ClimateNexus/@EcoWatch: https://t.co/meonGdUrDY

“Hope is something we must create. In this moment, the best way to do that is by taking action and showing that we will rise to this moment,” said Neubauer. “When it comes to climate change, time is not on our side. This is just the beginning of the opposition that the Trump’s Administration should expect from young people”