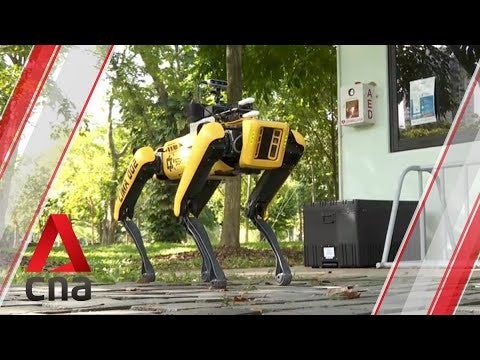 The government of Singapore has deployed a robot dog in a local park to remind visitors of the importance of social distancing during Covid-19, according to CNN.

The four-legged creation from American company Boston Dynamics started its patrol of the park over the weekend, broadcasting a prerecorded message about how to maintain a safe distance from other people, authorities in Singapore said, as CNN reported.

The agile dog has been used in the past to diffuse bombs, inspect oil rigs, and to carry supplies to medical workers fighting the coronavirus, according to Popular Mechanics.

The dog, named Spot, will patrol the city’s Bishan-Ang Mo Kio Park as part of a two-week trial. It will roam the park during off-peak hours. It is also being used at a local isolation facility where the robot helps bring medicine to patients, according to CNN.

It’s outfitted with cameras that will be used to estimate the number of visitors to the park, but Singapore’s National Parks Board (NParks) said it will not collect personal data nor use the video to identify individuals, according to The Verge.

“These cameras will not be able to track and/or recognize specific individuals, and no personal data will be collected,” the government said in a statement.

The dog is remotely controlled, and has built in sensors to stop it from colliding into park goers, but a guide will accompany Spot as well. According to NParks, if the trial is successful, the robot may be deployed full-time during peak hours in the park, as The Verge reported. It may also be expanded to include other parks and heavily trafficked areas that the government owns.

“Spot will be controlled remotely, reducing the manpower required for park patrols and minimizing physical contact among staff, volunteer safe distancing ambassadors and park visitors,” the government noted in its release, as Popular Mechanics reported. “This lowers the risk of exposure to the virus.”

Singapore seemed to have tamped down on Covid-19 cases, until an alarming second wave of cases sprang up recently. While Singapore was initially praised for its response to the coronavirus, the second wave revealed clusters that were overlooked in initial testing. Since March 17, Singapore’s number of confirmed coronavirus cases grew from 266 to 21,707 cases, according to data from Johns Hopkins University, as CNN reported.

On social media, people have reacted harshly to the idea of robot patrolling, worrying that a dystopian future has arrived. On Twitter, people shared an image of a poster in the park, asking people not to bother Spot.

Another Twitter user posted a video of Spot’s paws clanking on the concrete as he patrolled the park and people scurrying away from the robot dog. “People do not know how to handle this new participant in society,” the Twitter user wrote along with the video of Spot.

While another wrote, “This is so scary. Camera-equipped, remote-controlled, four-legged robot is patrolling a park in Singapore to enforce social distancing amid #COVID19 pandemic.”

Demand for technology from robot companies has skyrocketed recently as companies and governments look for new ways to deploy the technology, according to The Verge. After all, Spot has been mostly deployed for public safety reasons, such as helping “inspect hazardous packages from afar,” according to Boston Dynamics, as CNN reported.

As The Verge noted, “Acting as a loudspeaker-on-legs may only be the beginning for these robot deployments.”