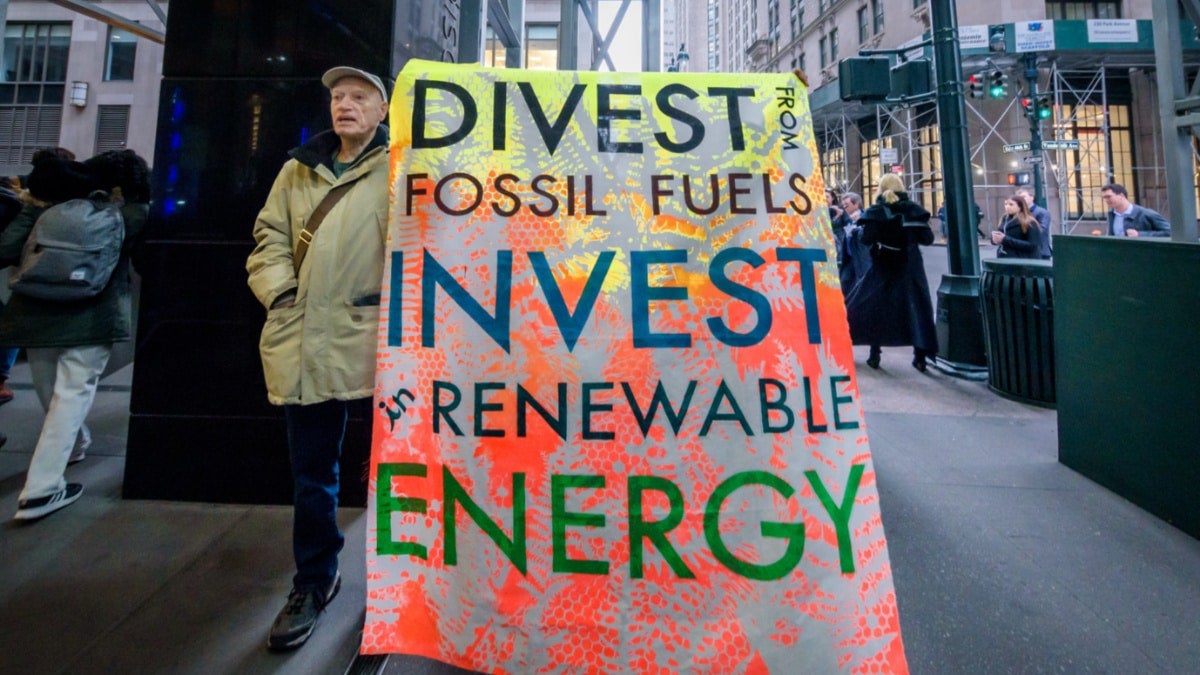 A Stop the Money Pipeline protester holds a banner outside JP Morgan headquarters in NYC on Feb. 25, 2020; JP Morgan is a top contributor to the fossil fuel industry. Erik McGregor / LightRocket / Getty Images

Green groups applauded Sen. Jeff Merkley on Wednesday for introducing a pioneering pair of bills that aim to “protect the long-term health and well-being of the American people and their economy from the catastrophic effects of climate chaos” by preventing banks and international financial institutions from financing fossil fuels.

“How we invest our money reflects our values today and will drive our future tomorrow,” the Oregon Democrat said in a statement about his new legislative proposals, citing a September report from the Commodity Futures Trading Commission warning that the human-caused climate crisis endangers the U.S. financial system.

“Fossil fuel investments play a key role in accelerating climate chaos, which continues to spiral further and further out of control and claim lives and livelihoods in the process,” Merkley added. “It’s time to prioritize the interests of the American people and the planet above the wishes of fossil fuel CEOs who want to hold our economy hostage.”

The Protecting America’s Economy from the Carbon Bubble Act of 2020 “would help safeguard the economy by prohibiting financial companies from making new investments in fossil fuels,” according to his office. The Sustainable International Financial Institutions Act of 2020 “would elevate that priority to the international stage by ensuring that the United States uses its voice and vote in international financial institutions to divest from fossil fuel investments.”

This is how we stop the money pipeline between Wall Street and the fossil fuel industry. https://t.co/YTnfeVIW1M

The legislation was enthusiastically endorsed by members of Stop the Money Pipeline, a coalition of over 130 advocacy organizations that launched in January to pressure asset managers, banks, and insurance companies to “stop financing fossil fuels and deforestation and start respecting human rights and Indigenous sovereignty.”

Kelly Martin, director of the Sierra Club’s Beyond Dirty Fuels campaign, similarly said that “we applaud Sen. Merkley for his leadership in working to cut off the flow of money to dirty and destructive fossil fuels.”

“Investments from major financial institutions are driving the climate crisis and environmental injustice worldwide,” Martin added. “In order to tackle this crisis, we need to put a stop to business as usual and reinvest in a clean energy economy that works for all of us.”

"When there’s an out of control fire, the worst thing you can do is pour more gas on it. It’s time for Congress step up and stop our banks and government from fueling the climate crisis"

Sue Stafford and Toby Woll of Mothers Out Front Corporate Responsibility Team called Merkley’s legislation “important and necessary” while Nikki Reisch of the Center for International Environmental Law said that “ending financing for fossil fuels should be a no-brainer.”

“As this year has made abundantly clear, fossil fuels are not just terrible for people and the planet, they are terrible investments, too,” Reisch continued. “Sen. Merkley’s bills would finally require financial institutions to do what they should have long since done on their own: stop bankrolling climate catastrophe.”

While welcoming the senator’s bills, campaigners also slammed financial institutions for “driving the destruction of the climate, deforestation, and furthering harms to public health and communities” by “pouring billions into the dying fossil fuel industry,” in the words of Osprey Orielle Lake, executive director of the Women’s Earth and Climate Action Network.

Lake urged Congress to urgently enact the measures—a call that was echoed by Lukas Ross from Friends of the Earth U.S., who warned that “whether it is Wall Street behemoths or public institutions like the Export-Import Bank, financial institutions are lending the climate over a cliff.”

We can't trust Wall Street to save the planet. It's time to step in and stop banks from funding climate destruction. https://t.co/WywSqwwJVw #StopTheMoneyPipeline

“Public and private banks are squandering over trillion annually subsidizing the destabilization of our global climate by the fossil fuel industry,” noted Daphne Wysham at the Center for Sustainable Economy. “Finally, in Sen. Merkley, we have a climate champion willing to stand up to this madness and call for banks to invest in a liveable future.”

According to a report released in March by climate advocacy groups, 35 global banks have collectively poured more than .7 trillion into the fossil fuel industry since the Paris climate agreement was finalized in late 2015. The four top spots were all held by U.S. institutions: JPMorgan Chase, Wells Fargo, Citi, and Bank of America.

“Sen. Merkley’s new divestment bills are exactly the sort of real climate leadership we need from our elected officials and regulators,” said David Turnbull of Oil Change International (OCI). “If banks won’t stop funding climate devastation, our government must force their hand, and Sen. Merkley’s bills would force the action we need.”

In addition to helping to ensure a habitable planet in the years to come, 350.org co-founder Bill McKibben pointed out that there could be some added benefits for lawmakers. As he put it: “Fighting the climate crisis and saving big money at the same time—a few more laws like this and people may start liking Congress!”