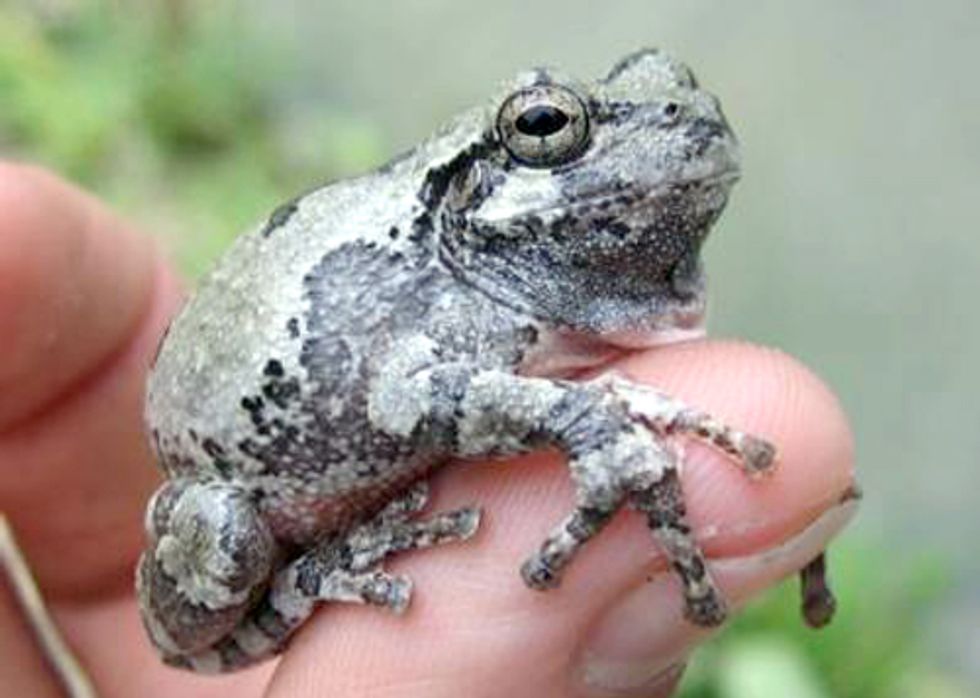 The world’s most popular weed killer can induce morphological changes in vertebrate animals, U.S. biologists studying its effect on amphibians say. University of Pittsburgh researchers have found that the weed killer Roundup, in sub-lethal and environmentally relevant concentrations, causes two species of amphibians to change their shape by interfering with the hormones of tadpoles and potentially many other animals.

The study, New effects of Roundup on amphibians: Predators reduce herbicide mortality; herbicides induce antipredator morphology is the first to show that a pesticide can induce morphological changes in a vertebrate animal, biological sciences Professor Rick Relyea, PhD, said in a university release. The study was undertaken using simple created wetlands and introducing tadpoles from three species of amphibians—the leopard frog, American toad and wood frogs. After three weeks, the tadpoles were examined. The impact of Roundup on the shape of tadpole tails was most noticeable in both the wood frog and leopard frog tadpoles.

According to the study, “In wood frog and leopard frog tadpoles, Roundup induced relatively deeper tails in the same direction and of the same magnitude as the adaptive changes induced by dragonfly cues… [T]his is the first study to show that a pesticide can induce morphological changes in a vertebrate. Moreover, the data suggest that the herbicide might be activating the tadpoles’ developmental pathways used for antipredator responses. Collectively, these discoveries suggest that the world’s most widely applied herbicide may have much further-reaching effects on nontarget species than previous considered.”

The presence of predators can cause tadpoles to change shape by altering the tadpoles’ stress hormones, causing them to grow bigger tails to better escape. But similar shape changes seen after exposure to Roundup suggest the weed killer may interfere with the hormones of tadpoles and potentially many other animals. “It was not surprising to see that the smell of predators in the water induced larger tadpole tails,” Dr. Relyea said. “That is a normal, adaptive response.” What shocked us was that the Roundup induced the same changes. Moreover, the combination of predators and Roundup caused the tail changes to be twice as large.”

Since tadpoles alter their body shape to match their environment, having a body shape that does not fit the environment can put the animals at a distinct disadvantage, the researchers said. “This discovery highlights the fact that pesticides, which are important for crop production and human health, can have unintended consequences for species that are not the pesticide’s target,” Dr. Relyea said. “Herbicides are not designed to affect animals, but we are learning that they can have a wide range of surprising effects by altering how hormones work in the bodies of animals.” This is important because amphibians not only serve as a barometer of the ecosystem’s health, but also as an indicator of potential dangers to other species in the food chain, including humans.”

Roundup is a systemic, broad-spectrum herbicide produced by Monsanto. Glyphosate, the active ingredient in Roundup, is a general herbicide used for eradication of broadleaf weeds. It has been linked to a number of serious human health effects, including increased cancer risk and neurotoxicity, as well as eye, skin, and respiratory irritation. Glyphosate is used in almost all agricultural and urban areas of the United States. The greatest glyphosate use is in the Mississippi River basin, where most applications are for weed control on genetically-modified corn, soybeans and cotton. Overall, agricultural use of glyphosate has increased from less than 11,000 tons in 1992 to more than 88,000 tons in 2007. Additionally, glyphosate persists in streams throughout the growing season in Iowa and Mississippi, but is generally not observed during other times of the year.

The inert ingredient POEA, formulated in Roundup products, has also been shown to kill human embryonic cells. It is also of particular concern due to its toxicity to aquatic species as well as instances of serious human health effects from acute exposure. One study found that Roundup alone is “extremely lethal” to amphibians in concentrations found in the environment. Another found that Rana pipiens tadpoles chronically exposed to environmentally-relevant concentrations of glyphosate formulations, containing POEA, exhibit decreased snout-vent length at metamorphosis, increased time to metamorphosis, tail damage and gonadal abnormalities. The U.S. Environmental Protection Agency (EPA) in its registration documents for glyphosate determined that glyphosate, its salts and metabolites are likely to impact adversely the endangered California red-legged frog based on prey and habitat reduction.

A report released last year finds that industry regulators have known for a long time that glyphosate causes birth defects. The report, RoundUp and Birth Defects: Is the public being kept in the dark? published by Earth Open Source, says that regulators misled the public about the safety of glyphosate for more than 20 years. In 2009, Beyond Pesticides, submitted comments to the EPA showing new and emerging science, which illustrates that glyphosate and its formulated products pose unreasonable risks to human and environmental health, and as such should not be considered eligible for continued registration. Some of the most widespread uses of glyphosate that have been attracting public attention include its use in invasive weed management and home gardening. The increase of glyphosate use in these areas is directly tied to the larger problem of poor land management, including over grazing, over development, soil compaction and other stressors.

U.S. Department of Agriculture (USDA) officials have also observed that the heavy use of Roundup due primarily to its use on Roundup Ready genetically engineered (GE) crops, appears to be causing harmful changes in soil and potentially hindering yields of crops that farmers are cultivating. The U.S. Geological Survey (USGS) has detected glyphosate in significant levels in rain and rivers in agricultural areas across the Mississippi River watershed, according to one of their recent reports. The greatest glyphosate use, according to USGS, is in the Mississippi River basin where most applications are for weed control on GE corn, soybeans, and cotton. “Roundup Ready” crops were designed to withstand Roundup herbicide and so, growing Roundup Ready crops such as soy, cotton and corn has led to greater use of the herbicide. It has also led to the spread of herbicide resistant weeds on millions of acres throughout the U.S. and other countries where such crops are grown, as well as contamination of conventional and organic crops, which has been costly to U.S. farmers. Because of GE crops, Roundup has become the most popular pesticide ever. USGS has submitted the studies to EPA to be included in data that is being considered as the agency reviews the registration of glyphosate. EPA expects the review to be complete by 2015, at which point it will issue a decision to either continue to allow unrestricted use of glyphosate or institute limitations or a ban on the chemical in light of emerging science.

For more news and information on “Roundup Ready” and other GE crops, see Beyond Pesticides’ genetic engineering page.