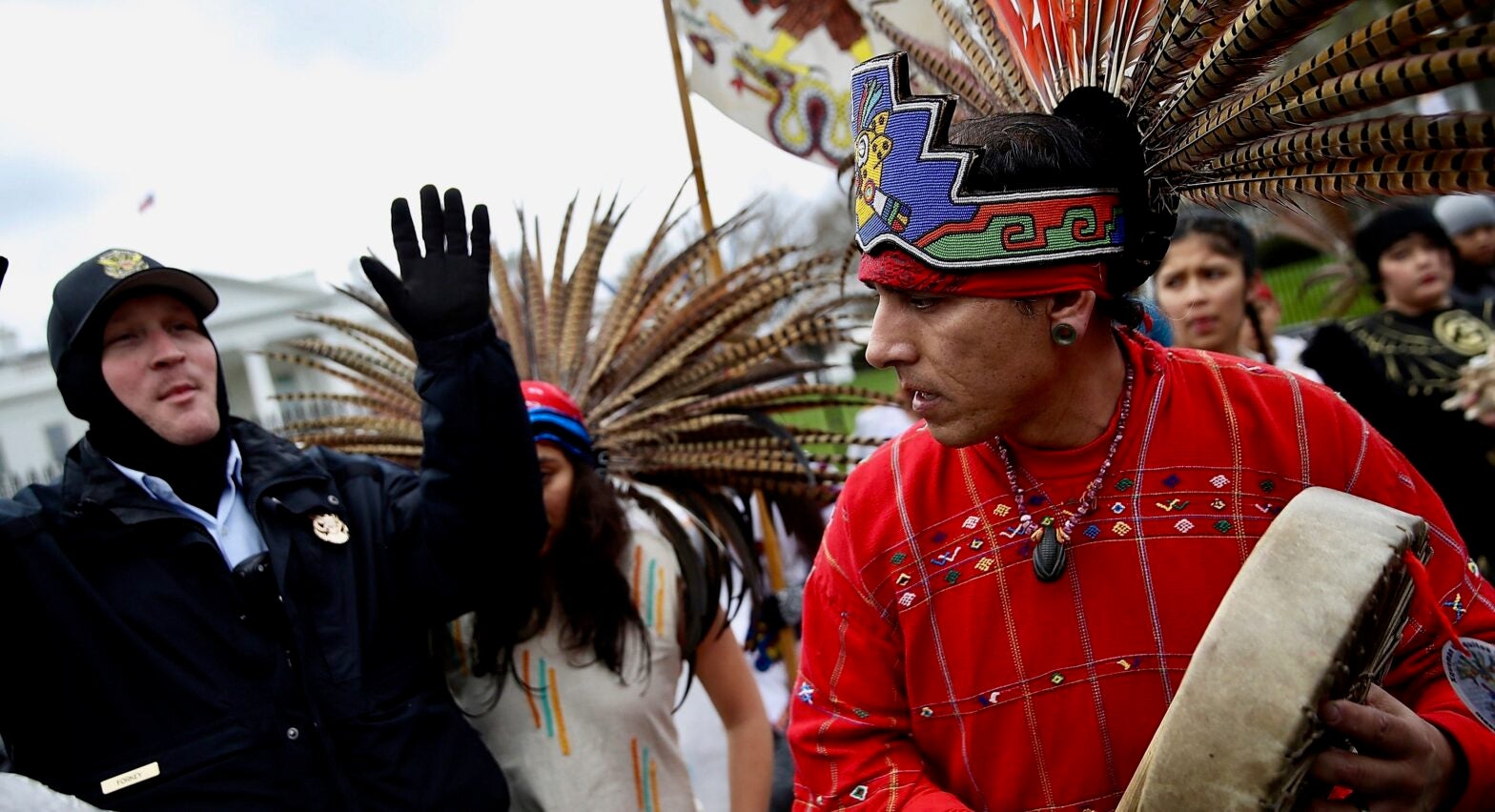 A police officer clears protesters off the sidewalk in front of the White House during a demonstration against the Dakota Access Pipeline on March 10, 2017. Justin Sullivan / Getty Images News

A new South Dakota law — written in consultation with the company that owns Keystone XL — could punish people for exercising their right to peaceful protest. Is it a harbinger of things to come?

America was born out of protest. Revolution and rebellion, bred in part by crackdowns on protests, affirmed that a protected right “peaceably to assemble” in support — or protest — of ideas affecting Americans’ lives was crucial to our fledgling democracy’s survival. And so, the very first amendment added to the newly ratified U.S. Constitution enshrined public protest as a right.

Thanks to the foresight of those who framed our Constitution, public protest has become a key component of our democratic process, a means by which the people can make their voices heard and effect real, even historic, change. The right to assemble played a crucial role in the women’s suffrage, civil rights, and antiwar movements, to name just a few. Still, in each of those instances, mobilized citizens had to contend with powerful, entrenched forces who fought back aggressively and did whatever they could to stifle these movements and preserve the status quo.

This same struggle is playing out again today. As the American and global communities grapple with the mounting climate catastrophe, the fossil fuel industry is holding nothing back in its attempt to silence its critics and those who assemble to protest their destruction of our shared climate. In a surprising number of states, antidemocratic legislation is being pushed through state legislatures with the backing of fossil fuel companies, conservative think tanks, and industry-tied mega-donors.

TC Energy (formally known as TransCanada), the company behind #KeystoneXL, helped to conceive the Riot Boosting Act: authorizing the state of South Dakota to sue people for protesting…including protesting projects like #KeystoneXL.

In March, Governor Kristi Noem of South Dakota signed legislation to usher in a new law that has come to be known informally as the Riot Boosting Act: an assault on Americans’ right to protest that perversely tries to pass itself off as a good-governance measure. Conceived with the assistance of TC Energy (TransCanada) — the company behind the embattled Keystone XL pipeline — this law would, among other things, authorize the state to sue individuals and groups for protesting projects like Keystone XL, should there be any damages as a result of the protest.

The insidious nature of this law becomes obvious on closer inspection. By coining a new term — “riot boosting” — South Dakota creates an atmosphere of vagueness and fear that aims to chill the voices of indigenous people and others who are passionately opposed to projects like Keystone XL. After all, the state already has a law on the books to punish those who might destroy property or put people in danger during a protest.

Indeed, the laws being pushed in Texas and passed in Louisiana are often flagged as the worst of the bunch. In Texas, House Bill 3557 would make some forms of protest a second-degree felony, on par with second-degree murder. It also contains the same long-arm provisions as the South Dakota bill, authorizing the state to go after organizations seen to have supported protesters with penalties of up to million. In Louisiana, a clever reclassification of oil pipelines as “critical infrastructure” now means that protesters assembled too close to pipelines can be prosecuted for criminal trespassing, a felony offense for which a conviction may bring prison time.

Many of these laws may be found unconstitutional. But while their constitutionality can be debated, one thing is beyond debate: They are deeply, profoundly un-American. The First Amendment right to peaceful assembly isn’t some bit of arcane legal wording that can be relaxed whenever it proves troublesome to corporate interests or their friends in high governmental places. It’s a bedrock principle of American freedom. And if it’s somehow decided that we don’t have the right, after all, to protest things that we believe pose a threat to our health, our communities, or our future, then we’ll have entered a new phase of American history that would make our nation’s founders shudder with fear.