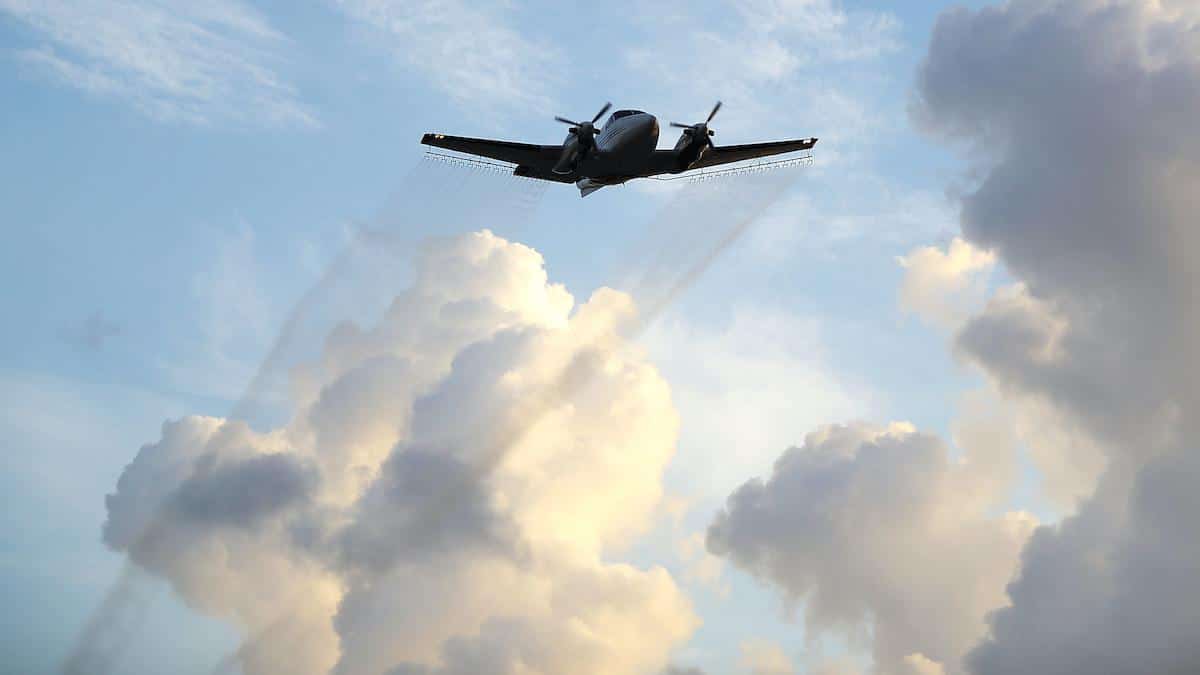 A plane sprays pesticide over the Wynwood neighborhood in the hope of controlling and reducing the number of mosquitos, some of which may be capable of spreading the Zika virus on Aug. 6, 2016 in Miami, Florida. Joe Raedle / Getty Images

A national nonprofit revealed Tuesday that testing commissioned by the group as well as separate analysis conducted by Massachusetts officials show samples of an aerially sprayed pesticide used by the commonwealth and at least 25 other states to control mosquito-borne illnesses contain toxic substances that critics call “forever chemicals.”

Officially known as per- and polyfluoroalkyl substances (PFAS), this group of man-made chemicals — including PFOA, PFOS, and GenX — earned the nickname because they do not break down in the environment and build up in the body. PFAS has been linked to suppressed immune function, cancers, and other health issues.

Lawmakers and regulators at various levels of government have worked to clean up drinking water contaminated by PFAS. The newly released results of pesticide testing by Public Employees for Environmental Responsibility (PEER) and the Massachusetts Department of Environmental Protection (MADEP) generated alarm about the effectiveness of such efforts.

“In Massachusetts, communities are struggling to remove PFAS from their drinking water supplies, while at the same time, we may be showering them with PFAS from the skies and roads,” PEER science policy director Kyla Bennett, a scientist and attorney formerly with U.S. Environmental Protection Agency (EPA), said in a statement Tuesday.

“The frightening thing is that we do not know how many insecticides, herbicides, or even disinfectants contain PFAS,” added Bennett, who arranged for the testing. “PEER found patents showing chemical companies using PFAS in these products, and recent articles discuss the variety of pesticides that contain PFAS as either an active or an inert ingredient.”

NEW: @PEERorg found that toxic PFAS “forever chemicals” were sprayed on millions of acres in MA & 25 other states. 😡 PFAS are linked to cancer, liver issues & more.

The product tested initially by PEER and subsequently MADEP, once the nonprofit alerted the department of its findings, is Anvil 10+10, produced by the Illinois company Clarke.

Karen Larson, Clarke’s vice president of government affairs, told the Boston Globe that “when this was first brought to our attention, we conducted an internal inquiry of our manufacturing and supply chain to ensure that PFAS was not an ingredient in the production, manufacturing, or distribution of either the active or inactive ingredients of Anvil.”

PEER executive director Tim Whitehouse detailed the recent testing results in a letter sent last week to MADEP Commissioner Martin Suuberg that called for halting the use of Anvil 10+10, ensuring any replacement does not contain forever chemicals, and requiring pesticide companies to comprehensively test their products for PFAS:

This fall, PEER conducted several tests for PFAS of a 2.5 gallon jug of Anvil 10+10, the pesticide used in the aerial spraying programs of Massachusetts and many other states. Our tests revealed that Anvil 10+10 contains roughly 250 parts per trillion (ppt) of perfluorooctanoic acid (PFOA), and 260–500 ppt of hexafluoropropylene oxide dimer acid (HFPO-DA), a GenX replacement for PFOA. Both these results are hovering around the detection limits of the laboratory’s equipment, but there is no doubt that these PFAS are in the insecticide. While PFAS may be useful when added to pesticides as surfactants, dispersants, and anti-foaming agents, it is unclear whether the PFAS found in Anvil 10+10 is an ingredient added by the manufacturer, contained in one of the ingredients supplied to Anvil’s manufacturer by other companies, or whether it is a contaminant from the manufacturing/storage process. Moreover, since we were only able to test for 36 PFAS out of the 9,252 on the U.S. Environmental Protection Agency’s (EPA’s) inventory, it is impossible to know how many other PFAS might be in Anvil 10+10.
[…]
When PEER obtained its first positive PFAS results on Anvil 10+10, we immediately contacted DEP because of the far-reaching implications. MADEP independently tested nine samples of Anvil 10+10 from five different containers, and found eight different PFAS, including PFOA and PFOS. Some PFAS levels were over 700 ppt. As such, there appears to be no doubt that there are PFAS in the pesticide Massachusetts has chosen for mosquito control.

Whitehouse noted that Massachusetts aerially sprayed 2.2 million acres with Anvil 10+10 last year and more than 200,000 acres this year. The Boston Globe explained that “most of the spraying has been done in the southeastern part of the state, where EEE, a rare but deadly mosquito-borne disease, has been most prevalent.”

The EPA, which has been lambasted by lawmakers as well as environmental and public health advocates for its handling of PFAS contamination on a national scale, is working on “an analytical method” to detect the forever chemicals in pesticides and plans to conduct its own tests of Anvil 10+10, according to the newspaper.

“There are significant unanswered questions about the data currently available,” Dave Deegan, a spokesperson for the federal agency’s offices in New England, told the Boston Globe. “EPA will continue to work closely with and support the state on this issue. Aggressively addressing PFAS continues to be an important, active, and ongoing priority for EPA.”

Bennett and other critics of the EPA’s response to PFAS reiterated concerns about the agency in the wake of the revelations in Massachusetts.

“This PFAS fiasco shows that public trust in EPA having a full accounting of these materials and their safety is utterly misplaced,” said Bennett. “Until EPA acts, states need to adopt their own safeguards and chemical disclosure requirements because they certainly cannot depend upon the diligence of EPA.”

In a statement about the testing on Tuesday, Food & Water Watch executive director Wenonah Hauter declared that “these findings shock the conscience — states likely have unknowingly contaminated communities’ water with PFAS hidden in pesticides. Once again, the EPA has failed to protect the American people from harmful pollution.”

Emphasizing that “we need to stop the introduction of toxic forever chemicals into the environment and our water sources to protect public health,” Hauter said that “the EPA must ban all pesticides with PFAS components, designate PFAS as hazardous substances to hold polluters accountable for cleanup of contamination, and set strong enforceable standards for PFAS in our drinking water.”

“The GOP-controlled Senate must step up and pass the PFAS Action Act, which passed the House in January, to regulated these toxic compounds and hold polluters accountable, and Congress must pass he WATER Act to provide the financial relief to community water providers and households with wells to remove PFAS from drinking water or find alternative sources where treatment fails,” she added. “Now is the time for decisive action to protect people’s health and safety.”