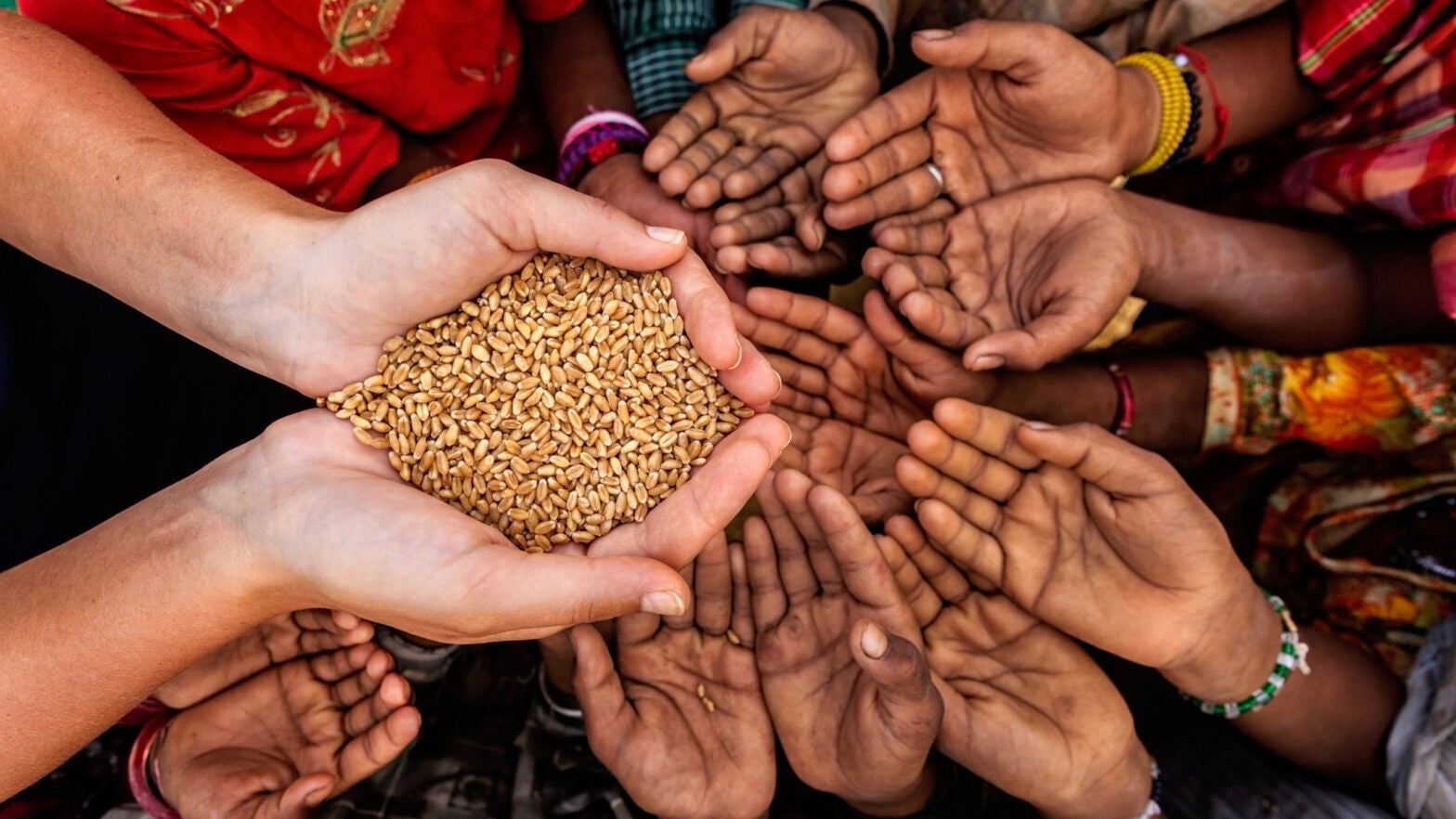 Food will be scarce, expensive and less nutritious,” CNN warns us in its coverage of the UN’s new “Climate Change and Land” report. The New York Times announces that “Climate Change Threatens the World’s Food Supply.”

Reading these headlines, I’m tossed back to the late ’60s when our culture was gripped by what I came to call the “scarcity scare,” as Paul Ehrlich’s The Population Bomb exploded into public consciousness spewing images of mounting hunger.

Really? Are our unstoppable numbers dooming us? I had to know.

Burrowing into the stacks of University of California Berkeley’s agriculture library, it hit me: In fact, the scarcity scare was a distraction, and a dangerous one — diverting us from a most obvious fact: Food was then, and is now, abundant. We humans actively create the experience of scarcity no matter how much food we grow.

Obsessed with a desire to share this discovery, in 1971 I wrote Diet for a Small Planet to expose and help transform our scarcity-creating food system.

Yet today, we seem not to have learned.

The world now produces more than enough food for each of us — 2,900 calories a day, roughly a third more than in 1961. And that’s just with the “leftovers” — with what remains after a third of the world’s cropland goes into feeding livestock, a practice that shrinks the calories available to us.

At the same time, 821 million people — almost as many as in 1979-1980 — lack sufficient calories. And, in recent years, even as record harvests generate “grain glut,” the number has been climbing.

This summer, the UN’s Food and Agriculture Organization revamped its hunger counts. To its “severe” food insecurity estimate of 821 million, it added a category “moderate food insecurity,” and it reported that 2 billion of us — one-quarter of humanity — are food insecure. We’re either lacking calories we need or we’re unsure about our continued access to enough; or we’re forced to reduce the quality and/or quantity we eat just to “get by.”

Intensifying the crisis is a related global trend: Calories and nutrition are parting ways as corporate, processed food floods the planet. Even two decades ago in rural India, I saw along the roadway whole groves of Eucalyptus trees whose trunks were painted with huge Pepsi ads.

One result of this disconnect between eating enough calories and getting the nutrients we need is that more than a fifth of young children worldwide experience stunted growth, a condition bringing life-long harms; and a third of us suffer from anemia, doubling the risk of maternal death and, in infants, associated with ongoing mental and psychomotor impairment.

That’s where a narrow focus on increasing food production, reinforced by the “scarcity scare,” has helped take us.

Now, nearly half a century since my own life-altering aha moment, the UN’s new Intergovernmental Panel on Climate Change (IPCC) report, “Climate Change and Land,” has triggered another frenzy of worry about our food supply.

Running over 1,500 pages, the report itself offers vital understanding of how the climate crisis threatens our food supply and quality; and, at the same time, how farming, eating and food waste contribute between 25 percent and 30 percent of total greenhouse gas emissions. (Livestock alone, I learned elsewhere, contribute 14.5 percent of such emissions globally.) The report also helpfully identifies ways that reworking our food system can become part of the solution to climate change.

You’d think I’d be thrilled that a key takeaway in this new report is that cutting back on grain-fed meat would trim greenhouse gas emissions as well as lessen pressure on our food supply. After all, wasn’t the latter the whole point of my book, Diet for a Small Planet?

In my first book I sought to awaken readers to the destructive and inefficient channeling of so much land and water into livestock.

Inefficient? Yes, very. As Americans, we imagine our farming as the best — the most modern and efficient. Yet, in large measure because of our meat-centered diets, as well as so much corn going to agrofuel, it feeds fewer people per acre than does Indian or Chinese agriculture.

Most important, I wanted my readers to see how the rules of our political and economic system were twisted to serve a minority, undermining food security.

So, for me, choosing a plant-and-planet-centered diet became an act of rebel reason. I’d reframed the hunger crisis: Its root is not scarcity of food but scarcity of democracy. And I wanted my daily choices to reject the illogic of our anti-democracy system.

On many levels, we still do not see this core truth.

The IPCC report, for example, lays out five scenarios, two of which could eliminate malnutrition by 2050. Among the necessary ingredients to get us there it mentions “high income and reduced inequalities, effective land-use regulation, less resource intensive consumption [i.e. less grain-fed animal food], including food produced in low-GHG emission systems and lower food waste.”

Together, taking such steps constitute an about-face on multiple fronts — one that’s conceivable only in a democracy where public policies serve what our constitution’s preamble calls the “general welfare.” By democracy I mean both the small “d” variety that includes community and worker empowerment; and I mean the formal, capital “D” variety, i.e., government accountable to citizens.

First, consider the “small d” variety and climate solutions. Perhaps the most dramatic success story for me — and missing in the IPCC report — is the work of poor but empowered farmers cooperating to transform their lives and confront climate change in Niger, the world’s poorest country, which is mostly desert.

Niger’s progress — led by small farmers together making and enforcing rules — has been celebrated as perhaps the largest regreening transformation in all of Africa. Now, many other nations are interested in adapting the approach; and related farming breakthroughs are arising in India and elsewhere.

And, now to capital “D” democracy essential for governments to face the climate emergency and end needless hunger.

Democratic government is under attack in much of the world, and here in the U.S. to a degree unprecedented in my lifetime. But something else feels new: a growing citizens’ Democracy Movement focusing on remaking the anti-democratic rules and norms that brought our nation to climate-denier status and even wider dysfunction.

In Daring Democracy, Adam Eichen and I share stories of this movement that has changed our lives and is achieving vital breakthroughs, sadly missing from the headlines. In the 2018 midterm elections alone, many who’d never been politically engaged helped pass key democracy reforms in nine states, eight cities and one county — ranging from those addressing gerrymandering to protecting voting rights. For me, the future of our precious Earth depends on more and more of us jumping in to achieve such system-correctives to what can accurately be called “privately held government.”

But, now to my “yes” — to why I’m psyched that the IPCC report emphasizes choosing plant-and-planet-centered diets and how my democracy obsession relates to what I put into my mouth.

Consciously eating what is good for my body, for others, and for our planet is a choice that changes me — daily. It keeps me in a relational world, reminding me that the only choice I don’t have is whether to change the world. I know that every act and inaction send out ripples. Someone is always watching.

I often think of it this way: Making positive daily choices based in consciousness of connection doesn’t “change the world,” but the process changes me. I become more convincing to myself, so maybe I become more convincing to others: a stronger agent in the collective struggle to change the world. Just this morning, a stranger approached me to tell me that my first book had started her on a “new path.” Who knows, but I can hope her experience has been similar to mine.

I want a world where we all can experience such power. And in working for a fairer, inclusive democracy, we are enabling more and more of us to have this satisfaction: that of making choices that are both good for us and the planet.

So, yes, I’m psyched that the IPCC report includes plant-and-planet-centered diets as part of the solution, and we need not let fear trap us into another regressive scarcity scare that obscures the roots of the crisis in anti-democratic economic and political rules.

Instead, we can work to ensure that personal choices we can make to align with nature fortify our determination to dig still deeper, aware that fighting for real democracy is fighting for tackling climate change and the end of hunger.

This story originally appeared in Truthout. It is republished here as part of EcoWatch’s partnership with Covering Climate Now, a global collaboration of more than 250 news outlets to strengthen coverage of the climate story.