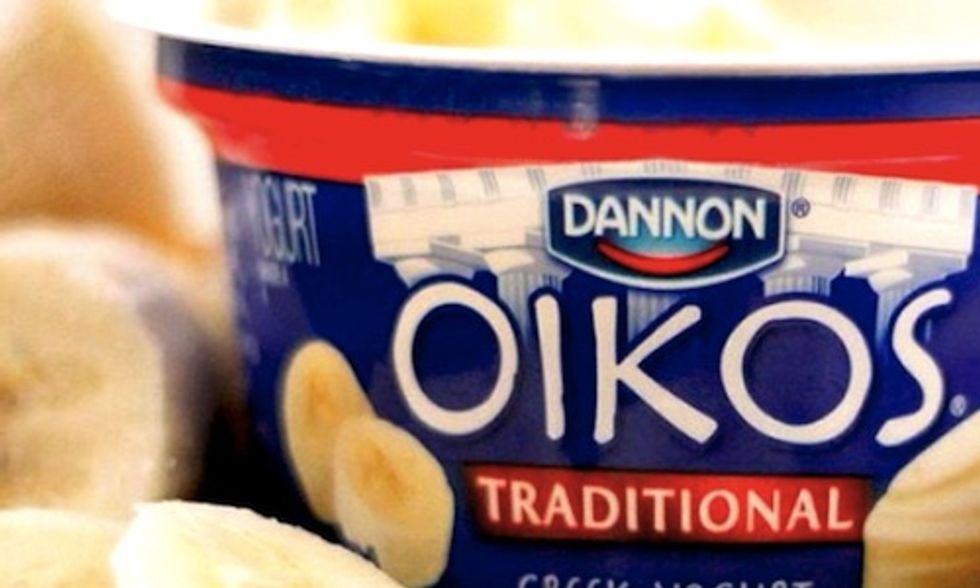 Two more major food companies, Dannon and Hershey Co., are making big changes to their ingredients in products sold nationwide as the July 1 deadline for Vermont’s law—which requires the labeling of genetically modified (GMO) food products sold in the state—approaches.

The nation's leading yogurt maker announced today that its three flagship brands, Dannon, Oikos and Danimals, will move to more natural ingredients that are not synthetic and non-GMO. These brands represent 50 percent of the company’s current volume.

Additionally, for these three brands, the feed of its farmers’ cows will be non-GMO, as per the company announcement:

For the company’s foundation ingredient—milk—Dannon is going one big step further. Starting in 2017 and completing the transformation by the end of 2018, Dannon will work with its farmer partners to ensure that the cows that supply Dannon’s milk for these flagship products will be fed non-GMO feed, a first for a leading non-organic yogurt maker.

The New York Times reported that Dannon will set up a direct pipeline to some farms that supply the company with milk as well as a new supply system in which farmers in the program must follow Dannon-dictated animal welfare standards and work to improve and conserve soil on their farms.

Thanks @NYTimes for recognition of what we've done and what’s to come on sustainable agriculture & more here @Dannon https://t.co/x0XyiQRR9a
— The Dannon Company (@The Dannon Company) 1461723554.0

“For the last many decades, we’ve had a system that encourages short-term efficiencies at the expense of soil health, animal welfare and biodiversity,” Lozano continued. “We want to play a part in changing that system.”

The White Plains, New York-based company, which sells more than 200 different flavors, styles and sizes of cultured refrigerated and frozen dairy products, has pledged to "evolve the remaining brands over time."

Dannon said its overall aim is to "increase transparency" in its products and "evolve to more natural and fewer ingredients for flagship brands."

Dannon has also committed to labeling all its products that contain GMO ingredients by December 2017 as it favors a nationwide labeling system.

Similarly, Hershey CEO Hershey CEO J.P. Bilbrey said in a Tuesday conference call that the chocolate-maker will also make changes to their products to comply with Vermont's label law.

"We will abide by what's happening in Vermont and label as appropriate," Reuters quoted him saying.

He added that he hopes "at federal level there is clarity brought to this [GMO labeling] question because it becomes an interstate commerce issue."

Bilbrey also said that his company's sales in the most recent quarter declined 4.3 percent in North America, specifically pointing out that consumers are starting to prefer healthier ingredients and transparency, Fortune reported. Polls show that the vast majority of Americans, 89 percent, want the federal government to require labels on genetically engineered food.

“Since its launch in 2013, barkTHINS has quickly become a favorite snack brand, due to its commitment to using simple ingredients, fair trade cocoa and non-GMO certification,” Bilbrey said. “barkTHINS is a very attractive and uniquely crafted brand that essentially created the chocolate thins category, a new form of chocolate stacking.”

Dannon and Hershey are following in the footsteps of other food giants. In recent months companies such as Campbell Soup, General Mills, Kellogg, Mars, ConAgra and Frito-Lay have voluntarily decided to disclose if their products contain GMOs. Following Vermont, many other states are also considering their own GMO label laws.

For such a tiny state, little Vermont's looming labeling mandate has sparked major controversy. EcoWatch reported previously that powerful food and beverage trade organizations have heavily lobbied and spent eye-popping sums to fight state-by-state labeling mandates to prevent a patchwork of different state labeling laws. Food organizations also argue that labeling specifically for GMOs will be costly to the consumer.

Big Food, however, was dealt a huge blow this past March when the Senate rejected Sen. Pat Roberts’ (R-Kan.) Safe and Accurate Food Labeling Act (SAFE). The bill, dubbed by opponents as the Denying Americans the Right to Know Act or DARK Act, would have prevented states—namely Vermont—from requiring labeling of GMOs and stopped pending state laws that require labeling to go into effect.

Feeling Hopeless About the Climate? Try This 30-Day Action Plan