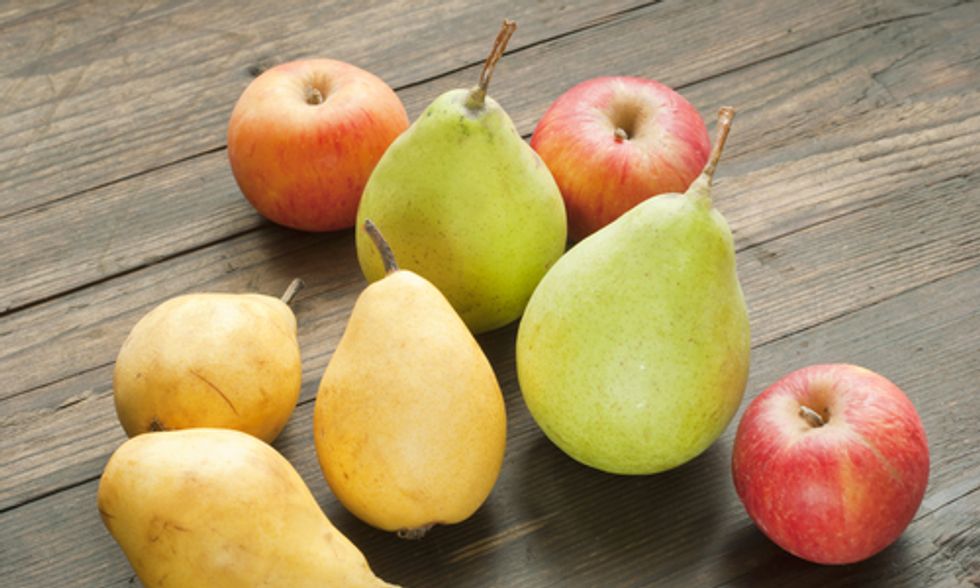 Recently, the Organic Consumers Association (OCA) disrupted the National Organic Standards Board (NOSB) meeting to protest a move by the U.S. Department of Agriculture’s (USDA) National Organic Program (NOP) that makes it more difficult for the NOSB to phase out synthetic and non-organic materials from organic food.

U.S. growers exporting to the European Union comply with the EU rule that says apples and pears must be produced without antibiotics to be sold as organic. Photo courtesy of Shutterstock

Who was behind the latest move to weaken organic standards? Big Food, from the looks of it.

We weren’t able (yet) to overturn the NOP’s decision to change its “sunset” policy. But thanks to the help of our million-plus network, and some of our pro-organic allies, we did persuade the NOSB to enforce its Oct. 21 deadline for ending the use of streptomycin on organic apples and pears.

How did synthetics get into organic in the first place?

OCA has long opposed the use of synthetics in organic. When the organic rules were first placed on the books in 2002, with allowances for certain synthetics, we argued that allowing synthetic ingredients in products labeled with the “USDA Organic” seal violated the organic law, the Organic Foods Production Act.

We joined a lawsuit brought by Arthur Harvey, a Maine organic blueberry farmer and National Organic Program inspector—and won! The court agreed that the organic law did not allow synthetic substances in products certified as organic.

The big companies running the Organic Trade Association (OTA) weren’t happy with our victory, so they went to Congress to weaken the organic law. In 2005, OTA successfully lobbied for a rider to the 2006 Agriculture Appropriations bill to keep synthetics in organic.

Before the 2005 amendments, the organic law provided for a National List of non-organic ingredients allowed in organic, but said:

The National List may provide for the use of substances in an organic farming or handling operation that are otherwise prohibited under this title only if . . . (B) the substance (iii) is used in handling and is non-synthetic but is not organically produced.

The OTA amendments in 2005 changed the organic law so that it prohibits only the addition of "any synthetic ingredient not appearing on the National List during processing or any post-harvest handling of the product."

We said it then, and believe it still: The OTA’s amendments represented nothing more than a “sneak attack engineered by the likes of Kraft, Dean Foods and Smucker's."

OCA wasn’t alone in its opposition to the 2005 changes. According to an open letter protesting OTA’s action signed by 200 organizations and individuals in the organic community, including many disgruntled members of the OTA:

At the time, the New York Times reported that Abigail Blunt, one of the lobbyists for Altria, Krafts’ majority owner at the time, confirmed that she had worked on the issue.

Other OTA members, including Dean Foods' subsidiary Horizon Organic and the J. M. Smucker Company, the owner of Knudsen and Santa Cruz Organic juices, said they supported the OTA’s amendment, though they didn’t independently lobby for it.

The OTA’s 2005 coup triggered a low point in consumer confidence in organic. But the OCA continued to support USDA Organic certification as the highest food standard for two reasons. 1) We trusted the NOSB to carefully vet each synthetic allowed in organic, and 2) We were promised the that each synthetic would “sunset” after five years.

That brings us to the lowest point in consumer confidence in organic since 2005: NOP Director Miles McEvoy’s 2013 change to the sunset process. That action, which has made it extremely difficult for the NOSB to remove synthetic and non-organic products from the National List of synthetics and non-organic materials allowed in organic, is why we protested the NOP at the NOSB meeting in San Antonio.

Once again, OCA was not alone in its opposition to the new change in the NOP’s sunset policy. Sen. Patrick Leahy (D-VT) and Rep. Peter DeFazio (D-OR), both of whom were principal authors of the Organic Foods Production Act of 1990, wrote to USDA Secretary of Agriculture, Tom Vilsack, to voice their disapproval of the NOP’s latest power grab. So did former NOSB chairs Jim Riddle, Jeff Moyer and Barry Flamm, who wrote that the recent changes “unilaterally enacted by the USDA's National Organic Program . . . significantly erode the authority, independence and input of the NOSB.”

What’s behind McEvoy’s latest move? Is this another “sneak attack engineered by the likes of Kraft, Dean Foods and Smucker’s”?

Looks like it. Kraft’s, Dean Foods’ and Smucker’s fingerprints are all over this.

McEvoy’s boss at the USDA is Agricultural Marketing Service Administrator Anne L. Alonzo. Prior to joining the USDA in May 2013, Alonzo served as vice president, global public policy, corporate affairs, at Kraft Foods.

Dean Foods has undergone some corporate reshuffling. Gregg Engles, CEO of Dean Foods during the OTA’s 2005 coup, is now the CEO of WhiteWave Foods. WhiteWave had been a subsidiary of Dean. (Dean’s purchase of WhiteWave, maker of Silk soymilk, resulted in a downgrade of its products from certified organic to the meaningless “natural” label.)

Today, WhiteWave is a conglomerate of Silk, Earthbound Farm (the nation’s largest producer of organic produce) and Horizon Organic Dairy (the largest organic brand). The OTA Board has two WhiteWave representatives, Kelly Shea and Samantha Cabaluna. WhiteWave is represented on the NOSB by John Foster, who openly supports McEvoy’s change to the sunset process.

Smucker’s lowered its profile after a 2011 Organic Spies exposé revealed that Smucker’s VP Julia Sabin, who was then president of the OTA Board, personally profited from Smucker’s sales of genetically engineered foods and that Tim and Jenny Smucker were donors to the Grocery Manufacturers Association PAC. Sabin is no longer on the OTA Board, but Smucker’s continues to participate in OTA lobbying.

Streptomycin voted out of organic

The most important vote for consumers at the meeting was the vote on streptomycin, the only remaining exception to the prohibition on the use of antibiotics in organic. At a past meeting, under the old sunset process, the NOSB voted to remove streptomycin from the National List as of October 2014.

Organic apple and pear growers petitioned the NOSB to extend the deadline. The petition needed a two-thirds majority of the NOSB (10 votes) to prevail.

Growers argued that they need the drug to treat fire blight, a bacterial disease that kills the shoots of trees, giving them the appearance of having been scorched by fire.

But there are other ways to control fire blight, that don’t involve the use of antibiotics. In fact, U.S. growers exporting to the European Union comply with the EU rule that says apples and pears must be produced without antibiotics to be sold as organic. Dozens of E.U.-compliant Pacific Northwest organic orchardists have successfully used a systems approach to non-antibiotic fire blight control. Additionally, there are some apple and pear varieties that are naturally resistant to fire blight.

OCA submitted a total of 74,845 petition signatures and unique comments from organic consumers asking the NOSB to vote to remove streptomycin from the National List of synthetics allowed in organic.

The NOSB has been officially in favor of a phase-out of streptomycin use on organic apples and pears since 1995. Yet each time the industry has asked for an extension of the rule that allows them to use it, the NOSB has capitulated.

Until now. The industry didn’t get the 10 votes it needed to continue using streptomycin past October 2014. USDA Organic is now 100-percent antibiotic-free!

Alexis Baden-Mayer is political director of the Organic Consumers Association.

Ronnie Cummins is national director of the Organic Consumers Association.