'Most Endangered' River in the Nation 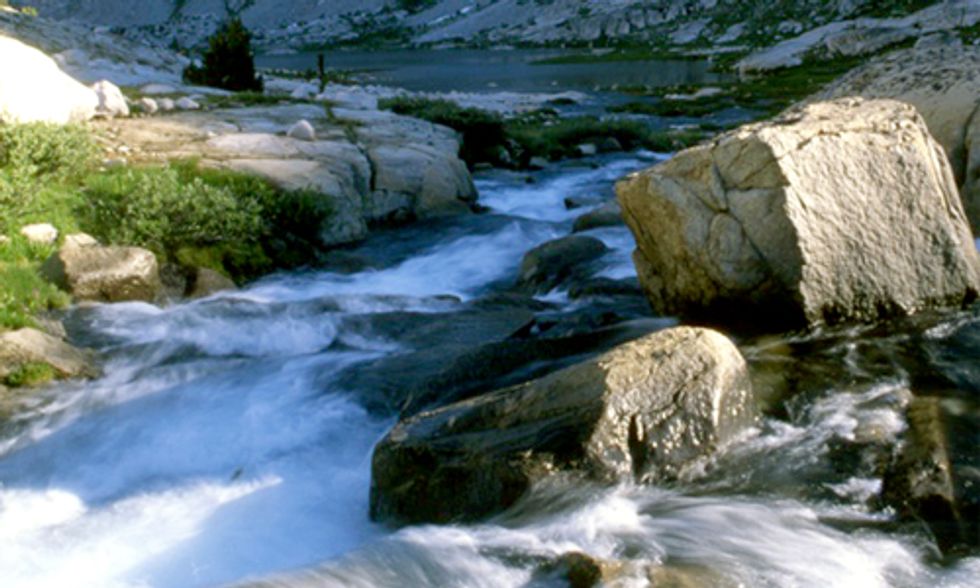 The organization American Rivers has distinguished the San Joaquin River of California with the dubious title of "most endangered" river in the nation. Since 2009 the stream has been celebrated as a path-breaking example of restoration—status that could now be threatened.

The San Joaquin can claim to be the hardest working river in America; not only did diversions completely dry up a 63-mile middle reach for fifty years, but then the lower river's polluted return-flows are pumped back upstream to be used yet again. Photo credit: Tim Palmer

This artery of California's Central Valley and important supplier of water to southern California begins in high Sierra wonderlands south of Yosemite National Park and in the breathtaking Evolution Valley of Kings Canyon National Park. Below the stunning park-protected headwaters and wilderness areas, the river and its tributaries are dammed 30 times. The San Joaquin is repeatedly impounded for hydropower as it plunges toward grassy foothills, diverted for irrigation in the Central Valley, finally ending in the Delta as a conduit of agricultural runoff and the second-longest river system in California.

The San Joaquin can claim to be the hardest working river in America; not only did diversions completely dry up a 63-mile middle reach for fifty years, but then the lower river's polluted return-flows are pumped back upstream to be used yet again. The Water Education Foundation called this the "most impaired major river in the state." A legendary migration of half a million salmon—nourishing Indians, sport anglers, wildlife and a robust commercial fishery at sea—was reduced from one of the most prolific anadromous runs in America to virtually nothing. But in 1988, the river's prospects began to change.

When the federal Bureau of Reclamation acted to extend the San Joaquin's overdrawn plight by rubber-stamping another 40-year extension of irrigation supply contracts, the Natural Resources Defense Council and other conservation groups appealed, and prevailed in court. With hard-earned consensus of all major parties in 2006, a legal agreement set new rules, contracts and appropriations to serve irrigation needs but also to re-nourish nominal flows in the desiccated reaches, to upgrade water quality, and to restore self-sustaining runs of salmon. With great fanfare, initial flows freshening the San Joaquin's long-parched mid-section bubbled northward in 2009. Salmon—eager to return home for spawning even after the species' half-century of absence—migrated upriver once again in 2012 and 2013. Restoration flows were recaptured downstream for farmers. Fishing derbies, salmon festivals and summer camps sprang to life in communities along the way as the newly formulated San Joaquin gained stature as America's preeminent river to be reborn.

American Rivers has distinguished the San Joaquin River of California with the dubious title of "most endangered" river in the nation. Photo credit: Tim Palmer

A panic-stricken response to the drought could put these gains in jeopardy. Earlier this year a bill passed the House of Representatives to undercut the San Joaquin's negotiated settlement of two decades in the making. The Senate will not likely approve this edict, but the future of the restored lifeline remains vulnerable and depends on continuing support for the fish and wildlife gains of recent years.

Architects of the restoration accord anticipated the stress of this year's drought, and specified that flows would not be released to the dewatered section in years of lowest runoff, such as 2014. Restoration biologists have trapped the progeny of 360 adult salmon that made it up the river to spawn this year and trucked them around the dried-up reach—a backup plan recognizing that compromises are necessary. Even this year, at the height of California's worst drought, the restoration program is working. People from all sides have negotiated a truce that's effective and promising.

If there's hope that a nugget of California's original wealth can be restored while sustaining modern day demands, that hope lies along the San Joaquin. The restoration started here is a promising historic achievement with a legacy that belongs to everyone. It should not be sacrificed to the cynical belief that a river is wasted if it serves some small remnant of native life, which once thrived to the benefit of all.

Tim Palmer is the author of Rivers of California as well as Field Guide to California Rivers, California Glaciers, and other books.