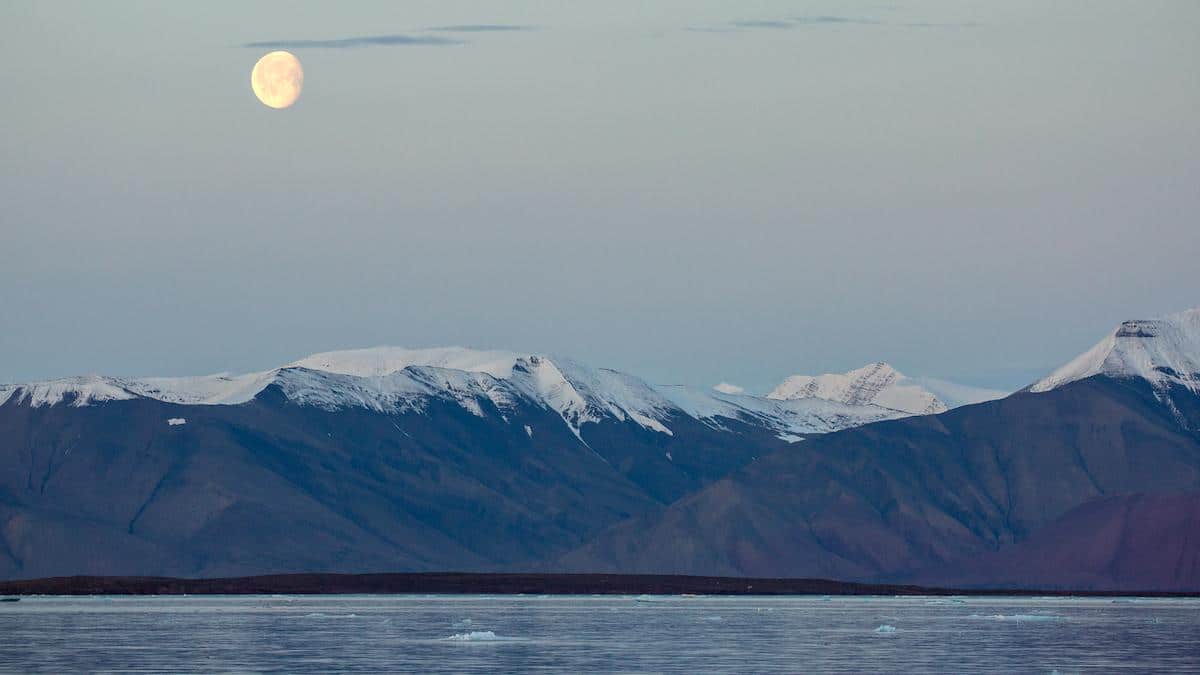 The moon over the Svalbard Islands, Norway, and the Arctic Ocean, where a study has linked tidal rhythms to methane release. MB Photography / Moment / Getty Images

The moon helps to control the release of methane from the Arctic Ocean.

That’s the takeaway from a study published in Nature Communications in October, which found that the tidal rhythms played a role in the intensity and frequency of methane releases from sediments in the Arctic Ocean. Lower tides meant more intense releases, while higher tides reduced the height and volume of gas releases.

“It is the first time that this observation has been made in the Arctic Ocean,” study coauthor and researcher at the Centre for Arctic Gas Hydrate, Environment and Climate (CAGE) at the UiT-The Arctic University of Norway Jochen Knies said in a CAGE press release. “It means that slight pressure changes can release significant amounts of methane. This is a game-changer and the highest impact of the study.”

Methane release from natural sources is tricky to quantify and constrain, especially in the Arctic Ocean. It turns out that even the moon has a say in the matter. #climatechange #greenhousegas 🌜https://t.co/lATOjGe0f0

To achieve their results, the researchers put a device called a piezometer in Arctic Ocean sediment about a meter (approximately 3.28 feet) from the seafloor and left it there for four days. The piezometer measured the pressure and temperature of sediment pores every hour and revealed that the upward and downward movement of gas is linked to pressure, which is in turn determined by the tides.

The findings have two major implications.

The first concerns the amount of methane the Arctic Ocean may be releasing into the atmosphere. Methane is an extremely potent greenhouse gas. Once released into the atmosphere, it has 86 times the warming potential of carbon dioxide before it decays to the latter after one or two decades, Scientific American pointed out. It is currently generated by human activities like fossil fuel production and transportation, livestock agriculture and the decay of organic material in landfills, according to the U.S. Environmental Protection Agency (EPA). But there is also concern that, as the planet warms, it could be released by the thawing of frozen gas deposits in the Arctic Ocean known as hydrates. Preliminary data released by Arctic scientists in October revealed wide methane release off the Eastern Siberian coast, though other scientists urged caution as the findings have not yet been peer reviewed.

“This tells us that gas release from the seafloor is more widespread than we can see using traditional sonar surveys. We saw no bubbles or columns of gas in the water. Gas burps that have a periodicity of several hours won’t be identified unless there is a permanent monitoring tool in place, such as the piezometer,” Plaza Faverola said in the CAGE release.

Knies noted that the methane releases his team studied occured in the deep ocean, where they are less likely to reach the atmosphere and contribute to the climate crisis. But Knies suggested the study should be repeated studying shallower sediments.

“What we found was unexpected and the implications are big,” Knies said in the release.

The second implication has to do with how global warming will interact with sea level rise to influence Arctic Ocean methane release. While higher temperatures mean greater thawing, the fact that greater water pressure reduces the height and volume of gas releases may mean that sea level rise partly counterbalances the impact of warming.

“Earth systems are interconnected in ways that we are still deciphering, and our study reveals one of such interconnections in the Arctic: The moon causes tidal forces, the tides generate pressure changes, and bottom currents that in turn shape the seafloor and impact submarine methane emissions. Fascinating!” Plaza Faverola said in conclusion.