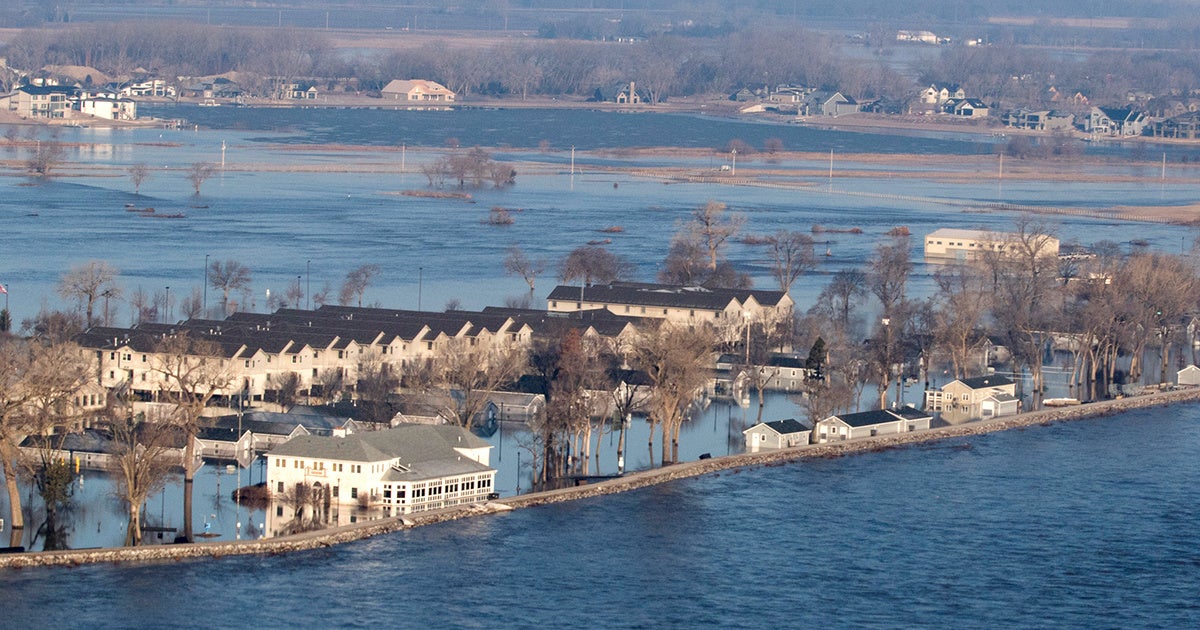 An aerial view of the flooding at the Camp Ashland, Nebraska on March 17. Nebraska National Guard / Staff Sgt. Herschel Talley / Flickr / CC BY 2.0

The record flooding in the Midwest that has now been blamed for four deaths could also have lasting consequences for the region’s many farmers.

Flooding has swamped fields and stockpiles and drowned or harmed livestock in Iowa, Nebraska, South Dakota and other states. In Nebraska alone, the loss of crops and livestock is estimated to total nearly $1 billion, Reuters reported Tuesday.

“The economy in agriculture is not very good right now. It will end some of these folks farming, family legacies, family farms,” Iowa farmer Farmer Jeff Jorgenson told The Associated Press. “There will be farmers that will be dealing with so much of a negative they won’t be able to tolerate it.”

One of those farmers might be Anthony Ruzicka of Verdigre, Nebraska. His family has been farming the same plot for five generations, since the 1800s. But the floods have destroyed their farmhouse, littered their alfalfa and corn fields with chunks of ice and killed at least 15 of their cattle.

“There’s not many farms left like this, and it’s probably over for us too, now,” Ruzicka The New York Times. “Financially, how do you recover from something like this?”

Not only crops were lost. The floods have damaged roads, bridges and railways farmers rely on to move their products to processing plants and shipping centers, Reuters reported. Such a major blow to U.S. farmers is likely to have national consequences.

“This will impact the food on your table,” Chair of Nebraska’s Democratic Party Jane Fleming Kleeb tweeted, as The New Food Economy reported.

Nebraska families facing historic losses, this will impact food on your table
-Over $1billion in 🌽 🐄🐖🐔losses, will ⬆️
-Farmers already had a 20% increase in bankruptcies, will ⬆️
-64 counties declared emergencies
-79,000 miles of waterways in Nebraska, more 🌧️ on the way pic.twitter.com/cRJfuLk2bW

The floods come at a bad time for farmers for a variety of reasons. Seasonally, the floods have come just as farmers usually start their spring planting and need dry weather in order to get seeds in the ground.

At the same time, farmers in the region are generally suffering. The number of farms that filed for bankruptcy last year rose by 19 percent, the highest level in more than ten years. Further, incomes from farming have fallen by more than 50 percent because of a global glut of grain, Reuters reported. To make matters worse, a trade war with China has meant the country has stopped importing U.S. soybeans. Many farmers had stored last years’ crops of grain and soy in hopes of better prices, and now some of those stores have been destroyed.

“I’ve never seen anything like this in my life,” Winslow, Nebraska farmer Tom Geisler, who lost two storage bins full of corn, told Reuters. “We had been depending on the income from our livestock, but now all of our feed is gone, so that is going to be even more difficult. We haven’t been making any money from our grain farming because of trade issues and low prices.”

Human lives weren’t the only ones impacted by the floods. U.S. Agriculture Secretary Sonny Perdue told reporters that the governors of Nebraska and Iowa had told him that up to one million calves may have been killed, Reuters reported in another article. Hog farms in Iowa were also flooded, according to The Associated Press.

Pets have also been caught up in the flooding. Rescue Lieutenant Jami Mitchell of Waterloo Fire/Rescue told Reuters that the number of animals rescued from homes in Waterloo, Nebraska included 87 dogs, eight cats, one rabbit, two birds, two hamsters and 26 horses.

But even animals who survived may have health problems because of the ordeal.

“Standing in the cold water and being cold certainly isn’t good for the health of the animal,” Nebraska Cattlemen spokeswoman Talia Goes told Reuters.