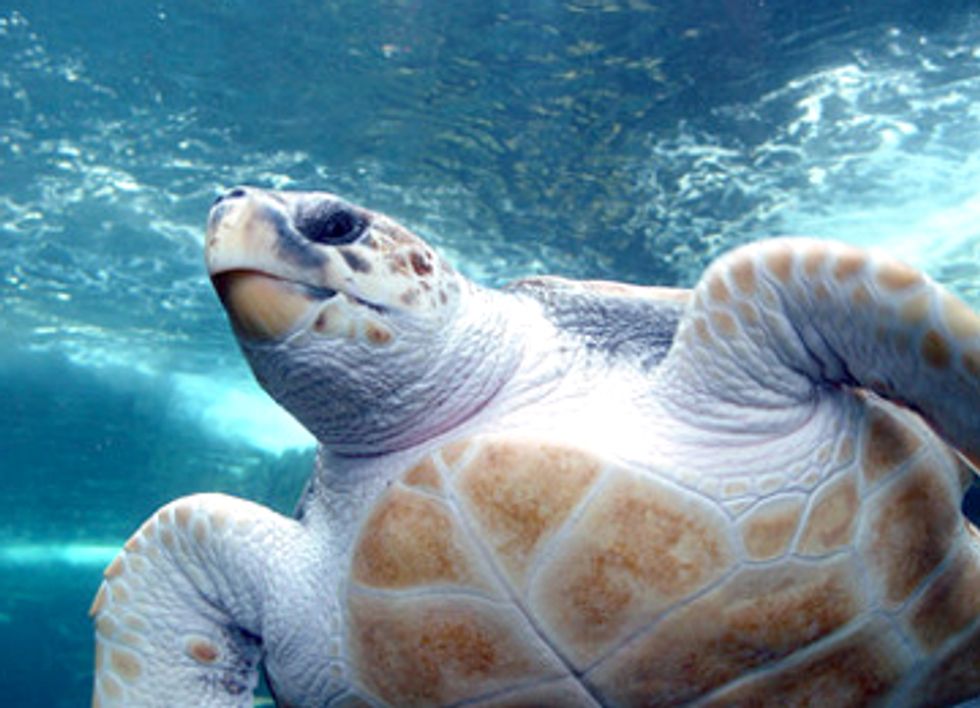 Mexico faces the threat of a trade embargo from the U.S. for failing to protect endangered North Pacific loggerhead sea turtles from getting entangled in fishing gear off the Baja California’s Gulf of Ulloa. Last week state government officials in Mexico reported that 705 loggerheads have stranded dead along a 30-mile shoreline so far this year, most during the summer fishing season, including 30 dead turtles in a single day. That’s more turtles than normally wash ashore annually along the U.S. coast from Texas to the Carolinas. Long-term scientific studies show that the leading cause of these deaths is preventable drowning in fishing gear; yet Mexican officials have claimed that only one percent of the reported turtle deaths were caused by bycatch.

“Loggerhead sea turtles are dying by the thousands along the Mexico coast,” said Sarah Uhlemann, senior attorney at the Center for Biological Diversity. “The United States can ban the import of fish and other wildlife products from nations that fail to protect imperiled species, and this is a clear case where such strong action is necessary.”

The Pelly Amendment gives the U.S. the authority to embargo fish and other wildlife products from countries that violate wildlife-protection treaties, including the Inter-American Convention for the Protection and Conservation of Sea Turtles. A separate law, the Magnuson-Stevens Act, authorizes sanctions against countries that allow excessive bycatch of U.S.-protected species, like loggerhead sea turtles.

Loggerhead mortality rates in the Gulf of Ulloa, as reported by the Mexican government as well as numerous scientific studies over the past decade, are among the highest documented in the world.

“Based on two decades of collaborative research we concluded that the main cause of these deaths is bycatch in fishing nets,” said Wallace 'J.' Nichols, Ph.D., a research associate at the California Academy of Sciences. “Even the Mexican government’s own scientists have pointed to bycatch.”

The Secretariat of the Environment and Natural Resources, the Mexican National Commission for Protected Areas, and the Mexican National Institute of Fisheries, all Mexican government agencies, have acknowledged research that identifies bycatch as the main cause. Studies conducted at the Gulf of Ulloa, backed by research in the U.S., show that turtles washed ashore represent a small fraction of the thousands killed.

“The Mexican government has ignored their own science and misrepresented the cause of turtle deaths in an attempt to appease the fishing industry and mislead the U.S. government,” said Juan Carlos Cantu, program director of Defenders of Wildlife Mexico. “In the announcement of the latest loggerhead mortality figures they claimed that a survey of the carcasses showed that only one percent of deaths were caused by bycatch. When turtles drown in gillnets, however, there is almost never any physical proof that can be gathered short of performing an autopsy.”

The Mexican state government put forth the purportedly low bycatch rate without performing the procedures necessary to support its claim.

“Proven sustainable fishing solutions can solve the high loggerhead mortality rate, but Mexico has shown an insufficient willingness to act,” said Alejandro Olivera of the Baja California Sur-based Mexican Center for Environmental Rights (CEMDA). “It is in their interest to do so before this becomes an international crisis. It would be tragic for this situation to lead to an embargo when we have world-class science and viable solutions available.”