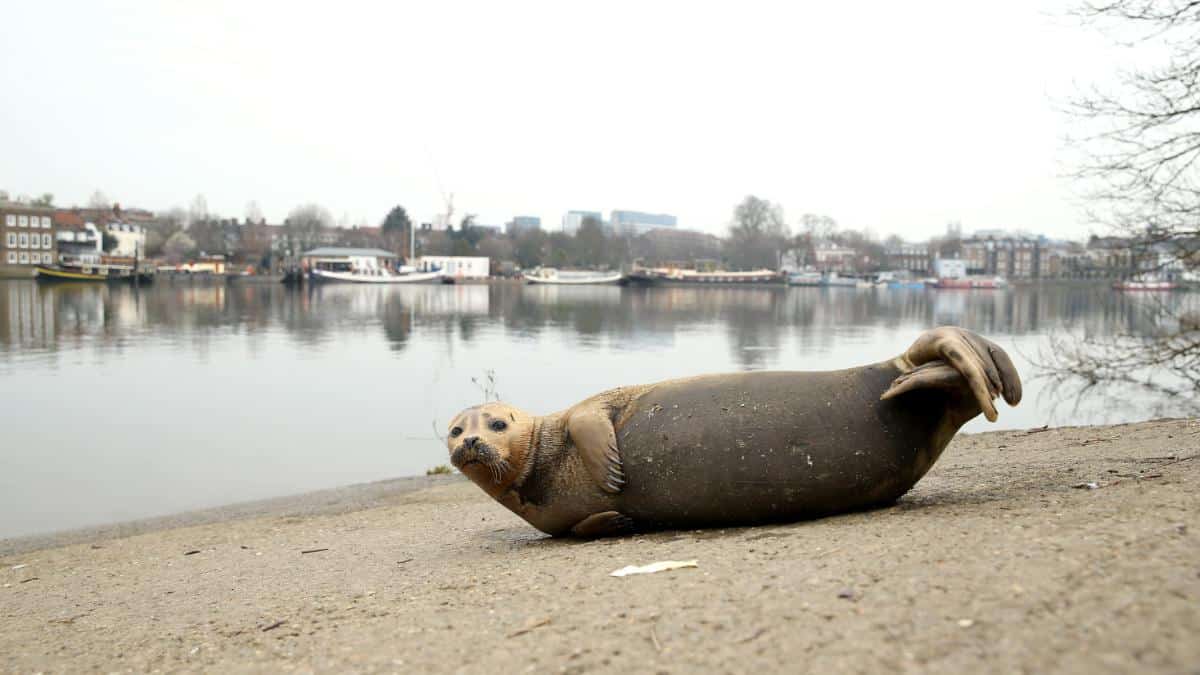 This 10-month-old harbor seal had to be put down after being attacked by a dog, despite signs warning people to maintain their distance. Chris Jackson / Getty Images

A seal that had won the hearts of West London had to be put to sleep after a dog attack Sunday.

The 10-month-old harbor seal, nicknamed Freddie Mercury, was taken to the South Essex Wildlife Hospital, where staff discovered he had a fractured flipper and dislocated joint, the hospital wrote on Facebook. They also said he was not eating and had a spreading infection.

“At this stage we believe the only ethical and fair option we have is to end his suffering,” the hospital wrote.

Freddie first gained public fame in February after being rescued from the Teddington Lock in Southwest London, where he got a fishing lure stuck in his mouth, The Guardian reported. He was released on the Isle of Sheppey off the Kent coast, but returned to the Teddington stretch of the Thames to Londoners’ delight.

‘We are so lucky to have these beautiful animals in our river, it’s magical,” Broni Lloyd-Edwards, a photographer whose images of Freddie appeared in Metro, told the paper.

However, a dog mauled Freddie as he basked along the riverside on Sunday, The Guardian reported. Four people rushed to pry open the dog’s jaws, including a vet. The dog and its owner then left, while emergency workers from the British Divers Marine Life Rescue (BDMLR) rushed the seal to the hospital.

“Freddie was a wild seal and after the ferocious attack on Sunday he suffered a serious broken and dislocated flipper,” BDMLR CEO Alan Knight wrote on Facebook. “We contacted one of the UK’s leading orthopedic surgeons, and he said that unfortunately the only option was to euthanize the seal.”

Both the hospital and BDMLR said the incident underscored the importance of giving wildlife the space they need.

“Sadly, Freddie is not the only seal we have had to care for that this has happened to,” the hospital wrote. “Please folks do not go near seals and always, always, keep dogs on leads and under control.”

“We are all absolutely gutted to hear about the extent of the injuries Freddie suffered, and highlights yet again the serious problems that can arise when humans and dogs encounter wild animals,” the group wrote. “We hope that his story will go a long way to helping educate people to look up and follow the appropriate guidelines for how to behave respectfully around wild animals and not cause disturbance or worse to them.”

This could be life-saving advice for the harbor seals that frequent the Thames. The Zoological Society of London’s Thames Marine Mammal Survey has so far reported 117 seal sightings along the river this year, the Evening Standard reported.

“It is not unusual for seals to find their way into harbors or rivers such as the Thames and they have been known to travel inland quite some distance,” a spokesperson for the Royal Society for the Prevention of Cruelty to Animals told Metro. “They are often just looking for more food and generally they find their way out to sea again.”