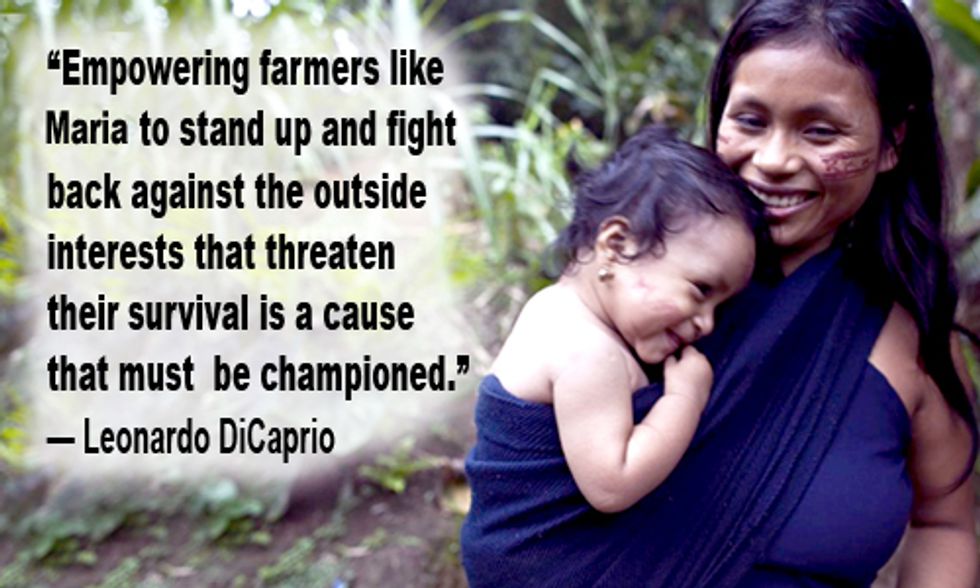 Leonardo DiCaprio announced that he is investing in the fast-growing beverage startup Runa, which works with Ecuadorian farmers to manufacture sustainably produced organic teas and natural energy drinks made from the guayusa plant found in the Amazon.

But DiCaprio isn't just financially backing the brand, the Oscar-winning actor and environmental activist will donate all of his shares back to the guayusa farmers, meaning they will be direct shareholders.

Leonardo DiCaprio on Instagram: “Proud to invest in & join @DrinkRuna in supporting indigenous people of the Amazon whose futures are at risk as their native lands are…”

“I am so proud to join with Runa in supporting the indigenous people of the Amazon,” DiCaprio said. “The future of these communities, and many like them across the world, are at risk as their native lands are exploited for natural resource and agricultural development. Sustainable farming practices are key to helping ensure a brighter future for so many local people.

“We must all do everything we can to help indigenous and local people who too often suffer the worst environmental degradation, and are most at risk from climate change. Empowering them to stand up and fight back against the outside interests that threaten their survival is a cause that must be championed.”

Runa, founded in 2009 by college graduates Tyler Gage and Dan MacCombie, buys guayusa leaves from 3,000 indigenous farming families in Ecuador. The guayusa leaves, which have been consumed as a tea by the native Kichwa communities for thousands of years, are processed in a plant in Ecuador and then shipped to the U.S.

"At Runa, we’re asking ourselves a basic economic question: How do we create new value for these traditions, people and the rainforest?" Gage, who lived in the Ecuadorian rainforest for two years to build a guayusa supply chain, told Fast Company.

"Local governments are not placing value on Amazonian knowledge and cultures; they are deforesting the land to grow palm oil," Gage added. "I wanted to prove that we can manage land more profitably using sustainable farming practices and direct trade relationships with products like guayusa."

Runa's products, which can be found in thousands of stores across the U.S. including Whole Foods Market and Safeway, are also certified non-GMO and Fair Trade.

According to Inc., Runa has "grown its revenue by more than 2,000 percent since 2011, and bringing in nearly $5 million in sales in 2014. This year, the company expects to more than double that figure."

DiCaprio will also be joining Runa's advisory board, which includes Yolanda Kakabadse, the president of the World Wildlife Fund, and Ann Veneman, the former U.S. Secretary of Agriculture and director of UNICEF.

DiCaprio invested an undisclosed sum in Runa. The noted planetary steward has already put his wealth and resources in a number of environmentally and socially conscious organizations and businesses, including Blue Planet, a prominent developer of carbon capture technology based in Los Gatos, California. He formed his Leonardo DiCaprio Foundation in 1998 to protect biodiversity and threatened ecosystems. This past March, he announced that his philanthropic foundation is establishing "a mega-fauna sanctuary" in the Leuser Ecosystem, a precious rainforest in Sumatra, Indonesia that’s under threat from industrial development for palm oil.

“Our vision for Runa was inspired by the rich spirit of family and collaboration in the Amazonian communities that revere guayusa tea, and we’re very grateful that the quality of our products and integrity of our vision has attracted such a great group of supporters,” Gage said in the press release.

Actor Channing Tatum, an existing Runa supporter and early investor, was interviewed by ABC News earlier this year about guayusa.

The Hollywood actor said that drinking the naturally energizing beverage, which has the same caffeine content as coffee with double the antioxidants as green tea, helped him keep his energy up while he wrote the film Magic Mike.

"I grew up in the south, where I was 7/11 culture, I was McDonalds culture, I just ate stuff just cause it tasted good," Tatum told ABC News. "There's something beautiful about knowing like where this is coming from and what the story is … There's an intentional consumption that I believe is really where I hope that society's going."