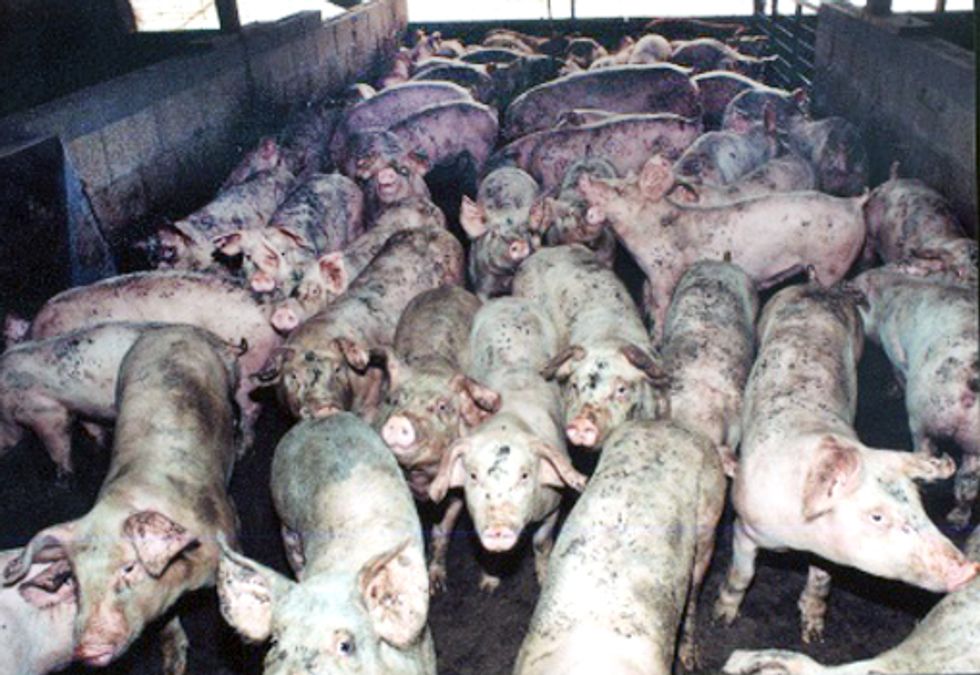 North Carolina is the second largest swine producing state in the country—producing close to 10 million hogs.

The North Carolina Environmental Justice Network (NCEJN), Waterkeeper Alliance and Neuse Riverkeeper Foundation filed a lawsuit today in federal district court against a North Carolina factory farm and its owners for polluting the Neuse and Trent Rivers. The lawsuit asserts that Taylor Finishing, Inc, a hog farm located in Trenton, N.C., and its owner are violating federal environmental laws, specifically the Clean Water Act and the Resource Conservation and Recovery Act, by illegally disposing of and discharging animal waste into creeks, rivers, ditches and lands surrounding the facility.

The suit comes several months after the expiration of a legally required notice period, during which the facility and its owner had the opportunity to bring the operation into compliance with federal environmental laws, but did not do so.

According to the lawsuit, analyses of water samples taken from around the facility from 2008 to the present reveal unacceptably high levels of nitrogen, phosphorus and fecal coliform. The North Carolina Department of Environment and Natural Resources has previously issued a violation against the facility, and sampling results have continued to reveal ongoing unlawful discharges, despite a change in ownership at the facility in December 2010.

“The hog farming industry in North Carolina continues to use our waterways and lands as a garbage dump, and the Taylor facility is yet another example of this reckless behavior,” said Gary Grant, director of the North Carolina Environmental Justice Network.

“The clear violation of the law and disregard for the local community needs to be addressed, and the lack of any agency action has convinced us that a citizen suit is the only way we can stop this behavior," said Grant.

Runoff from animal waste has drained into the Neuse and Trent Rivers, preventing members of NCEJN and others in the community from fishing, hunting and recreating in the area.

“With this lawsuit, we are seeking to put a stop to the illegal discharges of hog feces into the Neuse River watershed from the Taylor Finishing facility,” said George Matthis, executive director of the Neuse Riverkeeper Foundation. “Mismanagement from discharges with high levels of fecal bacteria, nitrogen and phosphorus are destroying the Neuse River Estuary and the laws that address this simply aren’t being enforced," he said.

“It is clear that the state knows that facilities like Taylor Finishing are discharging harmful pollutants into the Neuse River watershed through ditches and tile drains that channel swine feces directly into the water, but these practices are allowed to continue in violation of the law,” said Marc Yaggi, executive director of Waterkeeper Alliance. “When pollutants from swine feces are illegally discharged into water they endanger human health and render waters unsafe for swimming, drinking and fishing. This is especially dangerous and destructive in the Neuse River watershed which is is heavily used for outdoor recreational activities, commercial fishing and commercial shellfish harvesting.”

Today’s filing is the culmination of several years of surveying the Taylor facility and the broader North Carolina CAFO industry for discharging animal waste into community water bodies and lands. These discharges threaten the health and livelihood of those that reside, work and recreate in the area, a practice to which those filing the lawsuit seek to bring an end.