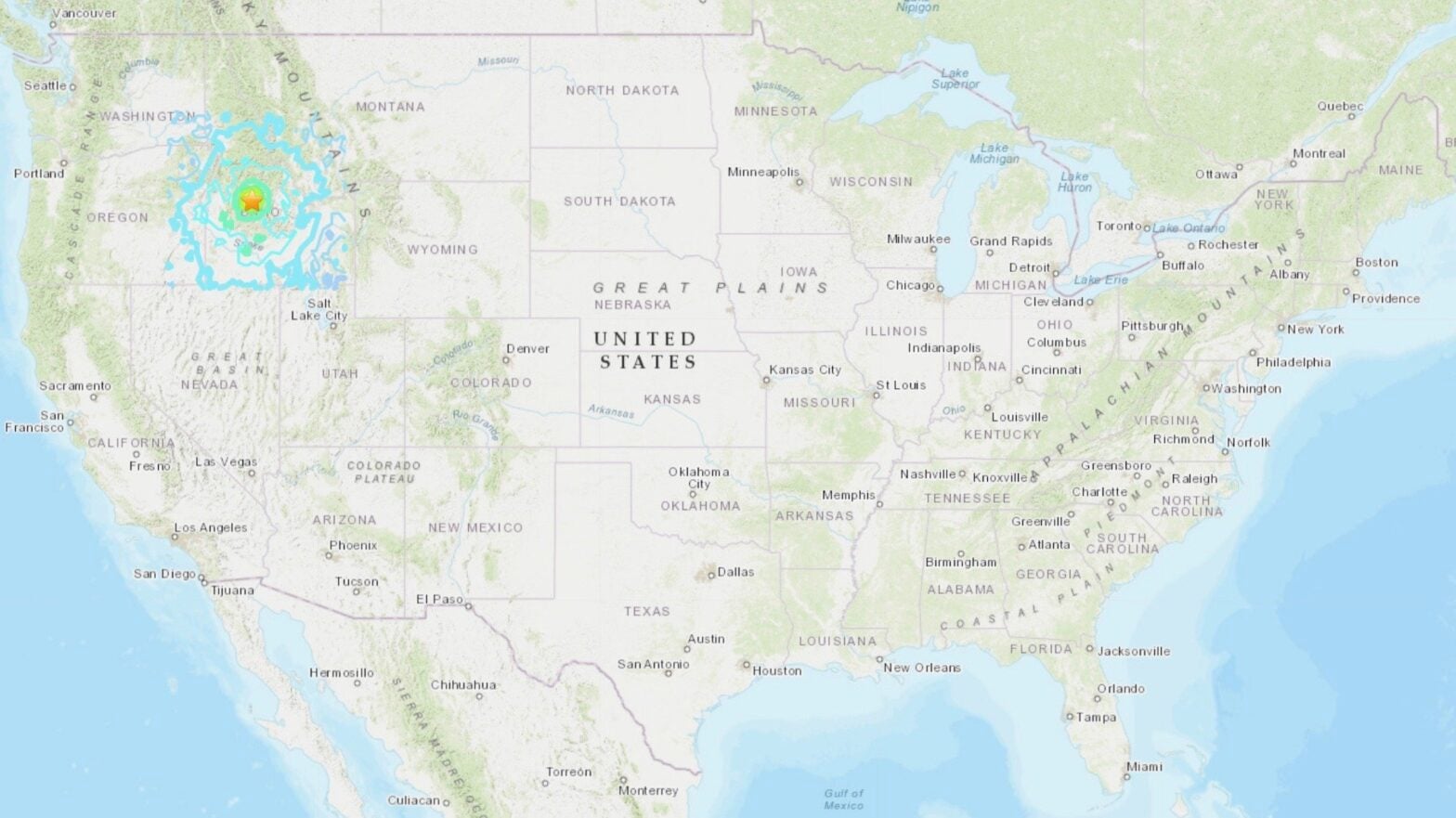 A USGS map showing the location of a 6.5 magnitude quake that shook Idaho Tuesday evening. USGS

Idaho residents were rattled Tuesday evening by the biggest earthquake to shake the state in almost 40 years.

The 6.5 magnitude quake struck just before 6 p.m. local time 73 miles northeast of Meridian, The Associated Press reported. It caused no known damage or injuries, but plenty of surprise.

“At first I thought it was thunder, weird thunder, but then the house was moving and I realized this is an earthquake — a really big earthquake,” Boise resident Melissa Hawkins, 44, told USA Today.

All told, more than two million people might have felt the earthquake, according to U.S. Geological Survey (USGS) figures reported by The Associated Press. Reports of shaking came from as far as Spokane, Washington; Bozeman, Montana; and Salt Lake City, Utah, according to USA Today.

Here's an interesting visualization of "Did You Feel It?" reports for the #IdahoEarthquake. Head over to the @USGS website to add your report if you felt it. pic.twitter.com/IIu4OgVb6z

“I actually thought I was having a dizzy spell to begin with due to my migraine,” Patton told USA Today in an email. “Our light fixtures were shaking and one of our signs on our pantry door almost fell off.”

Despite tweets warning of the apocalypse, Caltech seismologist Dr. Lucy Jones told The Associated Press that the Idaho region has an earthquake around this size every 30 to 40 years.

The last was actually much worse: the 6.9 Borah Peak earthquake of 1983. That quake struck near the town of Challis and killed two school children when they were buried under rubble, CNN reported. It also cost the state .5 million in property damage.

The 1983 quake was along a “normal fault,” which causes vertical movement, Jones told The Associated Press. Tuesday’s quake, on the other hand, was on an unmapped “strike-slip fault,” which causes horizontal movement. Jones said it was not uncommon for faults in remote areas to go unmapped, since they are less likely to cause damage.

“This is one that wasn’t obvious enough to be mapped before now,” Jones told The Associated Press.

But she further explained on Twitter why Idaho sees earthquakes.

“Idaho is part of the Basin and Range tectonic province. Everything west of the Wasatch Mtns. is getting slowly stretched out as a bit of North America tries to cling to the Pacific plate,” she wrote.

Idaho is part of the Basin and Range tectonic province. Everything west of the Wasatch Mtns. is getting slowly stretched out as a bit of North America tries to cling to thePacific plate

Jones said to expect aftershocks, and the USGS reported a 4.8 magnitude one about an hour after, according to USA Today. More, smaller tremors were felt throughout the evening.