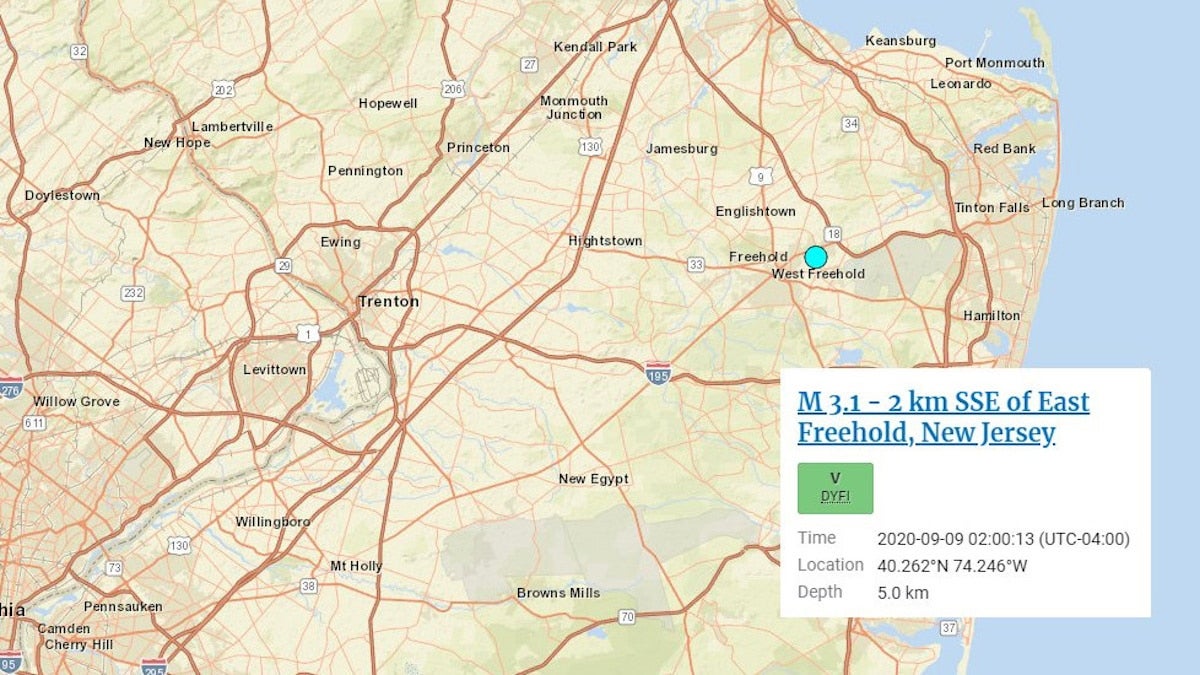 The 3.1 magnitude quake lasted 13 seconds and was epicentered about a mile and a half from Freehold Township, U.S. Geological Survey scientist Robert Sanders told North Jersey.com. The quake struck around 2 a.m. and was felt throughout central New Jersey and as far away as Philadelphia and Long Island, NBC4 New York reported.

A small tremor occurred in the Freehold area around 2:00 AM. It was felt in much of central New Jersey. #njwx pic.twitter.com/A2axmRkv7v

“It sounded like a dump truck being dropped from a few stories up, but about four to five blocks away,” a resident of Matawan, New Jersey wrote on the European-Mediterranean Seismological Center‘s (EMSC) earthquake-tracking website, NJ.com reported. “It rumbled the floor for about five seconds. I could feel [it] from my feet on the floor and through the seat of the chair.”

“It will take a few days or weeks before analysts can see if there’s a specific fault line at cause here,” Sanders said.

The earthquake prompted at least 125 911 calls in a half-hour period, the Monmouth County Sheriff’s Office said. The Freehold Police Department also said its dispatch center received dozens of calls. However, no damage was reported.

“With it being a magnitude of 3.1, a case of injuries is very unlikely,” Sanders told NorthJersey.com. “We might have [a] case of items falling off shelves and possibly landing on someone, but typically we don’t usually see any widespread damage done with a magnitude this low.”

Many people describing the quake said it did not feel like a typical shaking earthquake.

“I lived in California and have felt many earthquakes, but I didn’t recognize this as one,” a Freehold resident wrote on EMSC. “There was no shaking or movement. Just a sound like someone opening up a large sliding glass door followed by two or three very loud banging noises.”

The #earthquake M3.1 In #NJ was well felt within 30 miles of its epicenter. This map represent the eyewitnesses' reports we have received so far. Stay safe pic.twitter.com/hXEgqhlfBe

“It’s relatively common to hear a loud bang during an earthquake,” Sanders told North Jersey.com. “Smaller and more shallow earthquakes have some fault areas and therefore produce high-frequency energy for loud noises. Anyone that is close to the epicenter is likely to hear these effects from the earthquake.”

The last major earthquake to be felt in New Jersey was in 2011, when a 5.8 magnitude earthquake struck in Virginia. That was one of the largest quakes ever recorded in the Eastern U.S. and shook buildings throughout New Jersey, NJ.com reported.

New Jersey itself is due for a major earthquake, the state’s Department of Environmental Protection told NBC4 New York, citing a 5.5 magnitude quake that struck in 1884. It said a similar quake today would cause severe damage and likely claim lives.