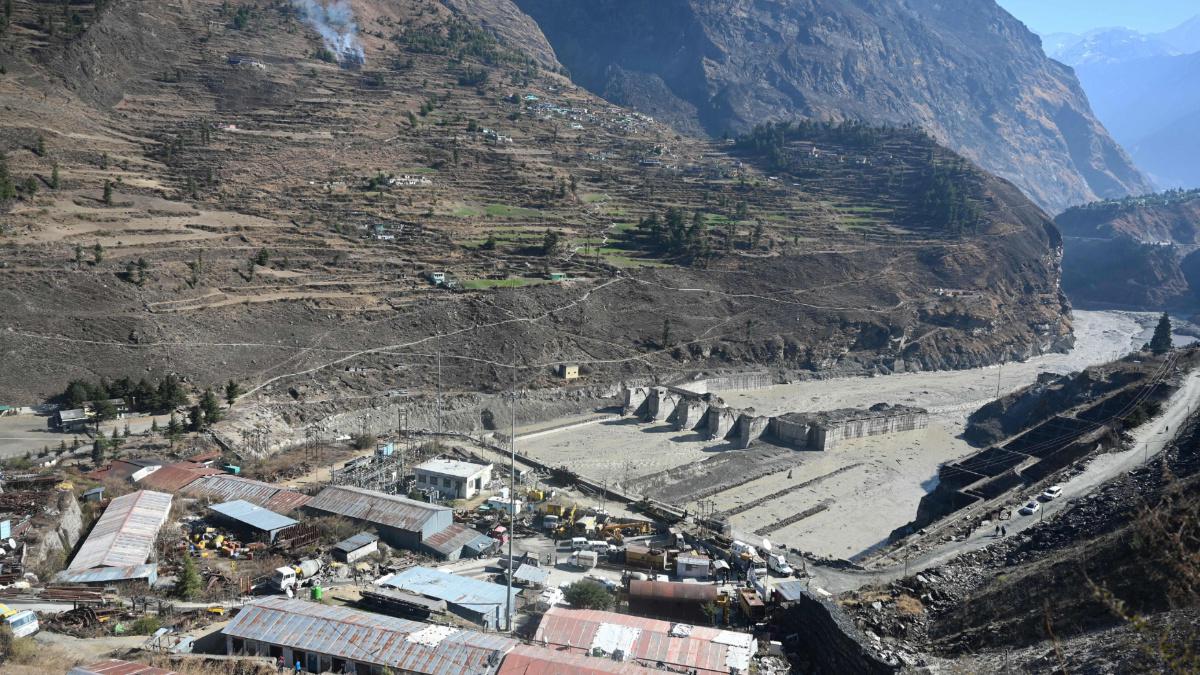 A general view shows the remains of a dam along a river in Tapovan, India, on February 10, 2021, following a flash flood caused by a glacier break on February 7. Sajjad Hussain / AFP / Getty Images

“As of now [18 March], we have found 74 bodies and 130 people are still missing,” said Swati S. Bhadauria, district magistrate in Chamoli, Uttarakhand, India. Chamoli is the district where a hanging, ice-capped rock broke off from a glacier and fell into a meltwater- and debris-formed lake below. The lake subsequently breached, leading to heavy flooding downstream.

The disaster is attributed to both development policies in the Himalayas and climate change. And as is common with climate-linked disasters, the most vulnerable sections of society suffered the most devastating consequences. Among the most vulnerable in Chamoli are its population of migrant construction workers from states across India.

Of the 204 people dead or missing, only 77 are from Uttarakhand, and “only 11 were not workers of the two dam companies,” Bhadauria noted. The two dams referred to are the 13.2-megawatt Rishiganga Hydroelectric Project and the 520-megawatt Tapovan Vishnugad Hydropower Plant, which has been under construction since 2005. The flash floods in Chamoli first broke through the Rishiganga project and then, along with debris accumulated there, broke through the Tapovan Vishnugad project 5–6 kilometers downstream.

“Both local people and others from Bihar, Punjab, Haryana, Kashmir, Uttar Pradesh…from all over India work on these two [hydroelectric] projects,” said Atul Sati, a Chamoli-based social activist with the Communist Party of India (Marxist-Leninist) Liberation.

Sati noted that the local community suspects the number of casualties from the Uttarakhand disaster may be higher than reported because not all the projects’ migrant workers—including those from bordering countries like Nepal—have been accounted for by the construction companies and their subcontractors.

The National Thermal Power Corporation is the state-owned utility that owns the Tapovan Vishnugad project. “NTPC has given building contracts to some companies,” Sati explained. “These companies have given subcontracts to other companies. What locals are saying is that there are more [than 204] who are missing. They say there were [migrant] workers from Nepal.”

NTPC and the Kundan Group (the corporate owner of the Rishiganga project) have not responded to repeated requests for comment.

“NTPC did not have a proper early-warning system,” said Mritunjay Kumar, an employee with the government of the east Indian state of Bihar. Kumar’s bother, Manish Kumar, was a migrant worker employed with Om Infra Ltd., an NTPC subcontractor. On the day of the disaster, Manish was working in one of the silt flushing tunnels of the Tapovan project and lost his life in the flooding.

Mritunjay Kumar noted that it “would have taken time” for the floodwater and debris to flow from the meltwater lake to the Rishiganga project and then to the Tapovan project. “Even if workers knew 5 minutes in advance,” he said, “lives could have been saved.”

An advance notice “would have given [Tapovan] workers at least 5–6 critical minutes,” agreed Hridayesh Joshi, an environmental journalist from Uttarakhand who reported from Chamoli after the disaster. “Many people made videos; they shouted and alerted people on site. If there was a robust early-warning system, many more lives could have been saved…even if not all, at least some would have escaped.”

“It is true that this was an environmental, climate change driven disaster. But NTPC had not taken any measures to save their workers from such disasters,” Kumar said. “They [NTPC] hadn’t even installed emergency exits for tunnel workers. The only proper exit was a road which faces the river. If NTPC had installed a few temporary iron staircases, many people could have climbed out.”

Kumar noted that the Tapovan project has been under construction since before the 2013 Kedarnath disaster, in which more than 5,000 people lost their lives as rainfall-driven floods ravaged northern India. “If they [NTPC] knew that such disasters will happen, why didn’t they install early-warning systems?” Kumar asked. “Scientists have been warning about climate change and [dam and road] constructions in the Himalayas from a very long time. Obviously, NTPC was aware.”