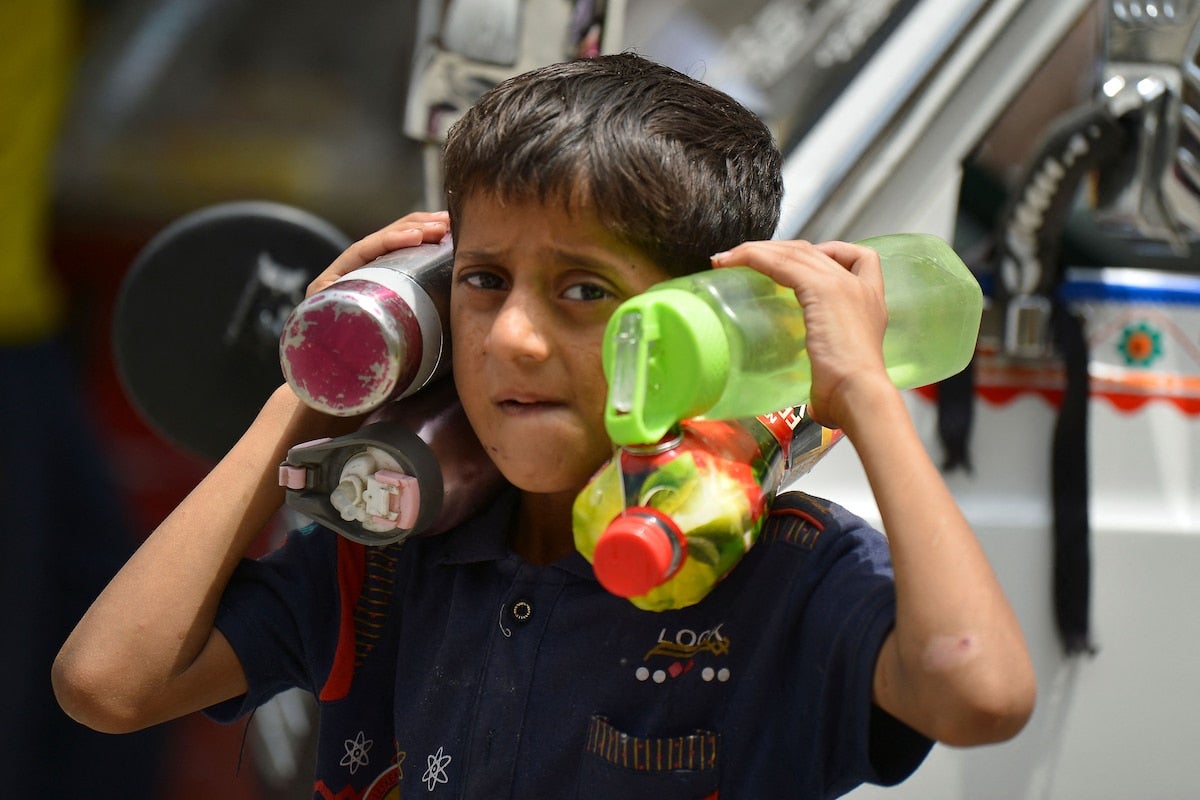 A boy carries water bottles during a heatwave in Rawalpindi, Pakistan on May 17, 2022. FAROOQ NAEEM / AFP via Getty Images

The climate crisis made the heat wave that took lives and smashed records in India and Pakistan this spring around 30 times more likely.

That’s the conclusion drawn by an international team of scientists from World Weather Attribution, who use a peer-reviewed method to determine the role of the climate crisis in extreme weather events. In a report released Monday, they found that the heat wave would have been around a full degree Celsius cooler before the industrial era.

The period of prolonged heat gave India its hottest March since record-keeping began 122 years ago, according to the report. Pakistan, meanwhile, saw the world’s highest March temperature anomaly. The month was also unusually dry, with 62 percent less rainfall than normal in Pakistan and 71 percent less rainfall in India. The hot, dry weather continued into April, impacting 70 percent of India by the end of that month. And so far, May has brought no relief.

“High temperatures are common in India and Pakistan, but what made this unusual was that it started so early and lasted so long,” study co-author Krishna AchutaRao of the Centre for Atmospheric Sciences at the Indian Institute of Technology in Delhi told USA TODAY.

Determining the likelihood of such a rare event was made difficult by the fact that in-depth temperature records for both countries only go back to 1979, the report authors said. They combined this data-set with one in India dating back to 1951 to determine that the heat wave was a one-in-100 year event. They then compared on-the-ground observations with 20 climate models to determine that the climate crisis made the event around 30 times more likely; however, they acknowledged this figure might be conservative.

Indeed, the UK’s Met Office calculated earlier this month that the climate crisis made the heat wave more than 100 times more likely. Otto told The Washington Post that this was within the range of uncertainty for the more recent study.

The study also serves as a reminder of the human impacts of the climate crisis. While its full toll is yet unknown, the heat wave has already claimed at least 90 lives, triggered glacial flooding in Pakistan, fueled wildfires in India, forced India to go back on its plan to bolster global wheat supply in response to Russia’s invasion of Ukraine and deprived millions of power.

There is an environmental justice component to these impacts, since the high heat is most felt by people like vendors and farmers who are forced by economic necessity to work outdoors.

“Thousands of people in this region, who, to begin with, contributed very little to global warming, are now bearing the brunt of it and will continue to do so if emissions are not significantly cut globally,” study co-author Arpita Mondal of the Indian Institute of Technology in Mumbai told USA TODAY. “This is a sign of things to come.”

Indeed, the study authors calculated that a heat wave like this would become two to 20 times more likely and 0.5 to 1.5 degrees Celsius hotter in a world two degrees warmer or more. While reducing greenhouse gas emissions is essential to protect people worldwide from worsening heat waves, the study authors also noted that adapting to temperature extremes can save lives.

“The main message to take away here [is] that adaptation to heat has been the absolute essential thing to do in life in every part of the world, really, but especially also in this part of the world,” Otto told The Washington Post.