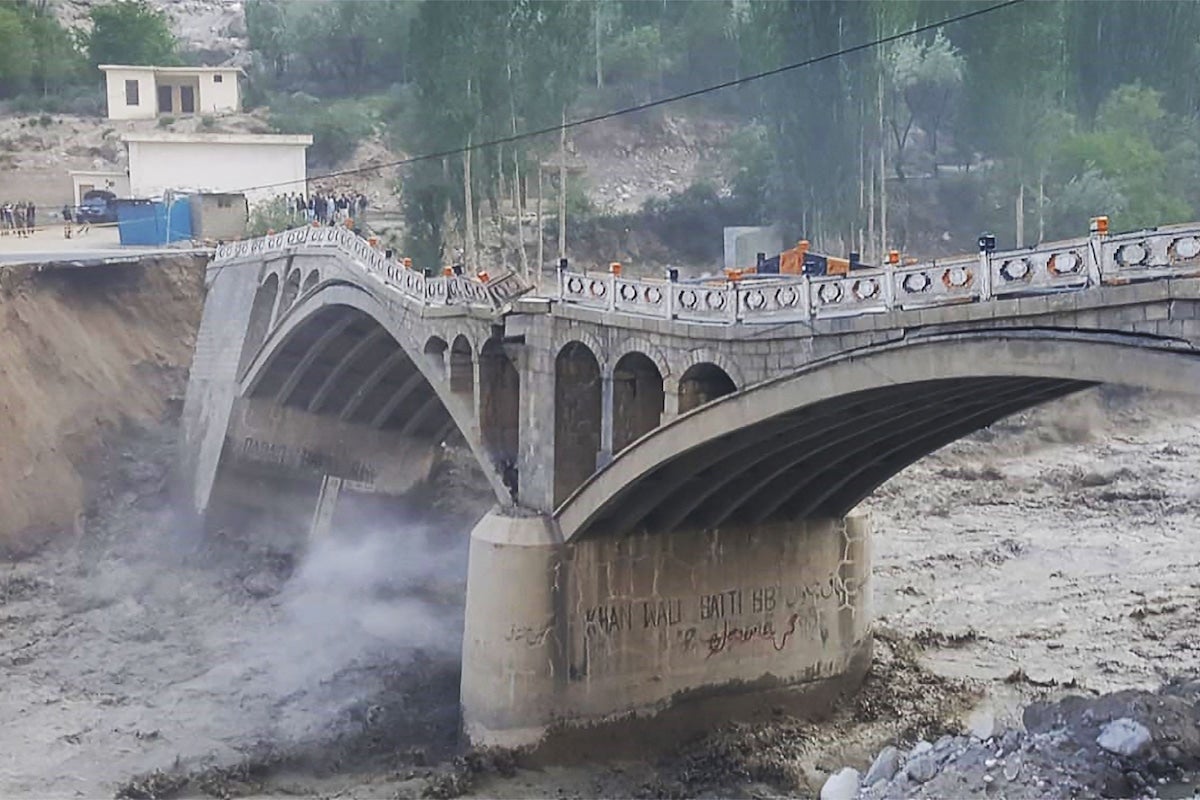 The Hassanabad bridge in Pakistan collapsed due to a flash flood. AFP via Getty Images

A record-breaking heat wave in Pakistan caused flash flooding when a glacial lake overflowed on Saturday.

The flood, known as a glacial lake outburst flood (GLOF), swept away the Hassanabad bridge on the Karakoram Highway in the village of the same name, Geo News reported. Leaders linked the incident to the climate crisis.

“Pakistan has the highest number of glaciers outside the polar region and many are losing mass due to high global temperatures,” Pakistan Climate Change Minister Sherry Rehman tweeted in response to the incident. “We need global leaders to reduce emissions, walk the talk.”

The flash flood came after a record-breaking heat wave baked both Pakistan and India this April. In Pakistan on April 30, the city of Jacobabad broke the April record for highest day-time temperature at 120 degrees Fahrenheit April 30, while the Karachi airport recorded its highest night-time temperature at 84.9 degrees Fahrenheit, The Washington Post reported. Overall, it was Pakistan’s hottest April on record since 1961.

The extreme heat caused a glacial lake near Shisper Glacier to form earlier than usual as the ice melted.

“[I]n the past 20 days, there has been 40 percent increase in the Shisper glacier lake area due to expedited glacier melting after heatwave impacts gripped the Northern Areas as mostly glacial lakes are formed in May but it got developed one month ahead in April,” remote sensing specialist at the International Centre for Integrated Mountain Development (ICIMOD) Dr. Sher Mohammad said, as the Pakistan Observer reported. “Not only are glacial lakes rapidly forming in them, but they are also appearing ahead of their normal time and bursting into floods.”

When the lake finally burst its barrier, it released water at a rate of 10,000 cubic feet per second, The Washington Post reported. In addition to destroying the bridge, the flood also swept away two power plants, according to Dawn.

Deputy Commissioner Usman Ali of Hunza, the district where the flood occurred, said a temporary bridge would be built once the lake had fully drained, according to Geo News. He said that 22 homes had been evacuated and that the system providing water for drinking and agriculture had also been destroyed.

“Over a dozen houses, a community center, among properties worth tens of millions lost in #Hasanabad village of #Hunza, within a matter of hours,” Pamir Times reported on Twitter.

Fortunately, no one was injured, according to local media reports relayed by NHK.

The threat of GLOFs is not new to Pakistan, Ali told The Washington Post.

“This glacier melting is worrisome because it’s now happening on an almost annual basis,” he said. “All of this is related to climate change.”

Further, the country could see more such incidents this year.

“Extreme and prolonged heat in Pakistan has helped trigger a Glacial Lake Outburst Flood with catastrophic consequences,” Scottish meteorologist Scott Duncan warned on Twitter. “Sadly, there could be more to come. Temperatures will inevitably surpass the 50°C mark in the coming days as the heat intensifies in Southern Asia.”