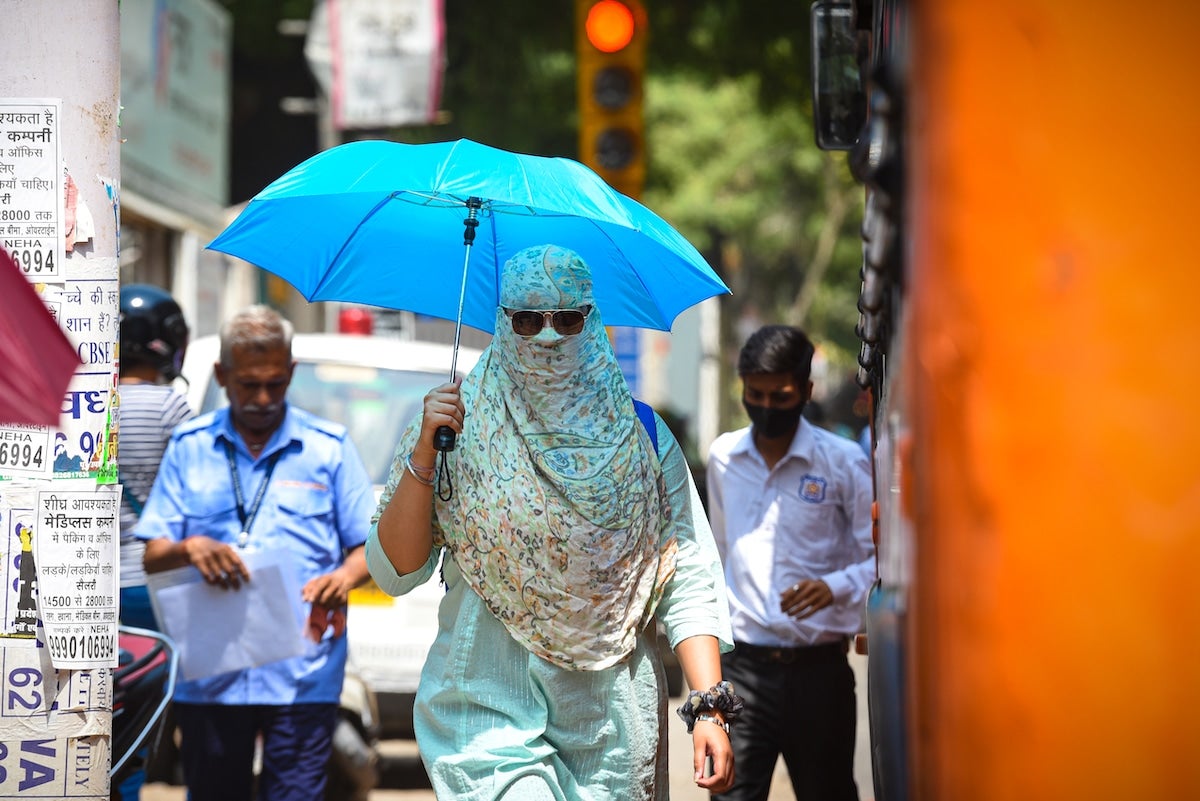 Commuters in New Delhi, India during a heatwave on May 2, 2022. Sanchit Khanna / Hindustan Times via Getty Images

At least a billion people sweltered under extreme temperatures in India and Pakistan this weekend as the two countries endure a record-breaking heat wave.

Northwest and central India saw their highest average maximum temperature for April since record keeping began 122 years ago, according to Indian Meteorological Department data reported by CNN. Meanwhile, Jacobabad, Pakistan reached 49 degrees Celsius on Saturday, which is one of the hottest April temperatures ever recorded, according to The Guardian.

“We are living in hell,” Nazeer Ahmed of Turbat, Pakistan told The Guardian.

Ahmed’s experience exemplifies what happens when extreme weather fueled by the climate crisis strains the ability of a nation’s infrastructure to meet it. Both Pakistan and India are dealing with energy shortages, and Ahmed said that Turbat does not receive enough energy to power refrigerators or air conditioners.

Electricity demands have also resulted in coal shortages in parts of India, some of which have been without power for as many as nine hours a day, according to CNN. Some states have also canceled school, since traveling to the classroom in high heat put strain on students’ health and caused some of them to develop nose bleeds.

“We don’t have a heat action plan and there are gaps in planning,” Dr. Chandni Singh, Intergovernmental Panel on Climate Change lead author and senior researcher at the Indian Institute for Human Settlements, told CNN. “You can only adapt so much. This heatwave is testing the limits of human survivability.”

Singh said the “unprecedented” heat wave was in keeping with what scientists predicted would happen as global temperatures continue to rise due to the burning of fossil fuels.

“It is premature to attribute the extreme heat in India and Pakistan solely to climate change. However, it is consistent with what we expect in a changing climate. Heatwaves are more frequent and more intense and starting earlier than in the past,” World Meteorological Organization Secretary-General Professor Petteri Taalas said in a statement.

India also experienced its hottest March on record, and this has harmed its wheat crop, AP News reported. Further, the hot temperatures means that around seven million people are at risk from flooding as glaciers melt quickly in the Himalaya, Hindu Kush and Karkoram mountains, Reuters reported.

Both countries are expected to see some relief this week, with temperatures falling by three to four degrees Celsius in Northwest India and returning to a seasonal average of 40 degrees in Pakistan, CNN reported.

However, heat waves like this will only persist if nothing is done to reduce global greenhouse gas emissions.

“Historical emitters of greenhouse gases have to step up because we are, in countries like India and Pakistan, really hitting the limits of adapting to heat,” Singh told Democracy Now.