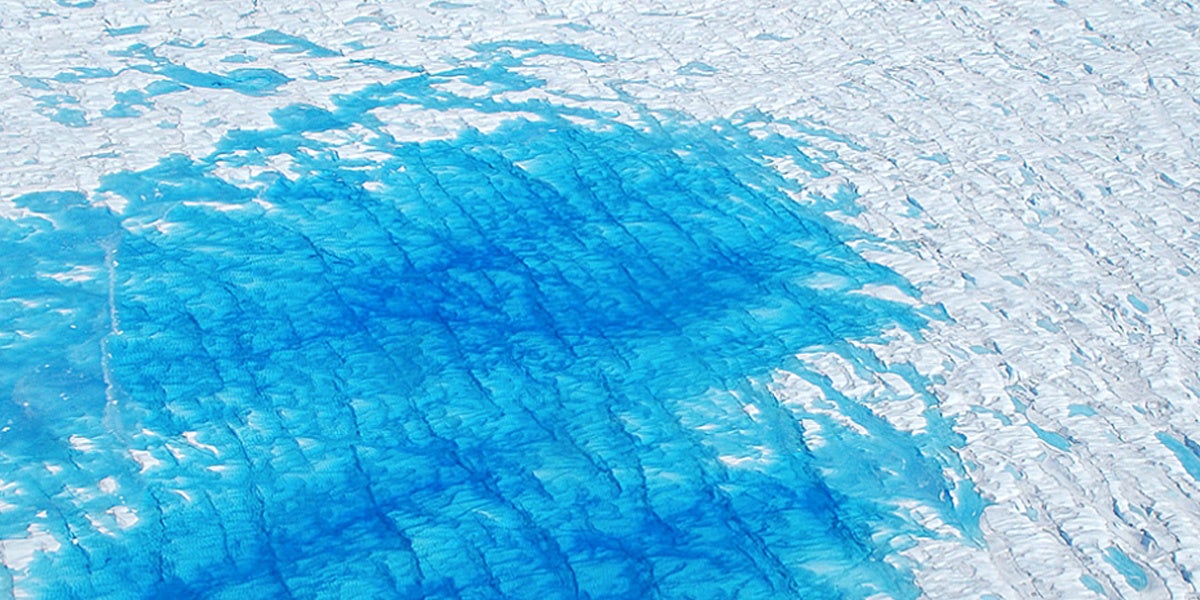 It had long been known that these lakes could drain quickly on an individual basis. They can last months, then drain through more than one kilometer (approximately 0.621 miles) of ice within hours.

However, this study used a combination of observation and three-dimensional modeling to show that the lakes do not drain in isolation. Instead, the melting of one lake can trigger the melting of lakes up to 80 kilometers (approximately 49.71 miles) away.

The process begins when a lake drains and the water it contained ends up on the bottom of the ice sheet. This causes the sheet to flow faster, which destabilizes it and leads to the formation of more fractures. Other lakes then drain through these new fractures in a chain reaction that can speed the flow of the ice sheet by up to 400 percent. A model of the lake-melting chain-reaction process. Nature Communications

Researchers observed 124 lakes drain within a span of five days, and found evidence for crevices opening 135 kilometers (approximately 83.9 miles) inland from the ice sheet’s edge, which is farther than thought possible.

The study therefore contradicts the findings of the Fifth Assessment Report by the Intergovernmental Panel on Climate Change, published in 2014, which held that melt water on the surface of the ice sheet did not impact its flow.

“This growing network of melt lakes, which currently extends more than 100 kilometres inland and reaches elevations as high as 2,000 metres above sea level, poses a threat for the long-term stability of the Greenland ice sheet,” the study’s lead author and member of Cambridge’s Scott Polar Research Institute Dr. Poul Christoffersen said in the press release.

This isn’t the first study in recent years to suggest the Greenland ice sheet is in more trouble than previously believed. In 2016, scientists found the ice sheet was melting 7 percent faster than they had thought.

While the Polar Portal reported that the ice sheet actually gained a small amount of mass in 2017 due to heavy winter snows and a cool summer, the National Oceanic and Atmospheric Administration calculated that the sheet could only regain the mass it has lost since 2002 after 80 years like this one.

According to Global Citizen, the ice sheet, which is seven times the size of the United Kingdom and two miles thick, is currently contributing to global sea level rise at a rate of one millimeter (approximately 0.04 inches) per year. If all the ice in the sheet were to melt, it would raise sea levels by more than 20 feet.

This is unlikely to happen any time soon, but that doesn’t mean there’s nothing to worry about.

“When we say the ice sheet is melting faster, no one saying it’s all going to melt in next decade or the next 100 years or even the next 1,000 years but it doesn’t all have to melt for more people to be in danger,” Dr. Joe Cook, a glacial microbiologist at Sheffield University, told Global Citizen. “Only a small amount has to melt to threaten millions in coastal communities around world.”