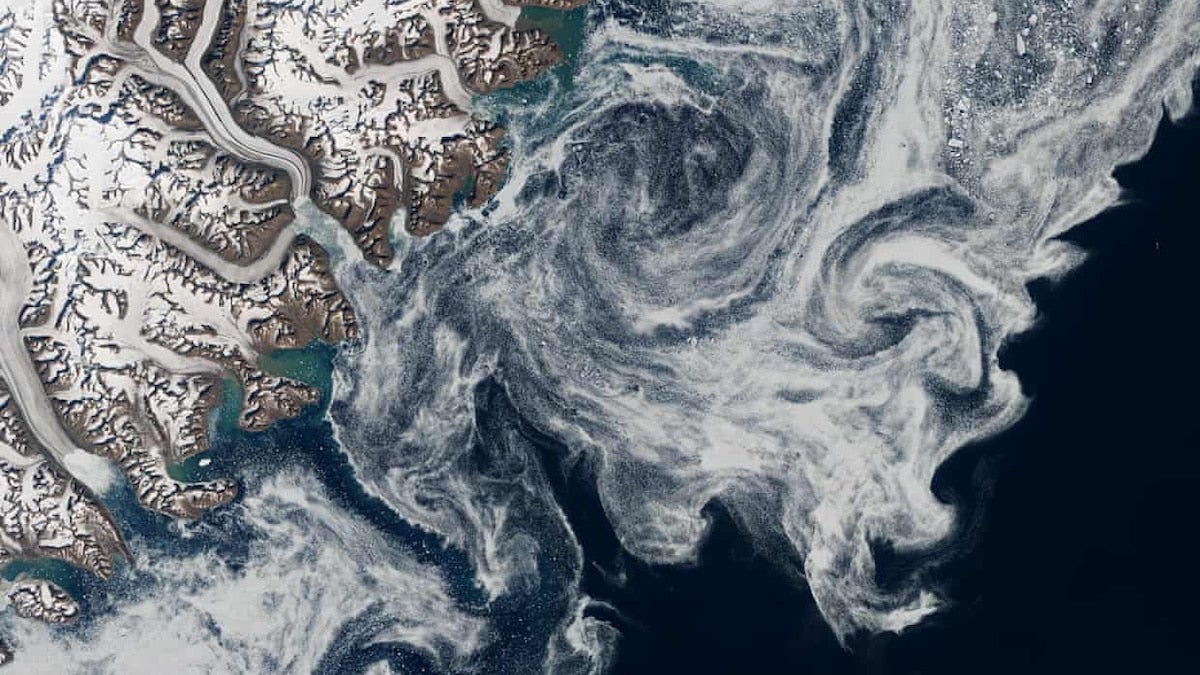 Arctic sea ice in the Denmark Strait on the east coast of Greenland. NASA

The records of Greenland‘s ice melt date back to 1948 and nothing in that record compares to what happened in 2019. The amount of ice lost was more than double what it has been any year since 2013. The net ice loss in 2019 clocked in at more than 530 billion metric tons for 2019. To put that in context, that’s as if seven Olympic-sized swimming pools were dumped into the ocean every second of the year, according to The Guardian.

The new study, which used NASA satellite data to measure the size of Greenland’s ice, found that in July alone, Greenland lost 223 billion tons of ice. That means for that one month, it lost what it normally loses in an entire year, according to The New York Times.

The study was published Thursday in Communications Earth and Environment. It follows a trend of troubling news coming out of Greenland. Another new study published in the same journal found that even if the climate crisis stopped today, Greenland’s ice sheet is so diminished it will never recover, as EcoWatch reported earlier this week. That study found the ice is retreating in rapid bursts and may portend an ominous revision of predictions of sea level rise.

This new study also spells trouble for coastal cities as it may force scientists to revise their predictions to match the accelerated pace of ice melt, as Reuters reported. The island’s ice sheet holds enough water to raise sea levels by 20 feet, or six meters, if it were to melt away completely.

“We are likely on the path of accelerated sea level rise,” said Ingo Sasgen, a glaciologist at the Alfred Wegener Institute for Polar and Marine Research and co-author of the study, to Reuters. “More melting of the ice sheet is not compensated by periods when we have extreme snowfall.

“What this shows is that the ice sheet is not only out of balance but it’s increasingly likely to produce more and more extreme loss years,” he added, as CNN reported.

Sasgen noted that 2010 and 2012 were also years with massive amounts of melting and he expects more are in the not-too-distant future.

“The real message is that the ice sheet is strongly out of balance,” Sasgen said, as The Guardian reported. “If we look at the record melt years, the top five occurred in the last 10 years, and that is a concern. But we know what to do about it: reduce CO2 emissions.”

Greenland’s ice sheet is the second largest in the world, behind Antarctica’s. CNN notes that the amount of ice it loses everywhere will start to increase sea level beyond the one millimeter it adds annually, pointing out that planet-heating greenhouse gas emissions are the culprit. And all that warming is creating a dangerous feedback loop.

“This extreme melt kicks off feedbacks that may accelerate the mass loss. This is what is worrying, the extremes are increasing and we understand too little about how the ice sheet will respond to more extreme climate variability,” Sasgen said, as CNN reported.

The amount of melting that’s happening means trouble for the hundreds of millions of people that live along coastlines, but there is still time for them to retreat inland. The ice sheet will likely not melt entirely since the rate of melt tends to slow down as the ice retreats from warmer ocean waters. Furthermore, the centuries it will take to melt completely gives us some time to reverse course on emissions, according to The Guardian.

“If we reduce CO2, we will reduce Arctic warming and we will therefore also reduce the sea level rise contribution from the Greenland ice sheet,” Sasgen said, as The Guardian reported. “So even though it might eventually disappear in large part, it happens much slower, which would be better as it would allow more time for the 600 million people living near coasts to move away.”