‘This Should Scare the Hell Out of You’: Photo of Greenland Sled Dog Teams Walking on Melted Water Goes Viral 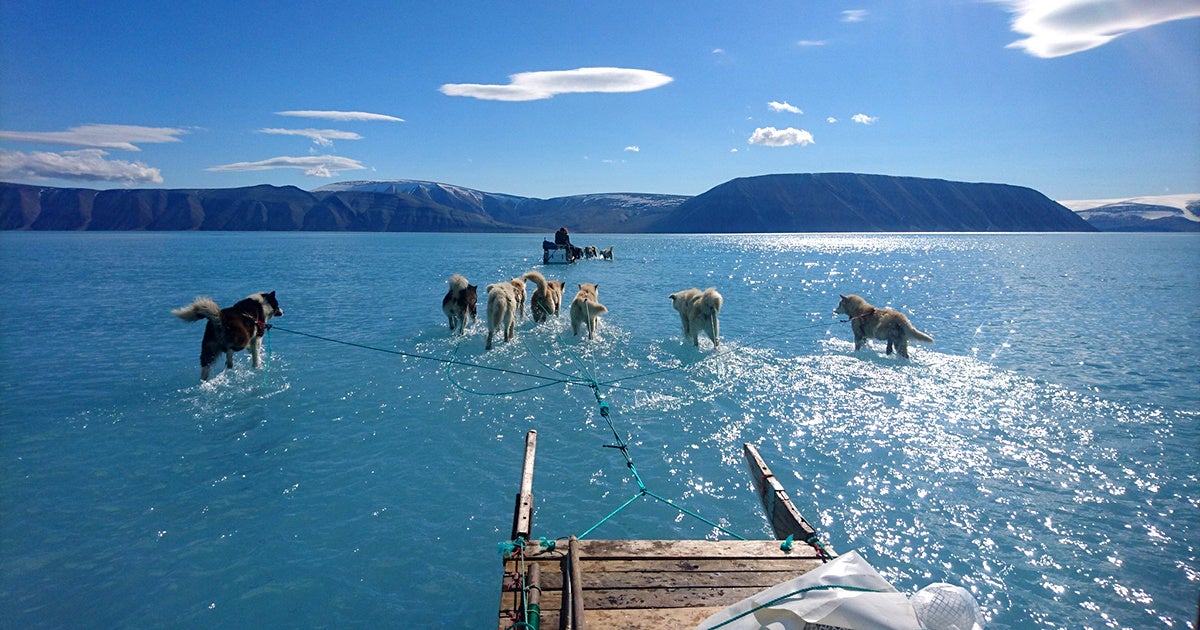 In yet the latest shocking image depicting just how fast the world’s natural systems are changing due to the global climate emergency, a photograph showing a vast expanse of melted Arctic ice in Greenland — one in which a pair of sled dog teams appear to be walking on water — has gone viral.

The photo, taken by researcher Steffen Olsen from the Centre for Ocean and Ice at the Danish Meteorological Institute just last week, showed two teams of dogs pulling sleds designed for ice and snow through ankle-deep water atop a melted ice sheet in the country’s Inglefield Bredning fjord.

@SteffenMalskaer got the difficult task of retrieving our oceanographic moorings and weather station on sea ice in North West Greenland this year. Rapid melt and sea ice with low permeability and few cracks leaves the melt water on top. pic.twitter.com/ytlBDTrVeD

“This is beautiful the way fiery balls of lava are beautiful: deadly,” said freelance writer Robin Hamilton in response to the photograph.

Olsen was part of an expedition sent to the region to retrieve research equipment, but as the Washington Post reported the team encountered much more melting than anticipated: “Data from the National Snow and Ice Data Center show that the Greenland ice sheet appears to have witnessed its biggest melt event so early in the season on record this week (although a few other years showed similar mid-June melting).”

As journalist John Iadarola tweeted, the photo — despite having a majestic quality — represents a terrifying symbol of a world that is rapidly warming:

Greenland was FORTY degrees above normal.

This should scare the hell out of you.

This is not a problem for future generations. This isn't a problem twenty years in the future. Climate breakdown is happening NOW. https://t.co/fjQ93qCavR

This spring, Greenland is melting 3x faster even than in the early phases of the global warming era. https://t.co/GlWf7cT8kJ

Writing for Oil Change International on Tuesday, environmental writer Andy Rowell warned that “Arctic scientists are speaking out with increasing alarm at what they are seeing, and as they keep repeating ‘what happens in the Arctic doesn’t stay in the Arctic.'”

Citing the dog sled photo and other evidence that continues to pile up, Rowell wrote, “The news coming out of the Arctic over the last few days is further evidence of our rapidly evolving climate emergency, which has ramifications for all of us.”