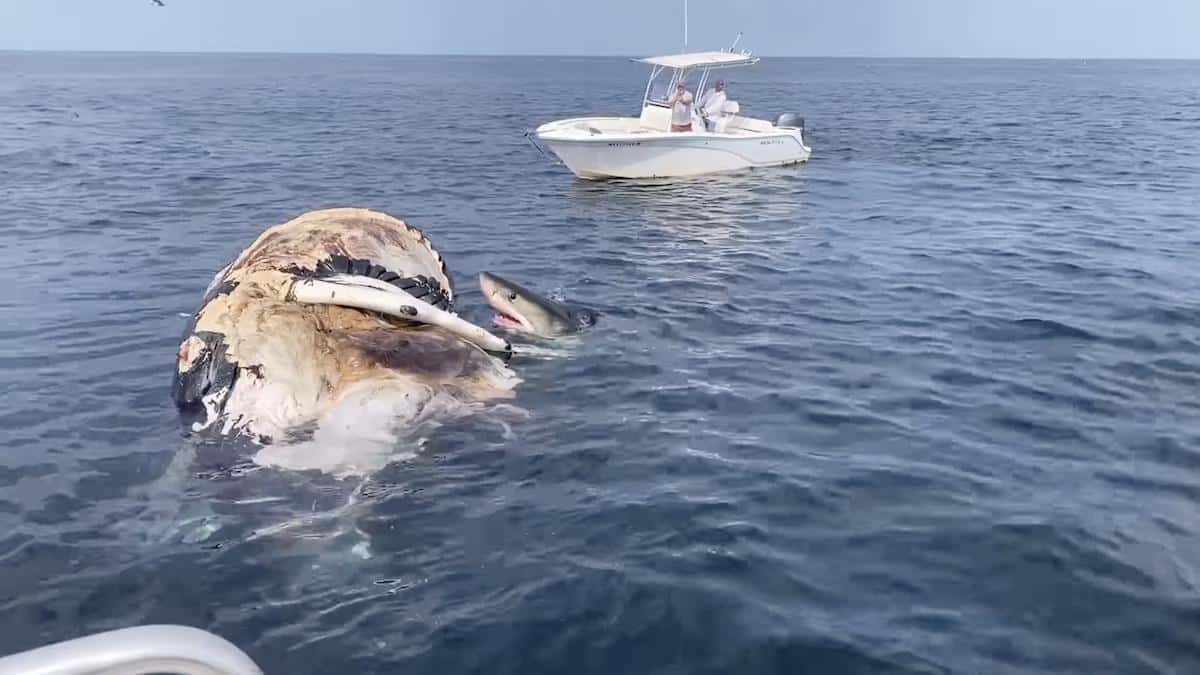 The death of a humpback whale off the Cape Cod coast was a tragedy for the marine mammal, but an opportunity for sharks.

A total of eight great white sharks were seen feasting on the whale carcass in mid-August, The Guardian reported.

“A dead whale is a lot of really easy food for great white sharks,” New England Aquarium whale-research-team leader Peter Corkeron told the Boston Herald. “They’re easy to find. They float and hang around. A dead whale is like the biggest smorgasbord a shark could ever dream of.”

The feast was first caught on camera and posted on Facebook by the whale watch tour Captain John Boats.

Captain John Goggin, who leads the tours, told the Boston Herald that he and his guests had spotted the whale carcass in Cape Cod Bay near Provincetown. They then discovered two great whites feeding on the whale, one of which was 18 feet long.

“It was the first time I had ever seen this happen,” Goggin told the Boston Herald.

The National Oceanic and Atmospheric Administration (NOAA) told The Guardian that a total of eight great white sharks visited the whale within two days of the first encounter. Blue sharks and sea birds also took advantage of the ready meal. NOAA posted its own video of the feast.

In addition to being a feeding bonanza for marine life, the incident was also an opportunity for researchers, who were able to tag five of the great white sharks that visited the carcass, according to The Guardian.

The carcass was helpful to whale researchers as well. The Center for Coastal Studies (CCS) said on Facebook that they were able to identify the dead whale as an unnamed but catalogued whale who was the 2020 calf of another whale named venom.

“This is an individual who was well-known to CCS scientists, as well as whale watchers off the coast of Massachusetts. The cause of his death is not known at this time,” the researchers wrote. “While it is sad to learn that an individual has died, documenting these events is essential for long-term population studies.”

The incident comes as humpback whales are experiencing an Unusual Mortality Event (UME) along the Atlantic Coast from Maine to Florida, according to NOAA. The event began in 2016, and the cause is still unknown. Some of the stranded whales appear to have been struck by vessels, but others have not. CCS said the new carcass could provide more data to help understand the UME.

The latest shark sightings come as the number of great white sharks in the Cape Cod area have increased in recent years. Experts say the shark presence is due to another prey animal: gray seals. The seals’ numbers have risen due to marine protections, which means the sharks have followed.