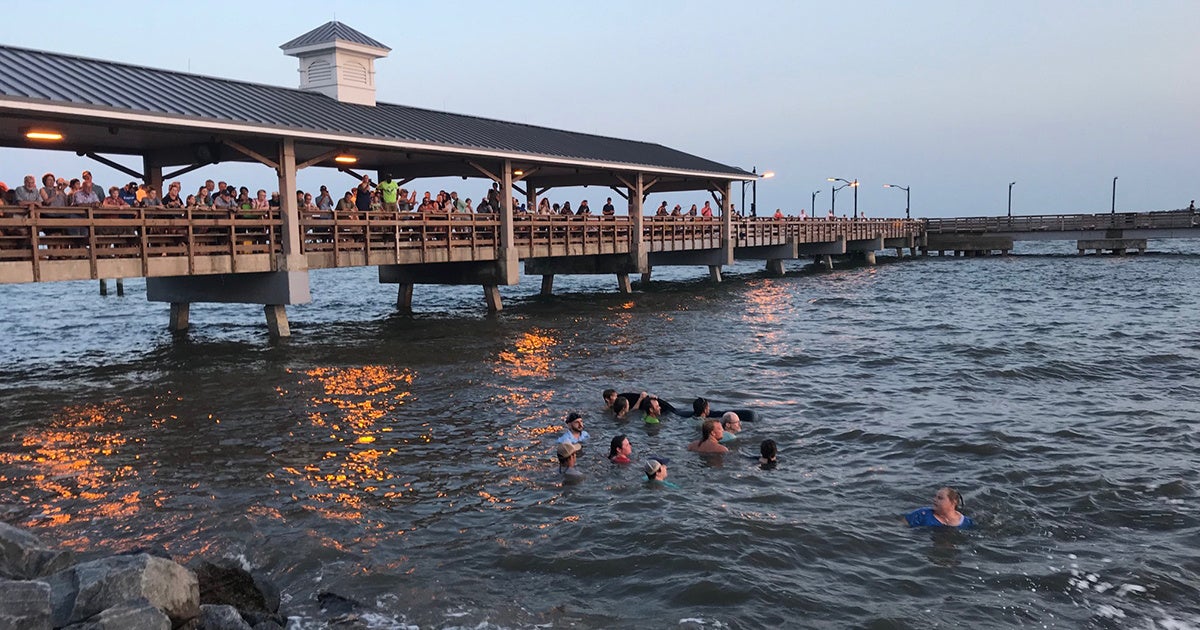 Beachgoers enjoying a pleasant evening on Georgia’s St. Simons Island rushed into the water, despite warnings of sharks, to rescue dozens of short-finned pilot whales that washed ashore on Tuesday evening, according to the New York Times.

The dramatic rescue by the citizen volunteers was caught on video and streamed on Facebook live by Dixie V. McCoy who was on the beach with her 2-year-old granddaughter. McCoy captured dozens of volunteer beachgoers, including kids and lifeguards, in the impromptu operation pushing and shoving the whales and scooping handfuls of water on to them in the 15-minute video that went live around 6 p.m. on Tuesday.

“They’re going to die if they don’t get help,” said McCoy in the video. “All these whales have been washed up to shore and there’s already been one whale that’s been attacked by a shark. It is so sad.”

The rescue effort worked wonders, as only three of the beached whales perished, according to a statement from the Georgia Department of Natural Resources (DNR). And, unbeknownst to the volunteers, their strategy was exactly right.

“While stranding is a known natural occurrence, the only thing we can do is to continue pushing them out to sea,” said Clay George, a biologist for Georgia’s DNR.

Harbor pilots spotted a pod of more than 40 whales in the Brunswick shipping channel on Wednesday morning. Conservationists from the National Marine Mammal Foundation then monitored the whales from a boat to make sure they stayed in deep waters and far offshore, said DNR spokesman Rick Lavender, as USA Today reported.

A helicopter searched for more stranded whales along the coastline, but none were found.

“We’re cautiously optimistic that the group dodged a bullet, and that they’re now on their way to deeper water,” said George.

Pilot whales are essentially very large dolphins that can grow up to 24-feet in length and weigh over 6,600 pounds. Maneuvering them back into the water is a Herculean task. So, volunteer rescuers focused on turning the whales so they were faced offshore, encouraging them to head into deeper waters, where a large group from their pod was swimming about 300-feet offshore, according to Vice.

“The water was full of immense black fins and bodies rolling in the surf; these were huge animals,” said David Steen, a research ecologist at the Georgia Sea Turtle Center who participated in the rescue effort, as Vice reported.

It is not clear why pilot whales move so close to shore. There have been 23 mass standings in Southeastern states since 1991, but never in Georgia. Two years ago, over 400 pilot whales washed ashore in New Zealand and over 70 percent of them perished. There are several theories for their behavior—perhaps since they are so social, one confused whale can lead an entire pod ashore. Cetaceans are social creatures that live in groups, and it’s possible that one confused whale can lead an entire pod astray. Another theory formed from necropsies of stranded whales posits that sinus and ear parasites or injuries from seismic activity, such as US Navy sonar tests or oil exploration, impair a whale’s senses and ability to navigate waters, according to Vice.

In the necropsy of the three whales that didn’t make it, researchers will look for ingested plastic or evidence of plastic netting. They will also look for signs of an acoustic disturbance, like bombs or sonars, that could have caused one or more of the animals to swim toward land, as the New York Times reported.

“Tomorrow will be the beginning of a process that could go on for potentially weeks,” he said.