On Climate Crisis and COVID-19, G7 Is Judged a ‘Colossal Failure’ 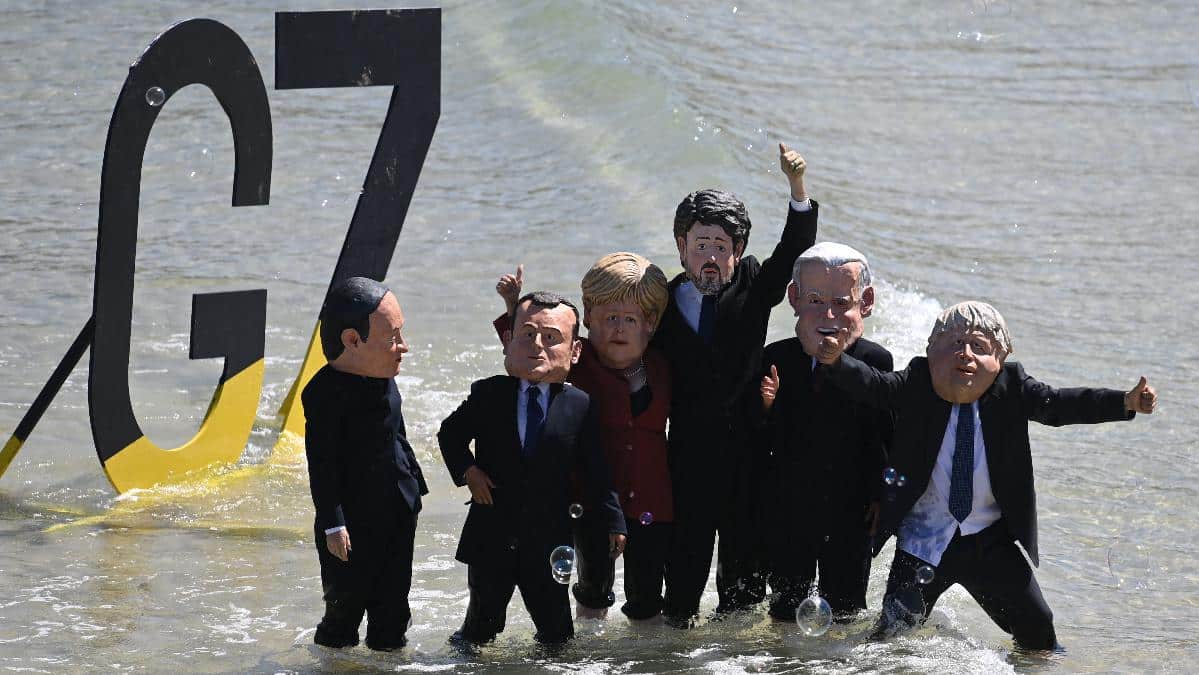 Anti-poverty groups, climate campaigners, and public health experts reacted with outrage and howls of disappointment Sunday after the G7 leaders who spent the weekend at a summit in Cornwall, England issued a final communique that critics said represents an extreme abdication of responsibility in the face of the world’s most pressing and intertwined crises — savage economic inequality, a rapidly-heating planet, and the deadly COVID-19 pandemic.

“This G7 summit will live on in infamy,” declared Max Lawson, Oxfam’s head of inequality policy, in a statement responding to the G7 communique at the conclusion of the weekend summit — a gathering characterized by the global progressive movement as an unmitigated disaster compared to what could have been achieved.

“Faced with the biggest health emergency in a century and a climate catastrophe that is destroying our planet,” Lawson said, the leaders of the richest nations “have completely failed to meet the challenges of our times. Never in the history of the G7 has there been a bigger gap between their actions and the needs of the world. In the face of these challenges the G7 have chosen to cook the books on vaccines and continue to cook the planet. We don’t need to wait for history to judge this summit a colossal failure, it is plain for all to see.”

The G7 statement does vow to “[e]nd the pandemic and prepare for the future by driving an intensified international effort, starting immediately, to vaccinate the world by getting as many safe vaccines to as many people as possible as fast as possible” — and the member nations pledged a collective 1 billion doses will be donated to benefit middle- and low-income nations. However, public health experts have been adamant that voluntary charity and empty rhetoric — especially in the the absence of a joint commitment to lift patent protections for life-saving vaccines at the World Trade Organization — makes clear the richest nations would still rather protect the profits of the pharmaceutical industry than serve the world’s poor or see the pandemic eviscerated.

This was a missed opportunity for #G7 countries – who have done most to fuel the crises of Covid, climate & inequality – to take responsibility & act with the urgency or scale of action needed. Rehashed promises & inadequate action fails people & planet https://t.co/JZ9wZQ2cQP

On Sunday, Global Justice Now executive director Nick Dearden — who has been on the ground in Cornwall throughout the summit — called the communique “shameful,” a document that “stresses ‘vaccines are a public good’ and ‘we need equitable access’ while then reinforcing the intellectual property system which enshrines the very opposite principles.”

“The G7 is not fit for purpose,” Dearden tweeted. “They have operated without any concern for lives around the world — or even for our own ability to end this pandemic.” Dearden said it was now clear that “profits first” is the true commitment of UK Prime Minister Boris Johnson and the other G7 leaders, and Global Justice Now suggested the only people who will be celebrating the bloc’s lack of ambition will be Big Pharma and its allies:

Success! I blocked a plan to make billions of Covid jabs as fast as possible, to protect big pharma profits.

Meanwhile, the G7’s specific response to the climate crisis was seen as paltry, even if a modest step in the right direction. Thousands of climate activists demonstrated Saturday to demand the G7 leaders finally match their actions with some of their recent promises, but again the ambitions put forth Sunday by U.S. President Joe Biden, Chancellor Angela Merkel of Germany, and the other powerful leaders were seen as more of the same kind of failure that has become all too familiar.

“This summit feels like a broken record of the same old promises,” said John Sauven, Greenpeace UK’s executive director. “There’s a new commitment to ending overseas investment in coal, which is their piece de resistance. But without agreeing to end all new fossil fuel projects — something that must be delivered this year if we are to limit dangerous rises in global temperature — this plan falls very short.”

The G7 plan touted by its members on Sunday, said Sauven, “doesn’t go anywhere near far enough when it comes to a legally binding agreement to stop the decline of nature by 2030. And the finance being offered to poorer nations is simply not new, nor enough, to match the scale of the climate crisis.”

Despite the G7 communique’s new pledge to end future financing of coal projects worldwide and restating its Paris Agreement pledge to keep global temperatures from rising more than 1.5 ºC by 2050, those promises fall intensely short of what the scientific community says is necessary to address the climate emergency.

“The G7 has now fallen squarely behind what leading economists, energy analysts, and global civil society has shown is required: an end to public finance for all fossil fuels,” said Laurie van der Burg, senior campaigner for Oil Change International, on Sunday. “Our climate cannot afford further delay, and the failure of the G7 to heed these demands means more people impacted by the ravages of our climate chaos.”

“Between 2017 and 2019, G7 nations spent $86 billion in public finance for fossil fuels,” van der Burg continued. “Every single cent of that makes it harder to reach our climate goals. That’s why more than one hundred economists as well as hundreds of civil society organizations from around the globe called on these leaders to end this public support for dirty fuels and shift this money to real solutions. Unfortunately those calls were not met with action, and our climate and communities — particularly the most vulnerable in the Global South — will feel the consequences.”

The climate and ecological crisis is rapidly escalating. G7 spends fantasy amounts on fossil fuels as CO2 emissions are forecast for 2nd biggest annual rise ever.

This calls for steak-and-lobster-BBQ-celebration while jet planes perform aerobatics in the sky above the G7 resort! pic.twitter.com/iAKEit9aCB

David Turnbull, Oil Change’s strategic communications director, put specific emphasis on Biden’s responsibility heading into the summit — his first overseas trip as U.S. President — and his failure to seize the historic moment or establish himself as a truly transformational leader on the global stage.

“Biden’s first trip abroad unfortunately can be chalked up as a missed opportunity,” Turnbull said. “Despite strong statements about ending U.S. international support for all fossil fuels in the first few months of his administration, President Biden has yet to turn those statements into true action. The G7 was a key moment to show that the U.S. can be a leader in moving the world forward on bold climate action, and unfortunately that leadership has not yet revealed itself.”

The lack of funding for climate adaptation for poorer nations — those that have done the least to create the climate threat but suffer the most because of it — was also highlighted by Oxfam International.

“This plan could support green development in poorer countries,” said Oxfam’s climate change lead Nafkote Dabi, “but it is lacking in detail including on who will foot the bill. It also appears to champion infrastructure to reduce emissions, while many communities are screaming out for support to adapt to the impacts of climate change — an area that remains woefully underfunded.”

Jennifer Morgan, executive director of Greenpeace International, made the explicit connection between poverty, the COVID-19 pandemic, and the climate emergency.

“Everyone is being hit by COVID-19 and worsening climate impacts,” Morgan said, “but it is the most vulnerable who are faring the worst due to G7 leaders sleeping on the job. We need authentic leadership and that means treating the pandemic and the climate crisis for what they are: an interconnected inequality emergency.”

“The solutions to the climate emergency are clear and available,” she continued, “but the G7’s refusal to do what’s needed is leaving the world’s vulnerable behind. To fight COVID-19, supporting a TRIPS waiver for a People’s Vaccine is crucial. To lead us out of the climate emergency, the G7 needed to deliver clear plans to quickly phase out fossil fuels and commitments to immediately stop all new fossil fuel development with a just transition.”

Where, she asked, “is the clear national implementation with deadlines and where is the climate finance so urgently needed for the most vulnerable countries?”

According to the global movement for climate action and a just solution to the pandemic, such things are not to be found in anything that came out of Cornwall over the weekend.