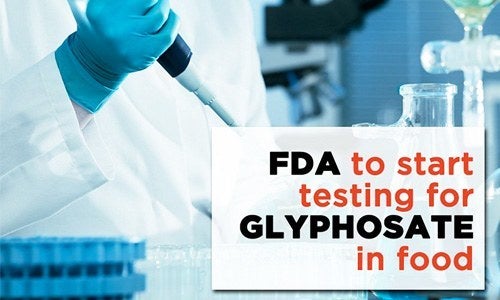 The Food and Drug Administration (FDA) will begin testing food for glyphosate, the world’s most commonly used pesticide, according to Civil Eats. This marks the first time that a U.S. agency will routinely test for glyphosate residue in food. It comes after the Government Accountability Office released a report condemning the FDA for failing even to disclose its failure to test for glyphosate in its annual pesticide residue report.

The World Health Organization (WHO) found that glyphosate, commonly known as Roundup, was a probable human carcinogen and glyphosate has been named as a leading cause of massive declines in monarch butterflies.

“In the wake of intense scrutiny, the Food and Drug Administration has finally committed to taking this basic step of testing our food for the most commonly used pesticide. It’s shocking that it’s taken so long, but we’re glad it’s finally going to happen,” Dr. Nathan Donley, a scientist with the Center for Biological Diversity, said. “More and more scientists are raising concerns about the effects of glyphosate on human health and the environment. With about 1.7 billion pounds of this pesticide used each year worldwide, the FDA’s data is badly needed to facilitate long-overdue conversations about how much of this chemical we should tolerate in our food.”

Leading scientists published an article about the exploding use of glyphosate around the world in yesterday’s issue of the journal Environmental Health. Pointing to concerns over rapidly increasing use, outdated science and the WHO’s finding, the authors called on regulatory agencies to take a fresh look at the real-world impacts of glyphosate and to start monitoring its levels in people and in food.

“The alarm bell is ringing loud and clear. The current cavalier use of glyphosate and lax regulation, cannot remain in place,” Donley said. “It’s long past time to start reining in the out-of-control use of this dangerous pesticide in the United States and around the world.”

Just last week 35 members of the U.S. House of Representatives sent a letter to U.S. Environmental Protection Agency (EPA) Administrator Gina McCarthy expressing concerns regarding the potential negative health and environmental impacts of a pesticide, Enlist Duo, that combines glyphosate and 2,4-D. EPA is currently reanalyzing its decision to register the dangerous pesticide following a remand order from the 9th Circuit Court of Appeals.