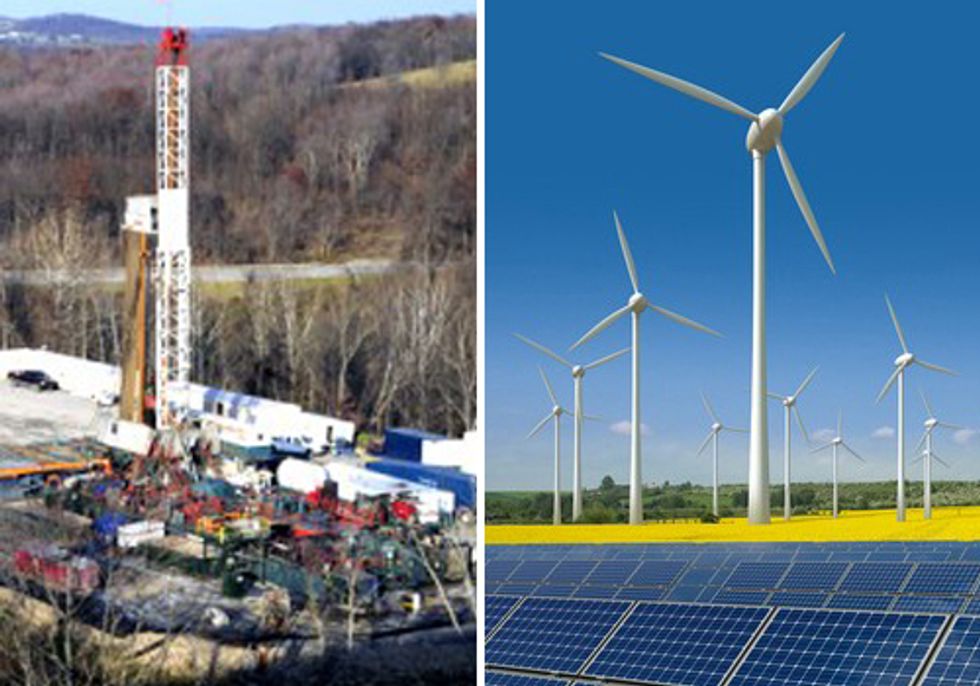 The practice of hydraulic horizontal fracturing or fracking to extract natural gas from the shale beds of the U.S. began, for all practical purposes, in 2007. Since that time, the production of natural gas within the nation has increased, gas extracted from shale beds more than making up for a decline in production from conventional sources.

And the industry has not been quiet about this growth. Hardly a day passes without some national media outlet expounding the benefits the nation will derive from this recent production “boom.” But just how real is this boom when compared with other developments within the energy industry—specifically the exponential growth of renewable energy?

In 2011, annual domestic natural gas production rose to 24,000,000 million cubic feet (growing by about 20 percent since 1995). An import fact often overlooked in discussions concerning this recent spike in production is that, while output has indeed increased, the number of gas wells needed to produce this gas has increased at a much greater rate (up about 180 percent over the same time period).

Perhaps the real story in these numbers is that the amount of natural gas per well continues to decline. A sign of an industry past its peak, with declining reserves and lower productivity.

Where has the Real growth been?

While a 20 percent growth in production over a dozen years may be considered a “boom” by some, almost ignored in the national dialogue has been the recent growth of renewable energy.

In 2012, renewable energy accounted for 55 percent of all the new domestic energy created in the U.S. For the first time in history, renewable energy (primarily wind and solar) has become the dominant electrical energy of choice within this nation.

One reason for this remarkable growth can be found in the declining price of renewable energy installations. Since 2008, the price of commercial wind turbines has declined by nearly 30 percent. In 2011,  the State Department’s Bureau of International Information Programs (IIP) published that wind power production costs had reached parity with the cost of producing electricity with coal (traditionally considered the cheapest source of electicity). And while the cost of wind power continues to decline, the cost of energy produced by coal continues to rise.

But what about Solar?

While the growth of wind energy capacity has been dramatic in recent years, it pales in comparison with its comparatively small renewable energy cousin—solar electric.

For all practical purposes, the solar industry in the U.S. is only about ten years old. Prior to 2006, just a very few early adopters had deemed it practical to install relatively small and relatively expensive solar arrays. But in recent years, the price of solar energy has fallen dramatically, and as a result, the installation of photovoltaic (PV) systems has increased in an equally dramatic fashion.

The U.S. currently has about 6,500 megawatts of installed solar capacity, enough to power more than 1 million homes. This represents a growth in generating capacity of more than 1,200 percent in just five years.

Once again, this exponential growth can be traced to declining prices. Over the past five years, the price of installed systems has been more than cut in half. And in recent years, declines in the cost of solar panels have resulted in even more dramatic price reductions.  From the third quarter of 2011 to the third quarter of 2012, the average cost of an installed PV system dropped by 33 percent, and the average price of a solar panel declined by 58 percent.

Critics argue, however, that while renewable energy growth is indeed impressive, the numbers are quite small when compared with energy derived from fossil fuels. And they are, in fact, correct. In 2011, the U.S. consumed a staggering total of 79.02 quadrillion BTUs of energy. Of this amount, only about 11 percent was obtained from renewable sources (primarily hydro and biofuels, with only about 2 percent coming from wind and solar).

However, exponential growth is a powerful force. Should the growth of wind and solar slow and  only double each year, within five years they would account for more than 50 percent of all the energy consumed within the U.S. While this dramatic growth rate seems highly unlikely, given production limitations and inherant barriers to market (hard to convert a natural gas power plant to solar just because it is a cheaper process)—should give one pause. The transition may take place much faster than most industry watchers imagine.

The Revolution is underway

Our society is poised to transform as renewable energy becomes the dominant source of power. How these transitions will manifest are anyone's guess—but they will be massive and dramatic. To be sure, we as a nation have undergone such changes before. The automobile was, at first, a silly plaything for tinkerers and the wealthy. Mobile phones were status symbols, and nothing more. It was a certainty within the industry that they could never compete with the more efficient and ubiquitous land lines.

Yet our nation changed, despite the best efforts of the powerful railroads and Ma Bell. We are in the process of changing once again.

So why all the fuss about a small bump in domestic natural gas and oil production? We need only look to politics and marketing. The fossil fuel industry is long-established, wealthy and well connected. By comparison, the renewable energy industry is a child.

In a marketplace dominated by headline stories of visible failures such as Solendra, few Americans realize that (according to the Government Accountability Office) the electricity generated by fossil fuels receives $5 in federal subsidies for every $1 received by the renewable energy industry.

In a very real sense, the only reason the fossil fuel industry can now compete with renewable energy is because of government subsidies.

My how the mighty have fallen. For more on this story, stay tuned to your local station ...