As Extreme Weather Events Increase, What Are the Risks to Wildlife? 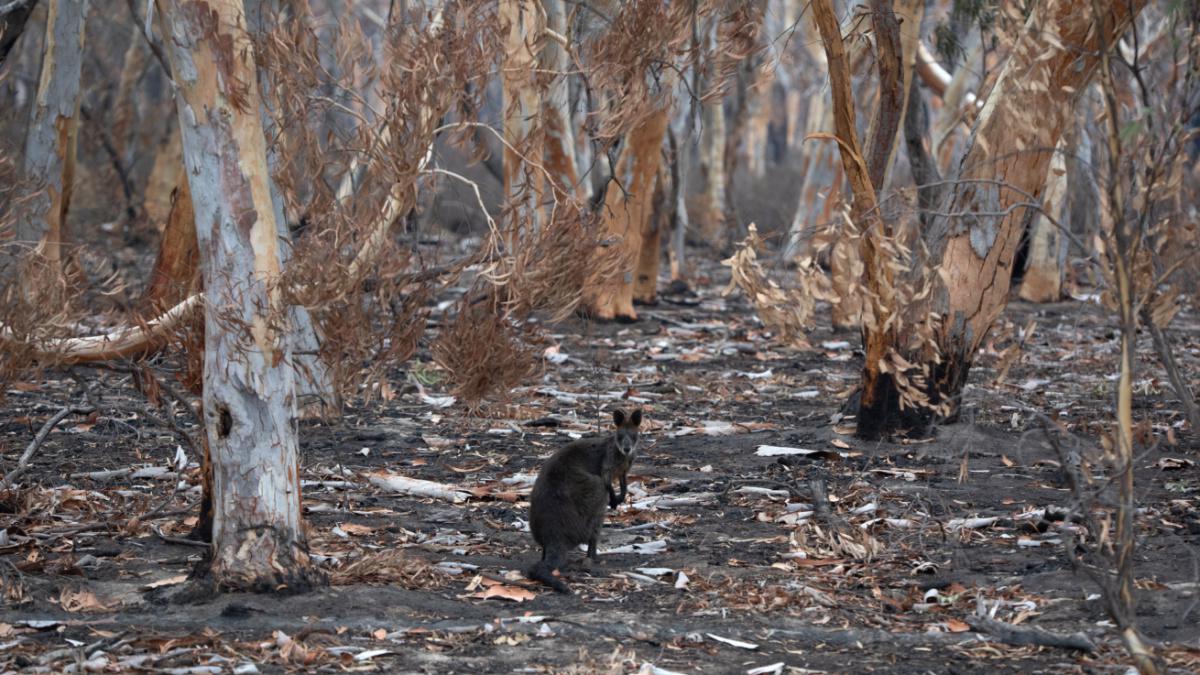 A swamp wallaby searches for food in a bushfire-scorched forest on February 3, 2020 in Braidwood, Australia. John Moore / Getty Images

A hailstorm in South Texas. Tornadoes in Tennessee. Wildfires across the West. A barrage of Gulf Coast hurricanes. Those are among the record 22 weather and climate disasters that each topped $1 billion in damages last year in the United States.

In all, the price tag for 2020 hit a whopping billion — and that’s just in the United States. Reinsurance firm Swiss Re put global economic losses at 5 billion last year, including billion for floods in China and billion in damages from Cyclone Amphan across India and Bangladesh.

The worst news? Our profligate burning of fossil fuels means we’re in store for more.

Studies show that climate change is supercharging some weather and climate events and will lead to more severe and longer-lasting heat waves, stronger hurricanes, an increased wildfire risk and a longer wildfire season. We can also expect more heavy rain events and severe droughts, not to mention other extreme events like February’s polar vortex.

“You can’t attribute any particular storm to climate change, but what we do know is that climate change tips the odds of making many of these events more severe,” says Bruce Stein, chief scientist and associate vice president at the National Wildlife Federation.

Many plants and wildlife evolved with and have adapted to dealing with large-scale disturbances, but we’re beginning to see “megadisturbances” at levels beyond what we saw in the past, says Stein.

And that can take a toll. Extreme weather can kill animals directly — or indirectly, like by destroying food sources, contaminating water or altering habitat, forcing a species to move into areas where there may be more competition, fewer resources or a greater risk of predation.

“What we begin to find when you get some of these mega disturbances is that it’s beyond the ability of a species — or their adaptive capacity — to bounce back,” says Stein.

The effects of climate change on the natural world are being felt at two speeds. One is more gradual, referred to by scientists as “ramping” — shrinking glaciers, rising sea levels. The second is quick, like extreme weather events.

Both are problematic, says Sean Maxwell, a postdoctoral research fellow at the University of Queensland’s Centre for Biodiversity and Conservation Science. But, he adds, “I think the changes to acute events have the greatest potential to devastate local populations or ecosystems, and the impacts of these events are often more difficult to plan for or avoid.”

Maxwell was the lead author of a 2018 study published in the journal Diversity and Distributions that examined how changes in the frequency and intensity of extreme weather and climate events affected wildlife. The researchers looked at 519 studies of ecological responses to extreme events — including cyclones, droughts, floods, and heat and cold waves — that took place from 1941 to 2015. They found that the response was negative 57% of the time. (And in those instances where species benefited, they were mostly invasive species.) 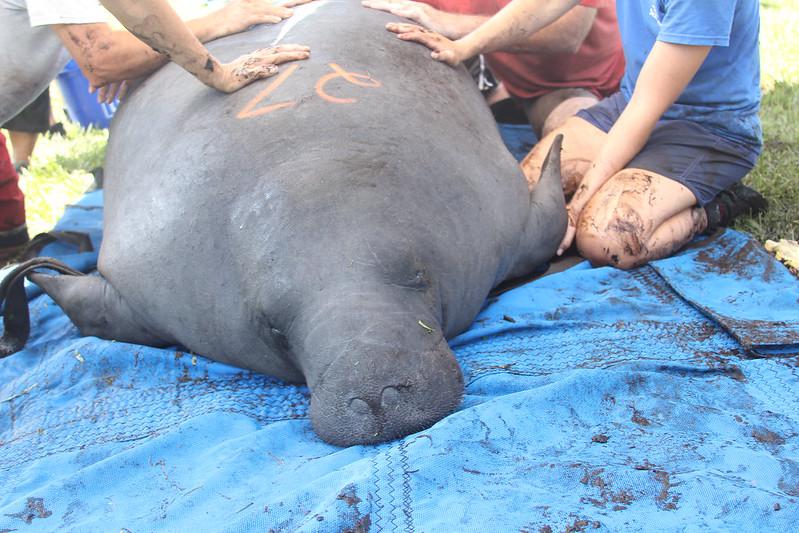 “Some of the negative responses we found were quite concerning, including more than 100 cases of dramatic population declines and 31 cases of local population extinction following an extreme event,” says Maxwell. “Populations of critically endangered bird species in Hawai’i, such as the palia, have been annihilated due to drought, and populations of lizard species have been wiped out due to cyclones in the Bahamas.”

Plant species, the researchers found, had the highest number of negative responses to extreme events, followed by reptiles and amphibians.

“Collectively, the studies in our review suggest that extreme weather and climate events have profound implications for species and ecosystem management,” the researchers concluded.

Species that are already threatened or endangered are of course especially at risk.

Take the Attwater prairie chicken. A million of these birds once ranged across the prairies of Texas and Louisiana.

Today fewer than 100 remain in the wild and scientists have sought to bolster their populations with captive breeding programs. But when Hurricane Harvey walloped Texas with 130-mile-per-hour winds and record rainfall in 2017, the birds were right in harm’s way.

Other species with limited ranges, like those on islands, also face big threats.

“If a species is well distributed, then if one part of its range gets hit, there’s the ability for it to recover,” says Stein. “But if essentially all its eggs are in one basket, and that particular place gets hit by one of these big disturbances, that’s when you have a real concern.”

In 2017 Hurricane Maria cut the population of just 200 Puerto Rican parrots in half. The year before, Hurricane Matthew was believed to have wiped out the last Bahama nuthatches (Sitta insularis). It took two years before a few of the birds were found — and then Hurricane Dorian struck in 2019, making their survival unlikely, according to Diana Bell, a professor of conservation biology at the University of East Anglia.

“In fact, Dorian may have not only sealed the fate of the nuthatch but also severely impacted other birds endemic to these islands, particularly the Bahama warbler and the Abaco parrot,” Bell wrote in an essay for The Conversation. “Also known as the Bahama Amazon parrot, this subspecies uniquely nests in limestone cavities on the ground which are likely to have been flooded by the storm surge.” 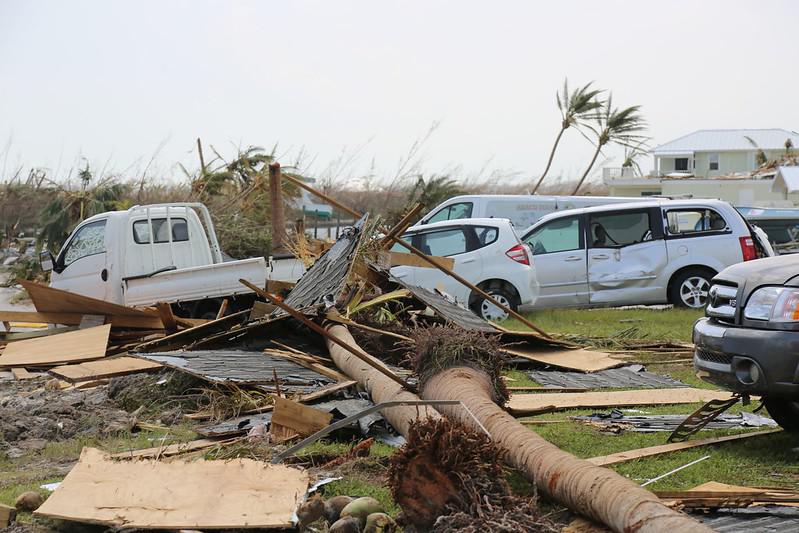 The risk to wildlife from extreme storms can be compounded by the ramping effects of climate change, too.

“If you have increasingly severe hurricanes where you’ve also got sea-level rise essentially providing a higher lodge point for the storm surge, then you start seeing impacts beyond the historical record,” says Stein.

In other places, extreme weather is an extra blow to species already struggling with other environmental pressures, like habitat loss, invasive species or pollution.

In the immediate aftermath, one expert put the death toll for wildlife at 1 billion animals lost. Since then the figure has been revised to 3 billion killed or displaced by the blazes.

A study published in Nature Ecology and Evolution found that the fire impacted the critical habitat of 832 native species, with 70 species losing more than 30% of their natural range. Twenty-one of those were already at risk of extinction.

Those that survived could find themselves hard-pressed in future climate disasters. “Multiple extreme events are likely to act in synergistic ways to exacerbate risk of species’ extinction,” wrote Maxwell and the other researchers of the 2018 study.

Australia already has one of the highest extinction rates, and the wildfires could limit the capacity of some species to recover — like the endangered Kangaroo Island dunnart and the long-footed potoroo — and threaten others. Australia’s record blazes last year could push the number of endangered species in the country up by 19%, the study in Nature Ecology and Evolution found. 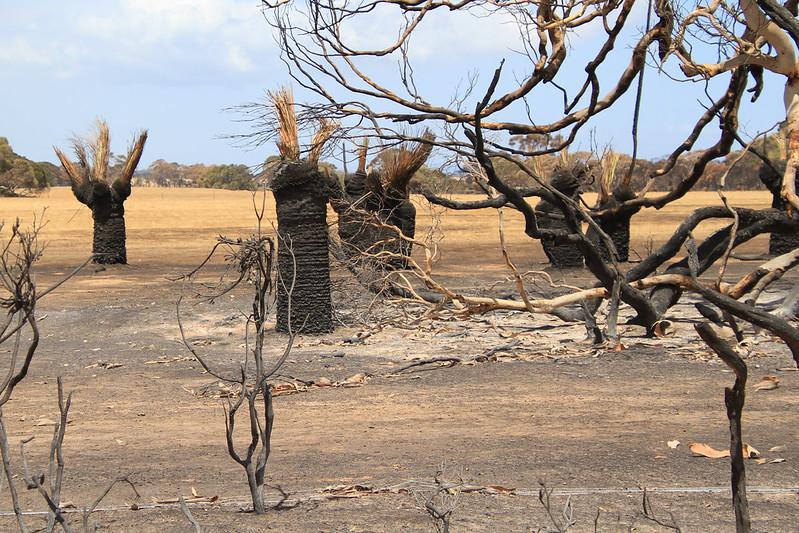 Kangaroo Island, the only habitat of the endangered Kangaroo Island dunnart, after the 2019-2020 Australia wildfires. StephenMitchell / CC BY-NC-ND 2.0

When Hurricane Irma sacked the Florida Keys in 2017, the storm tossed boats ashore, destroyed more than 1,000 homes and left a trail of debris across the islands.

It also endangered one of the region’s beloved endemic species, the tiny Key deer, which today primarily live on Big Pine Key. Some deer were killed in the storm, and surviving animals faced threats to their already limited freshwater supply as the storm surge dumped saline ocean water into freshwater pools.

Island residents responded the way folks often do after a disaster — they offered help to their neighbors.

“What you saw during and shortly after Irma is that these Key deer were coming up to houses looking for fresh water,” says Stein. “And people were putting out kiddie pools of water for them.” 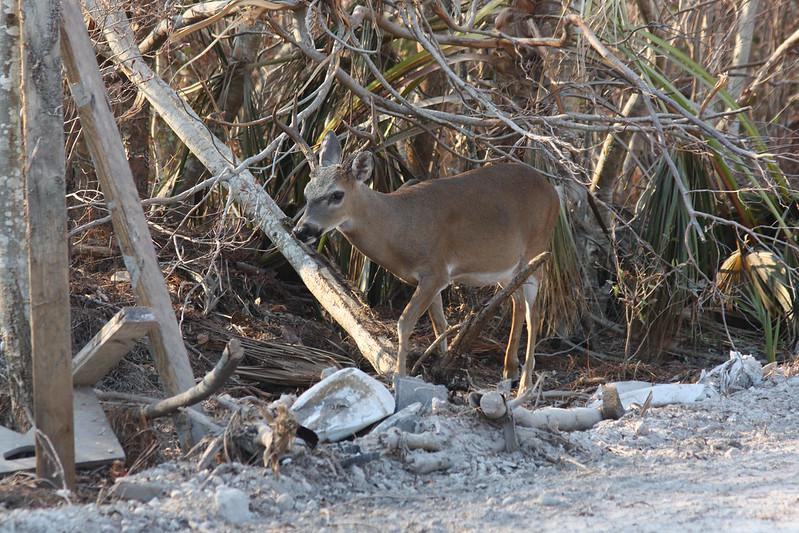 Following Australia’s bushfires last year, the country’s government jumped to the aid of wildlife by dropping 4,000 pounds of carrots and sweet potatoes to starving brush-tailed rock-wallabies who lost their food source in the blazes.

“There’s a lot of things that we can do to help human communities as well as wildlife after these acute disturbances,” says Stein.

But beyond immediate food and water relief, there’s a much bigger task ahead: reducing greenhouse gas emissions to address the ongoing dangers of climate change and the ability of ecosystems to adapt. Key deer, for example, also face a long-term threat to their drinking water supply from rising seas, something no number of kiddie pools can repair. And more severe hurricanes are likely in their future, too.

“As climate change continues to ensure extreme climate and weather events are more and more common, we now need to act to ensure species have the best chance to survive,” says Maxwell. “Wherever possible, high-quality and intact habitat areas should be retained, as these are the places where species are most resilient to increasing exposure to extreme events.”

If such intact habitat doesn’t exist, ecological restoration efforts can be used to help species adapt, his study found.

And the more we know, the better.

“Incorporating extreme events into climate change vulnerability assessments and adaptation plans will be challenging,” the researchers of the 2018 paper concluded. “But by doing so we have a greater chance of arriving at conservation interventions that truly address the full range of climate change impacts.”

And that could give more species a fighting chance in a changing climate.