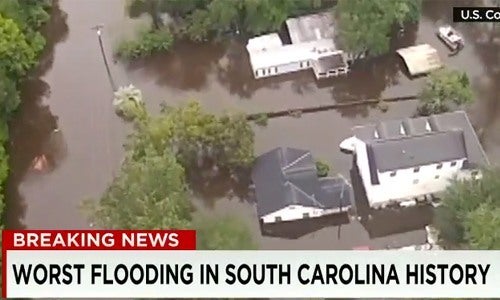 This weekend was insane for extreme weather worldwide. As the planet has warmed, severe weather events are happening in every corner of the globe, alerting us to the need for strong, immediate action on climate change.

“No particular climate event can be identified as the consequence of a rise in global average temperatures driven by the release of carbon dioxide and other greenhouse gases from the burning of fossil fuels,” according to climate scientists Erich Fischer and Reno Knutti at ETH Zurich—the Swiss Federal Institute of Technology. “But some events that were once improbable have now become statistically more probable because of global warming,”

Here are five extreme weather events that are rocking the planet:

“We haven’t seen this level of rain in the low country in a thousand years,” Gov. Nikki Haley told reporters Sunday afternoon. “That’s how big this is.”

A “1,000-year rainfall” means that the amount of rainfall in South Carolina has a 1-in-1,000 chance of happening in any given year, CNN meteorologist Taylor Ward explains.

“I’ll put it this way: For us, this is a biblical event,” said Brian Hinton, the deputy chief of the Charleston County Volunteer Rescue Squad. “This is a historical-type deal.”

At least eight are confirmed dead, and hundreds had to be rescued. “An agonizingly powerful blend of a low-pressure system and some of the moisture from Hurricane Joaquin as it spun over the Atlantic Ocean toward Bermuda, was expected to last into the week, raising fears that conditions could worsen,” reports The New York Times.

“The Charleston region appears to be among the worst-hit so far, though heavy rain is falling across much of the Southeast, from the northern Atlanta suburbs to North Carolina,” says Slate. “More than a foot of rain has already fallen in Charleston since the downpour began on Thursday, and much more is on the way. By 8 a.m. Saturday, Charleston had already broken its daily rainfall record of 3.28 inches, set in 1994. By Saturday afternoon, it had doubled the previous record.”

2.  “Apocalyptic” Scenes in the South of France

Violent storms and flooding on the French Riviera have killed at least 17 http://t.co/VacUnjwieI pic.twitter.com/e7UEbFThzP

The southeastern U.S. wasn’t the only place dealing with flooding. “Four people were still missing on Monday after flash floods on the French Riviera killed at least 17 people over the weekend, prompting the government to declare a natural disaster in the southeastern tourist region,” reports Reuters.

Violent storms and torrential rain struck the area in what were described as “apocalyptic” scenes, says AFP. An estimated 5,000 homes were still without power this morning after as many as 70,000 suffered power outages on Sunday evening.