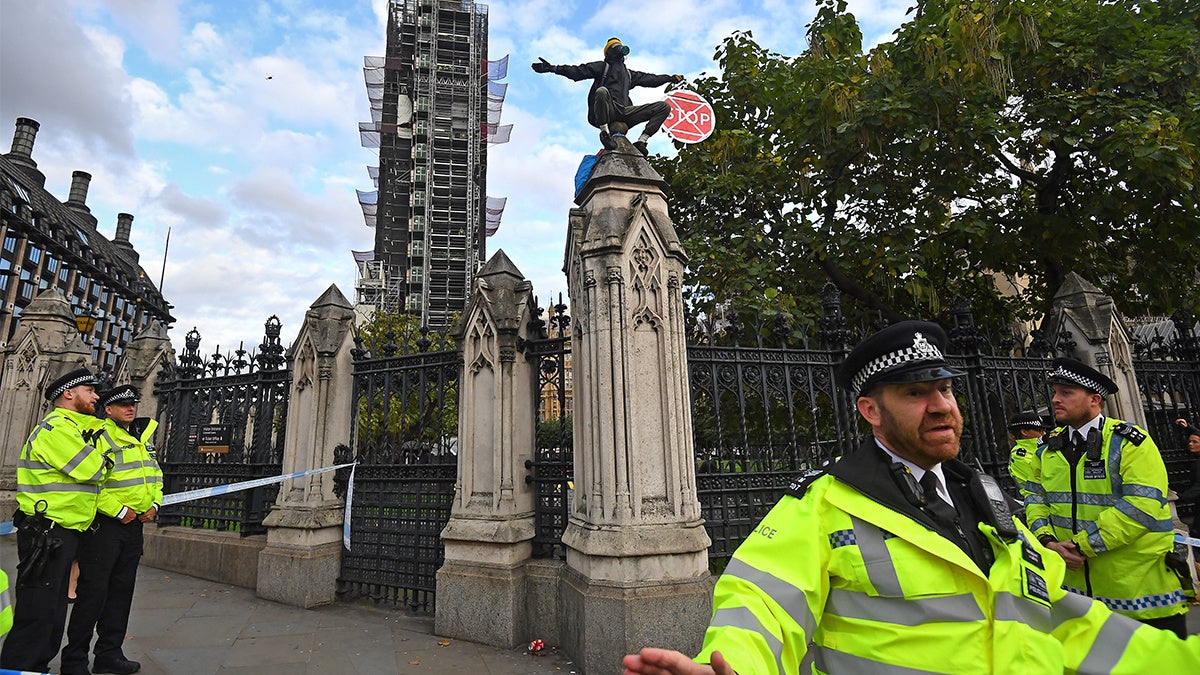 An Extinction Rebellion protester sits on fence pillar at the houses of parliament in London on Oct. 15. Victoria Jones / PA Images via Getty Images

The police imposed the ban Oct. 14 for the last four days of Extinction Rebellion’s two-week “Autumn Uprising,” a campaign of civil disobedience in London intended to pressure the government into action on the climate crisis.

“Extinction Rebellion is delighted with the Court’s decision,” Tobias Garnett, a human rights lawyer in Extinction Rebellion’s Legal Strategy team, said in an Extinction Rebellion press release. “It vindicates our belief that the Police’s blanket ban on our protests was an unprecedented and unlawful infringement on the right to protest. Rather than wasting its time and money seeking to silence and criminalise those who are drawing its attention to the Climate and Ecological Emergency, we call on the Government to act now on the biggest threat to our planet.”

More than 400 @XRebellionUK activists unlawfully arrested for assembling (a human right) could sue the Met Police for false imprisonment after high court ruling that the #London wide blanket ban on XR #climateprotest was unlawful. 1800+ arrested in total during October rebellion pic.twitter.com/YUj84nzVgM

The police had issued the ban under Section 14 of the Public Order Act of 1986, which grants them the power to impose restrictions on assemblies that “may result in serious public disorder.” But the court ruled that the police had overstepped their authority by banning a series of protests as if they were a single assembly.

“Separate gatherings, separated both in time and by many miles, even if coordinated under the umbrella of one body, are not a public assembly within the meaning of the Section 14 of the 1986 Act,” Lord Justice Digemans said, according to CNN. “The XR autumn uprising intended to be held from October 14 to 19 was not therefore a public assembly … therefore the decision to impose the condition was unlawful because there was no power to impose it under Section 14 of the 1986 Act.”

Here is the crucial section of the judgement: pic.twitter.com/LxNJsE8YQc

Anyone who was arrested under the ban may now sue the London police for false imprisonment, The Guardian pointed out.

“It’s a very expensive mistake for the Metropolitan police,” Jules Carey, part of the legal team that brought the case, told The Guardian. “I’m sure most of them would want to start off with an apology for the ordeal that they experienced, but all of them could potentially be awarded several thousands of pounds depending on how long they were arrested for and whether force was used against them.”

Chowns, a Member of European Parliament who was arrested for remaining in Trafalgar Square after the ban was announced, applauded the ruling.

“I’m delighted with this judgement because this is about fundamental democratic rights. The right to assembly and public protest are cornerstones of a functioning democracy,” she said in a video shared on her Twitter feed. “Now Extinction Rebellion protesters have been raising the alarm about the climate crisis. We need to listen to that alarm, not outlaw it.”

In Trafalgar Square at the place where I was unlawfully arrested three weeks ago for defending the right to protest. Politicians need to listen to the ⁦@XRebellionUK⁩ alarm, not outlaw it. #ClimateEmergency #ClimateElection pic.twitter.com/qxfh5z05ei

Extinction Rebellion launched in the UK in late October of last year and has since spread worldwide. In the UK, the group has three demands: that the government declare a climate emergency, that it act to halt biodiversity loss and achieve carbon neutrality by 2025 and that it convene a Citizens’ Assembly to guide its actions on the environment.

The group’s London demonstrations in October cost the police million, according to CNN. For comparison, the police spend £15 million (approximately million) on their violent crime task force every year.

In court, it was revealed that the police ban followed an online message from Extinction Rebellion urging protesters to adopt the “be water” tactics used by demonstrators in Hong Kong, BBC News reported.

“Be water, crowds split up into fast moving groups and pairs, that network via phones,” the message said. “You gather at particular spots in large numbers, until the police response building then you move to a new disruptive site.”

BBC home affairs correspondent Daniel Sandford said the ruling would make it hard for the police to control similar protests in the future:

Today’s High Court ruling takes away from officers the ability to impose a city-wide ban of future protests, which means demonstrators wanting to be “like water” – where they split into fast-moving groups – will be difficult to control if they are trying to disrupt a whole city.

So police will have to deal with what is in front of them.

If a specific protest in a specific place gets out of hand they will be able to close it down, but it will have to be a decision made by an officer on the spot, and not by someone sitting in a police station worrying about what protests may happen the next day.