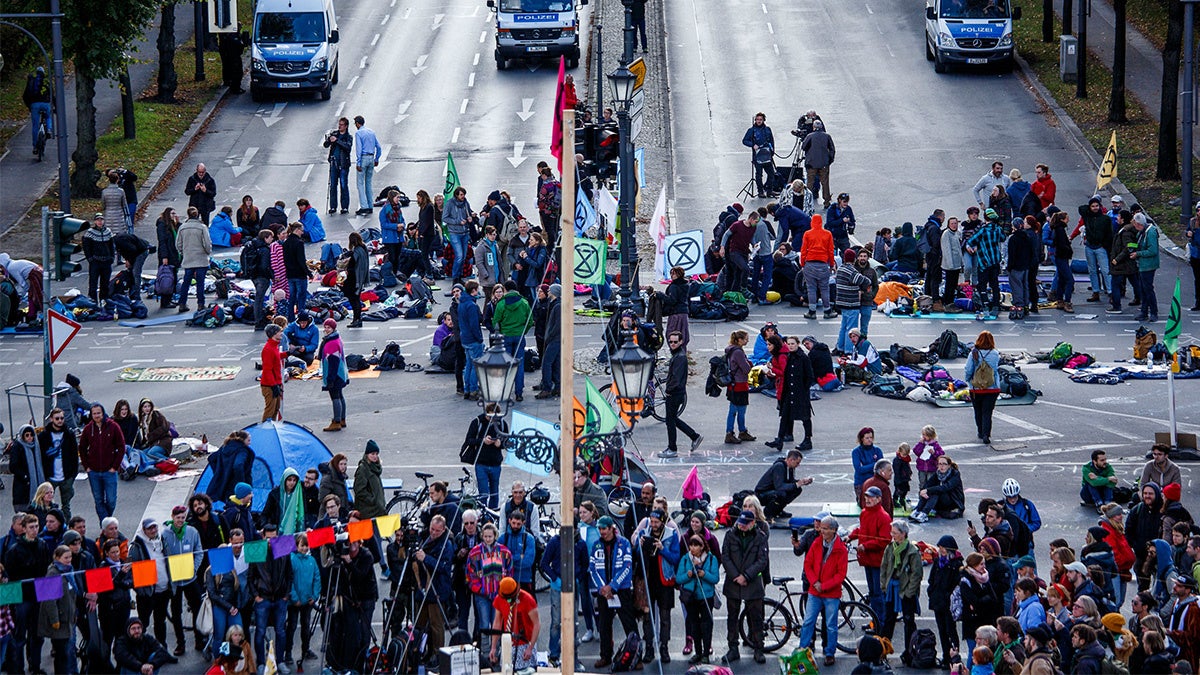 Extinction Rebellion activists occupy the roadway at the Great Star around the Victory Column on Oct. 7 in Berlin. Carsten Koall / picture alliance via Getty Images

Climate activists from Extinction Rebellion (XR) blocked roads around Berlin’s Victory Column near the Brandenburg Gate early on Monday morning as the first wave of demonstrations in a day of “civil disobedience” got underway in the German capital.

The climate movement delivered a series of tweets documenting proceedings in Berlin.

XR said: “The sun is rising and at the Victory Column 1000 rebels are finally demanding serious measures from our government in the fight against the #Klimakrise! (climate crisis)”

“We all share an interest in climate protection, and the Paris climate targets are our standard in this,” he told ZDF television. “If you demonstrate against or for that, that is ok, but if you announce dangerous interventions in road traffic or things like this, of course that is just not on.”

Meanwhile, Berlin police appealed to motorists to exercise caution and avoid the obstructed streets. “Please be careful and make a detour around the area,” police said after a number of protesters blockaded the Big Star roundabout in the central Tiergarten park.

Some 60 events were planned around the world on Monday and in Germany they were keen to kick off proceedings early. Protesters had already set up a camp over the weekend in front of Chancellor Merkel’s office and the Reichstag. Extinction Rebellion made their presence felt in Berlin, setting up camp in front of the Reichstag over the weekend.

Police said 135 people had been arrested by 12:30 (1130 UTC) in London on Monday, in addition to seven people being arrested the previous day “on suspicion of conspiracy to cause public nuisance” after the kick-off ceremony near Marble Arch in the city-center.

XR, which originates in the UK, promised a protest “five times larger” than the massive one it held in the British capital in April.

Police arrested 50 activists who blocked a major street in Amsterdam’s city center. They were detained after ignoring instructions to move their demonstration onto a nearby square.

Traffic was severely disrupted as almost 1,000 protesters huddled together on Stadhouderskade, in front of the Netherlands’ national museum.

Activists with XR kicked off the international day of protest with demonstrations across Australia and New Zealand.

In Sydney authorities confirmed 30 people were arrested as they refused police orders to clear the road near Central Station. “Alleged offenses committed range from obstructing traffic to disobey reasonable direction,” police said in a statement.

Protests also took place in Melbourne and Canberra. In New Zealand, the demonstrations began in Wellington’s central business district and on the steps of parliament. Thirty people were also arrested in the New Zealand capital, all of whom were released without charge

“Either we make history, or we’re history,” said Melanie Vautier, a university student who took part in the Wellington protests. “That means we must draw the line on fossil fuels before it’s too late.”

However, the protests were not only led by the young. The New Zealand protests were led by the 80-year-old Mary Rose, who said that “as a great grandmother, I’m determined to help wake up the world, so my grandchildren have the same choices as their parents.”