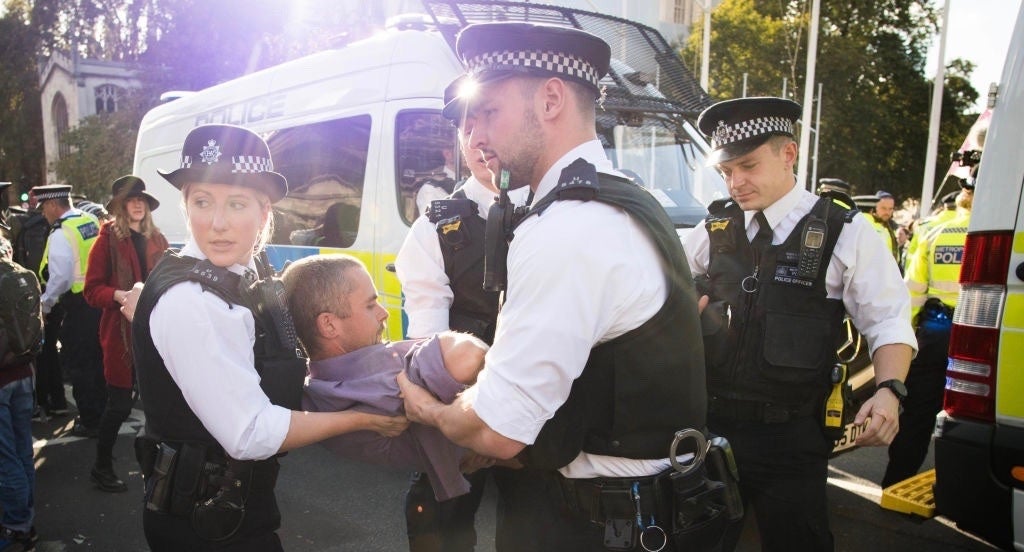 The newly formed group Extinction Rebellion seeks to push the UK government to declare a state of emergency, work towards a carbon free economy by 2025 and convene an assembly of ordinary citizens to plan out the country’s carbon-free future. The group’s message has caught on in the wake of increasingly dire reports about the pace of climate change. Organizers had expected a few hundred to show up to the opening salvo near the seat of UK government. Instead, more than a thousand came and decided to block one of London’s busiest intersections for more than two hours.

“The disruption we are causing today is nothing to the destruction that our governments are unleashing by not taking serious steps to stop the ecological crisis,” 28-year-old demonstrator Felix told The Guardian. “I have never been to prison before but I feel I have to try and do something.”

We understand that all 15 arrestees were eventually released without charge yesterday. Thank you to those who stood up (or lay down) and were prepared to make that sacrifice. We will need many more to do this to instigate change #ExtinctionRebellion

In total, 15 people were arrested Wednesday, then released without charge, but the group says hundreds of members are prepared to go to prison in a series of escalating demonstrations in London next month that will build towards a sit-in in Parliament Square November 17 and occupations of various London bridges.

“People are no longer prepared to sit back and watch our politicians and corporations drive us off the cliff of ecological destruction,” organizer Gail Bradbrook told The Guardian. “This is an emergency situation and it needs an emergency response.”

The group read out their Declaration of Rebellion against the government’s lack of adequate action on climate change.

The DECLARATION OF REBELLION against the criminal inaction of the UK government on #ClimateBreakdown has just been made.#ExtinctionRebellion pic.twitter.com/g81w0DL3Dv

The group hopes to inspire people around the world to take similar actions, but feels a responsibility to act in the UK, where the industrial revolution first began.

Calling rebels from around the world! Let's make #extinctionrebellion go international, get in contact. Here is the international call in various languages:https://t.co/gd16EuSCiu

For those who can make it to London the week of November 15, the group has posted a video online called “Heading for Extinction and What to Do About it” and is holding civil disobedience trainings in London November 10 and 11.

Heading for extinction and what to do about it