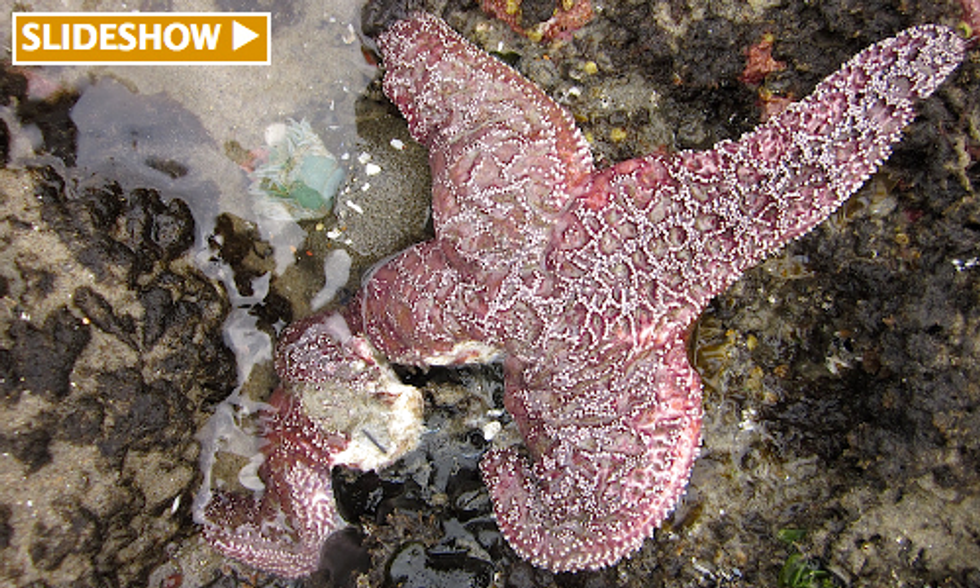 Just in the past two weeks, the incidence of sea star wasting syndrome has exploded along the Oregon Coast and created an epidemic of historic magnitude, one that threatens to decimate the entire population of purple ochre sea stars.

Prior to this, Oregon had been the only part of the West Coast that had been largely spared this devastating disease.

The ochre sea star, which is the species most heavily affected by the disease in the intertidal zone, may be headed toward localized extinction in Oregon, according to researchers at Oregon State University (OSU) who have been monitoring the outbreak. As a “keystone” predator, its loss could disrupt the entire marine intertidal ecosystem.

Researchers say this is the first time that die-offs of sea stars, more commonly known as starfish, have ever been identified at one time along such a wide expanse of the West Coast, and the sudden increase in Oregon has been extraordinary.

The best information is from the intertidal zone, which is easier to access for monitoring. In this area, less than one percent of the ochre sea stars in Oregon were affected in April, and only slightly more than that by mid-May.

Today, an estimated 30-50 percent of the Oregon populations of this sea star species in the intertidal zone have the disease. The highest losses are at Fogarty Creek, where about 60 percent are affected. Researchers project that the epidemic will intensify and, at some sites, nearly 100 percent of the ochre sea stars could die.

“This is an unprecedented event,” said Bruce Menge, the Wayne and Gladys Valley Professor of Marine Biology in the Department of Integrative Biology of the OSU College of Science. “We’ve never seen anything of this magnitude before."

“We have no clue what’s causing this epidemic, how severe the damage might be or how long that damage might last,” Menge said. “It’s very serious. Some of the sea stars most heavily affected are keystone predators that influence the whole diversity of life in the intertidal zone.”

Colleagues from the Oregon Coast Aquarium are monitoring subtidal sites in Yaquina Bay, where wasting was first observed in April.

Altogether, mortality has been documented in 10 species of sea stars on the West Coast. No definitive cause has yet been identified, and it could include bacterial or viral pathogens. Researchers around the nation are working on the issue.

Sea star wasting syndrome is a traumatic process in which, over the course of a week or less, the sea stars begin to lose legs, disintegrate, ultimately die and rot. They sometimes physically tear their bodies apart. Various epidemics of the syndrome have been observed in the past, but none of this extent or severity.

In a healthy ecosystem, sea stars are beautiful, but also tenacious and important parts of the marine ecosystem. In particular, they attack mussels and keep their populations under control. Absent enough sea stars, mussel populations can explode, covering up algae and other small invertebrates. Some affected sea stars also eat sea urchins. This could lead to increased numbers of sea urchins that can overgraze kelp and sea grass beds, reducing habitat for other fish that use such areas for food and refuge.

The very ecological concept of “keystone predators,” in fact, originated from work in 1969 at the University of Washington using this same purple ochre sea star as a model.

“Parts of California, Washington and British Columbia had already been affected by this outbreak of the wasting syndrome,” said Kristen Milligan, program coordinator at OSU for the Partnership for Interdisciplinary Studies of Coastal Oceans (PISCO), which is a collaboration of OSU, the University of California-Santa Cruz, UC-Santa Barbara and Stanford University.

“It wasn’t clear why those areas had been hit and Oregon had not,” Milligan said. “We were hoping that Oregon’s coast would be spared. Although it was hit late, we are obviously being hit hard by this potentially devastating syndrome.”

A group of OSU undergraduate students have assisted in recent monitoring of the OSU outbreak, studying conditions at 10 sites from south of Cape Blanco to north of Depoe Bay. Researchers say this is one of the best documented outbreaks of marine disease ever undertaken in North America.

Besides OSU and PISCO, other collaborators in this Oregon initiative include the Oregon Department of Fish and Wildlife, the Oregon Coast Aquarium, OSU Hatfield Marine Science Center, Oregon Coast Watch, Haystack Rock Awareness Program in Cannon Beach and the Multi-Agency Rocky Intertidal Network. Oregon Sea Grant provides funding for volunteer surveys in the intertidal zone, and the David and Lucile Packard Foundation provides support to PISCO.

In some past cases, ecosystems have recovered from severe losses of sea stars, but in others damage has been long-lasting.

In the past, some of the outbreaks were associated with warm-water conditions during El Nino events, but currently the water temperatures in Oregon “are only at the high end of a normal range,” Menge said.