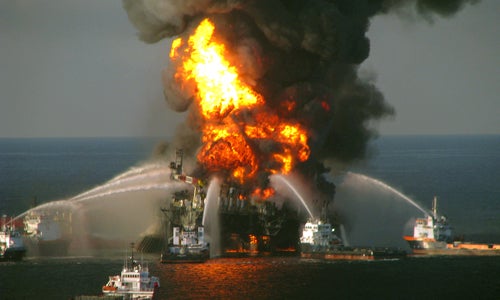 Today is the fourth anniversary of the Deepwater Horizon explosion, which killed 11 workers and dumped more than 4.9 million barrels of oil into the Gulf of Mexico over a three month period in 2010. 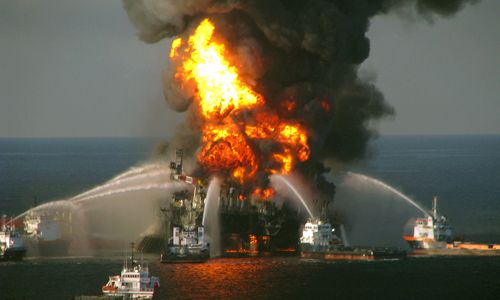 BP’s critics say that the Deepwater Horizon disaster and other accidents were not just a run of bad luck, but the result of an ingrained corporate culture which routinely put profits above safety.

You wouldn’t think that the London-based company that spilled the oil would get an anniversary gift from the federal government. But the U.S. Environmental Protection Agency (EPA) has just given BP a big one. The EPA ruled that the corporation could start bidding on lucrative new oil leases in the Gulf of Mexico after having been suspended from doing any new business with the government ever since the accident.

That suspension was lifted on March 13 less than a week before the yearly government auction for drilling rights. The company whose negligence was responsible for the worst marine oil-spill in history won 43 new leases in the Gulf that is still fouled by million of gallons of unrecovered crude.

The Deepwater Horizon disaster was not the first time that BP was found culpable in a major accident. In 2005 the company was deemed criminally liable for a refinery explosion in Texas City which killed 15 people. Yet again in 2006, a Justice Department investigation found that BP had willfully ignored evidence of serious corrosion in its pipeline, which led in Alaska to the largest oil spill ever in the Arctic.

BP’s critics say this was not just a run of bad luck, but the result of an ingrained corporate culture which routinely put profits above safety. In an interview, Tyson Slocum of the public interest group Public Citizen said: “If ordinary people are found guilty in three felony cases, they will be imprisoned—suspension from contracts is a kind of corporate imprisonment.”

However, under intense pressure from BP, which filed a lawsuit challenging the contract ban, and the British government, which filed a brief in the case criticizing the U.S. for its action, the company was just granted a get out of jail free card by the Obama administration.

Perhaps not coincidentally, the head of the EPA suspension and debarment office which ordered the original ban against the oil giant, “retired” just days after the administration caved to BP’s demand to end their 5-year criminal probation period early.

After the Gulf oil spill, there were calls in the environmental community and in Congress to reform the outdated regulatory system. “The last time that regulations for offshore drilling were written,” says Slocum “was 1978. Deepwater wells, like the Deepwater Horizon were introduced in 1994. So what you’ve got is regulations for the typewriter age applying to iPhones.”

In the aftermath of the disaster, Congress passed a bill in the summer of 2010 which called for a comprehensive reorganization of the Offshore Oil Agency, and for tougher new environmental standards. But, under pressure from the American Petroleum Institute that bill died in the Senate.

The Obama administration then took matters into its own hands calling for a temporary moratorium on drilling. By executive decree, the President reintroduced many of the same rules that had been included in the ill-fated bill. These rules, however, do not have the force of law and can be reversed by future administrations.

Moreover, the central problem, according to Slocum, remains: “Remember, we all watched in horror over a period of two and a half months how one of the largest and most profitable multinationals on the planet with some of the smartest engineers in the world had absolutely no idea how to cap that well … We still do not have clear certification that any driller—whether they be BP or Exxon or Shell—has the right equipment and the proven technology to stop a deepwater blowout.”

Slocum says drillers need to be required by law to have equipment on hand to drill a relief well in case of a future blowout. And we also need to require companies to thoroughly test in advance critical equipment—like the faulty blowout protector which malfunctioned to cause the Deepwater Horizon accident.