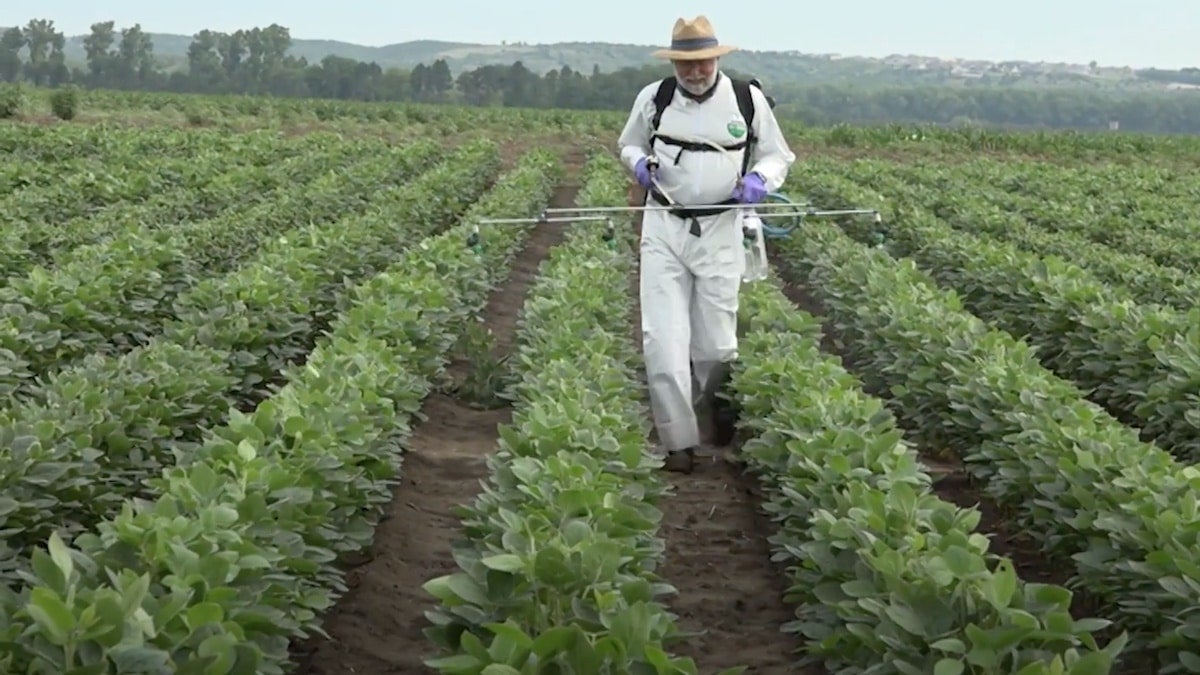 A K-State weed specialist researches the impact of dicamba drift on non-resistant soybeans in 2018. K-State Research and Extension / YouTube

The Environmental Protection Agency (EPA) approved the use of products containing the weedkiller dicamba for use on cotton and soybeans Tuesday. The EPA announcement means that two products that contain the herbicide found to cause cancer can be registered for five years. It also extended the use of a third product that also has dicamba in it, according to The Hill.

The EPA said that two canceled dicamba herbicides — XtendiMax and Engenia — will now have a five-year registration. The same five-year extension was granted to the herbicide Tavium. The EPA argued that it provides relief to farmers who were unsure how they would treat their dicamba-resistant cotton and soybean crops.

“With today’s decision, farmers now have the certainty they need to make plans for their 2021 growing season,” said EPA Administrator Andrew Wheeler in a statement. “After reviewing substantial amounts of new information, conducting scientific assessments based on the best available science, and carefully considering input from stakeholders we have reached a resolution that is good for our farmers and our environment.”

The new rules around the three products are meant to address the concerns of the Ninth Circuit Court of Appeals, which struck down a 2018 registration of dicamba products, stating that the EPA “substantially understated” some of the risks associated with the chemical’s use, as The Hill reported.

Also, a study earlier this year published in the International Journal of Epidemiology found that the chemical was linked to increased rates of liver and bile duct cancer.

The EPA’s new rules seek to mitigate the risk by increasing the required downwind buffer from 110 feet to 240 feet, and up to 310 feet in areas where endangered species are located. States can still impose their own restrictions on the herbicide, but they will have to work with the EPA and file the appropriate requests, according to the EPA’s statement.

“The economic damage that would result from not being able to use dicamba herbicides would be tremendous,” said Ken Fountain, National Cotton Council chairman, as Ag Web reported. “We greatly appreciate EPA’s timely issuance of a new five-year label for the critical crop protection product for cotton farmers.”

Environmentalists and consumer advocacy organizations were predictably appalled by the decision that seems to be an end-run around the court’s decision.

“Rather than evaluating the significant costs of dicamba drift as the 9th Circuit told them the law required, EPA rushed re-approval as a political prop just before the election, sentencing farmers and the environment to another five years of unacceptable damage,” said George Kimbrell, legal director at the Center for Food Safety, according to Ag Web. “Center for Food Safety will most certainly challenge these unlawful approvals.”

Other critics noted the damage already caused by dicamba use.

“Given EPA-approved versions of dicamba have already damaged millions of U.S. acres of crops and natural areas there’s no reason to trust that the agency got it right this time,” said Nathan Donley, a senior scientist at the Center for Biological Diversity, in a statement, as The Hill reported.

“At this point, the EPA has shown such callous indifference to the damage dicamba has caused to farmers and wildlife alike, and has been so desperate to appease the pesticide industry, it has zero credibility when it comes to pesticide safety,” Donley added.