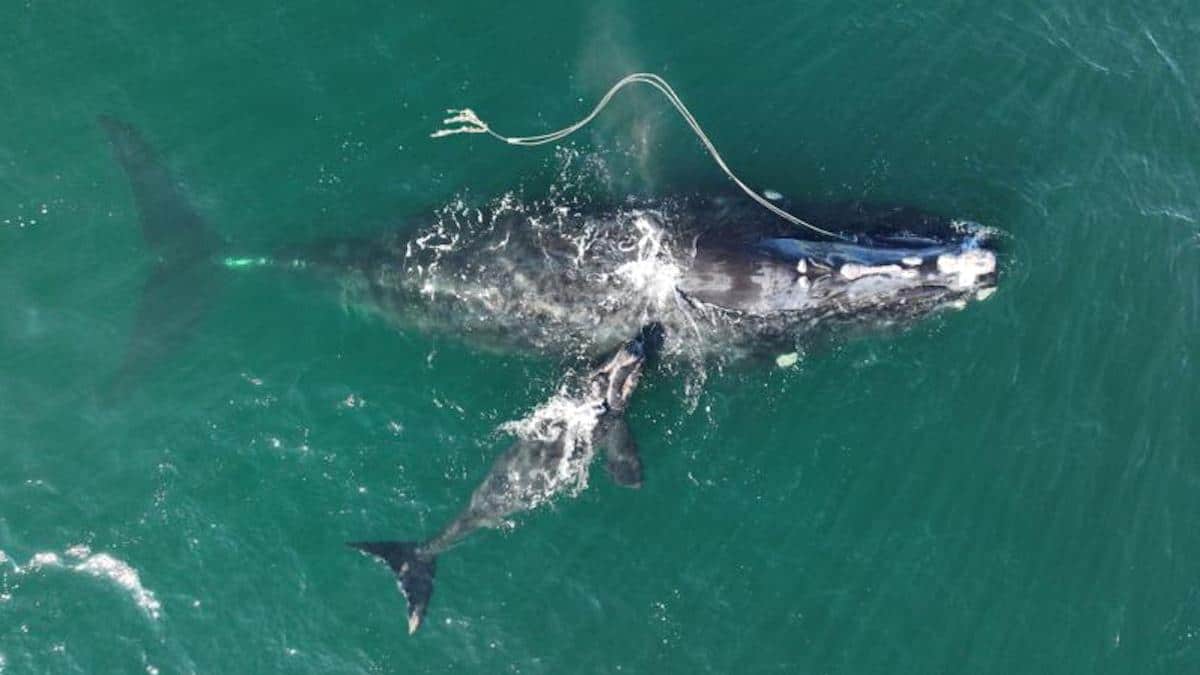 A critically endangered North Atlantic right whale managed to give birth to a calf while entangled in fishing gear.

The 17-year-old female, named Snow Cone, was spotted December 2 with her new calf off of Cumberland Island, Georgia by an aerial survey team with the Florida Fish and Wildlife Commission, as the National Oceanic and Atmospheric Administration (NOAA) announced.

“We haven’t seen a chronically entangled whale come down here from up north and have a calf,” Georgia Department of Natural Resources wildlife biologist Clay George told The AP of the incident. “It’s amazing. But on the other hand, it could ultimately be a death sentence for her.”

Snow Cone’s story exemplifies many of the threats facing North Atlantic right whales, which are currently undergoing an Unusual Mortality Event, primarily because of vessel strikes and fishing gear entanglements. Since 2017, 50 known whales have died or suffered serious injuries, but NOAA estimates that only around one third of the deaths are actually documented. During that time, only 42 new calves have been born, and there are now fewer than 350 of the critically endangered whales left.

Snow Cone lost her first known calf to two vessel strikes in June of 2020, according to NOAA. She was then seen stuck in fishing gear near Plymouth Harbor, Massachusetts on March 10, 2021. The gear was attached to her mouth. Rescuers managed to free her from nearly 300 feet of rope that she was dragging before she dove too deep to allow further disentanglement.

On May 10 and 11, Canadian rescuers managed to free her from more of the rope when she was spotted near New Brunswick, Canada. That left her with one piece of line trailing her tail and another trailing her tailstock. All told, she has carried the gear with her for more than 1,300 miles as she completed her summer migration to Canada and then returned to the whales’ calving area off the U.S. Southeast coast in the fall.

After she was spotted with her new calf, the Georgia Department of Natural Resources decided it would not be safe to remove more of the gear while she is next to her calf.

Right now, the calf appears healthy and is not caught in the rope, HuffPost reported. However, scientists are concerned that the baby could become entangled as well.

“My concern is she’s still got two pieces of rope, about 20 feet, coming out from the left side of her mouth,” George told The AP. “If those two pieces of rope ended up getting knotted around each other and there’s a loop, you could imagine that calf could end up becoming entangled.”

Experts are also worried about the health of the mother.

“Entanglement alone is a costly energetic drain and so is nursing a calf,” Barb Zoodsma, large whale recovery coordinator at NOAA Fisheries’ Southeast Regional Office, said in the NOAA report. “The severity of her mouth and head injuries are also disconcerting. For these reasons, Snow Cone may be facing her biggest challenge yet in the upcoming months. But while there are a lot of unknowns for Snow Cone and her calf, there is one clear known… If we lose Snow Cone, we lose all her future calves as well.”

This would be bad news for the whales, since they are dying faster than they can reproduce. Snow Cone’s calf is the second known birth during the 2020-2021 calving season and the delivery marks the second time a calf was found near an entangled mother, The AP reported. That mother eventually managed to free herself.

While Snow Cone is in a vulnerable position, there is still hope, seeing as she has endured through the loss of one calf and managed to give birth under difficult circumstances.