Employees Are Fighting for a New Cause at Work: The Climate 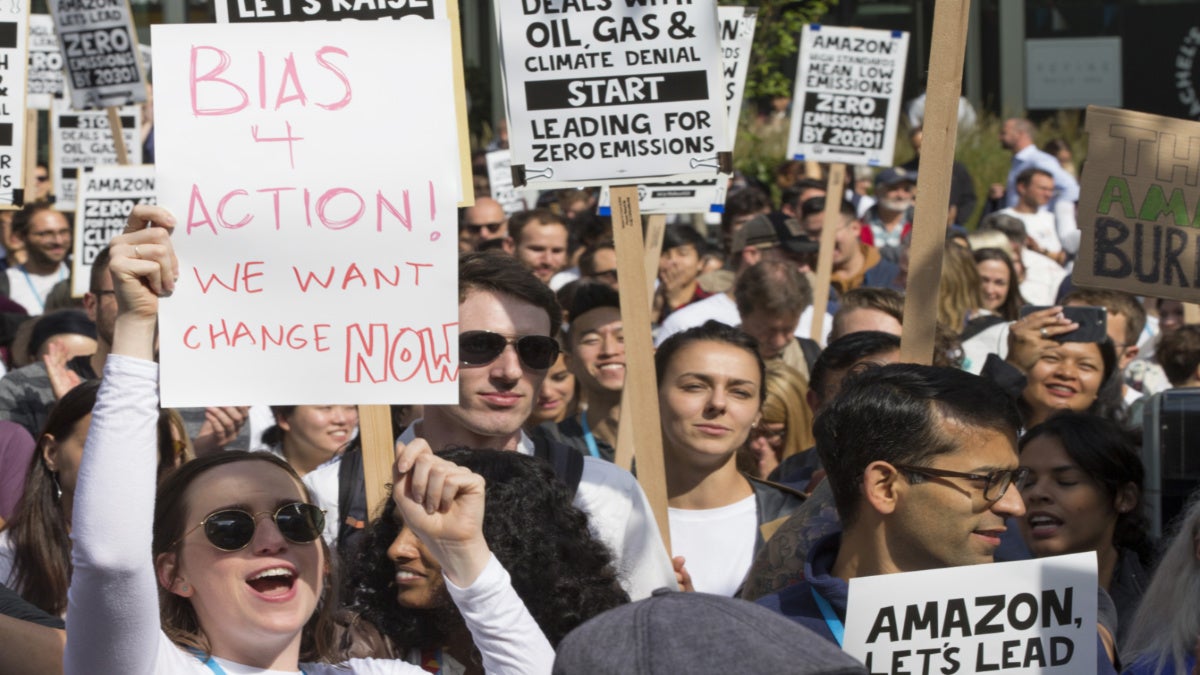 Amazon and other tech employees walk out during the Global Climate Strike on September 20, 2019 in Seattle, Washington. Karen Ducey / Getty Images

At the end of February, thousands of cleaning workers in Minneapolis marched in what’s believed to have been the first union-authorized climate strike in the United States. The protesters, many of them immigrants and people of color who have seen their communities harmed by everything from air pollution to drought, wanted their employers to take action on climate change.

Employed by more than a dozen subcontractors, these workers clean corporate buildings that are home to major companies like Wells Fargo and United Health Group. Their demands ranged from a guarantee of more environmentally friendly cleaning products to funding for a “green technician janitorial training program,” which could help them push for more substantial changes during their day-to-day operations rather than wait for top-down measures.

Employee activists like those in Minneapolis are on the rise. And unlike the traditional union focus on better pay, benefits and working conditions, they’re pushing for something even bigger ― for companies to align with their values when it comes to one of the world’s biggest issues. Namely, climate change.

As public concern about global warming has risen, companies had already come under pressure from investors, shareholders and consumers to adopt more ambitious climate-related targets for their operations and products. But now that pressure is also coming from within. A recent survey of 375 global executives found that 4 out of 5 companies expect an “unprecedented rise in workplace activism” over the next three to five years ― with sustainability and climate change an increasing concern.

While strikes and walkouts may still be the most high-profile forms of employee protest, workers are also taking their efforts online and connecting with those in other departments to amplify their voices. In November, thousands of Google employees signed a letter circulated online demanding that the company take more aggressive action on climate change.

Physical protests with signs and chanting workers are obviously not wise during the COVID-19 crisis ― and more immediate concerns like health and job security are likely taking priority ― but employees’ climate demands have not disappeared.

“I don’t think [the coronavirus pandemic] will halt employee activism. Not being prepared for a major crisis like COVID-19 has demonstrated how ill-prepared we will be for extreme weather events due to climate change,” said David Levine, co-founder and president of the American Sustainable Business Council.

Climate activists and advocacy organizations hope this new wave of activism from inside companies, driven largely by millennials, could be the key to getting businesses to do more than just “green” their operations. It could force companies to support ― rather than oppose ― serious government action on climate change or else risk losing valuable employees.

“We need companies to be really ambitious in what they’re doing in their operations. And we need employees to push them to be more ambitious in that work,” said Bill Weihl, a former Facebook and Google sustainability executive who now runs the nonprofit advocacy group ClimateVoice, which pushes companies to go “all in” on climate change issues.

“But the thing that we really need them to step up and do,” Weihl said, “is add their voice on the side of science-based climate policy everywhere.”

Advocates like Levine and Weihl argue that in the absence of U.S. leadership on the federal level, companies need to step to the front on climate change.

In 2015, nations agreed to limit temperature rise this century to below 2 degrees Celsius (3.6 degrees Fahrenheit) under the Paris climate accord. Since then, the number of Fortune 500 companies pledging to reduce their carbon emissions has quadrupled, according to a 2019 report from the consultancy firm Natural Capital Partners ― with employee demands identified as a key driver behind much of this corporate action.

But according to Weihl, the companies leading on climate tend to focus on their own operations, while remaining almost entirely silent on the bigger public policy changes that are needed. There is a political risk in speaking out. Without public policy changes, however, “we are not going to decarbonize anywhere near fast enough,” he said. And if other companies don’t get involved, Weihl added, “that means the energy companies that are pushing in the wrong direction will continue to dominate the discussion.”

Over the next decade ― the timeframe that the U.N. Intergovernmental Panel on Climate Change says is crucial for avoiding catastrophic global warming ― corporate action will need to focus not only on operational measures like installing more solar panels but also on pushing for smart, science-based climate policy. Fred Kruger, president of the nonprofit Environmental Defense Fund, implored CEOs in an open letter last year to “unleash the most powerful tool they have to fight climate change: their political influence.”

Employee activism is critical to driving this shift, Weihl said.

He contrasts it with consumer activism. “If a company has 10 million customers, you have to move a lot of people before the company really notices and cares,” he said. But most companies have far fewer employees than that ― which means smaller numbers of workers speaking up can have a big impact. Throw in the need for companies to recruit and retain employees, and workers’ voices become that much more powerful.

Perhaps no company’s employee activism has been more in the spotlight recently than Amazon’s.

Last September, along with several other corporations, Amazon made its “climate pledge,” committing to net zero carbon by 2040 and 100% renewable energy by 2030, ahead of a massive planned employee walkout. Then in February, the online giant announced a billion fund to fight climate change.

While broadly supportive of CEO Jeff Bezos’ pledge and the climate fund, employees continue to push Amazon to embrace climate action across its entire business, protesting its role in providing oil companies with the technology to find drillable oil faster and in funding climate change denial groups. The relationship between Amazon and its employees remains contentious, as criticism rises over its response to both climate change and working conditions during the pandemic.

In April, the company reportedly fired two employees who had been outspoken about climate change. During a virtual webcast organized by Amazon Employees for Climate Justice on April 16 ― which the company reportedly tried to thwart ― the two urged their former co-workers to stage a virtual walkout to protest their firings and the treatment of warehouse workers amid the COVID-19 crisis.

Some companies have been proactive in accommodating their employees ― such as Patagonia and Ben & Jerry’s, which closed their shops for the Global Climate Strike last September ― but Amazon has done the opposite. It recently introduced a policy barring employees from publicly criticizing the company without prior approval.

When asked about the rise in employee activism and the firing of the two workers, an Amazon spokesperson told HuffPost that “we support every employee’s right to criticize their employer’s working conditions, but that does not come with blanket immunity against any and all internal policies.

“Today the purpose of a company has to align with climate change and employees are calling really strongly for that,” said Farid Baddache, the CEO and co-founder of the sustainability consulting and impact investing firm Ksapa.

Figuring out how to navigate a world in which employees expect businesses to operate with a purpose beyond the bottom line may not be easy for companies, but it is critical because this new wave of activism is connected to the shifting demographics of the workforce.

Millennials now make up over a third of the U.S. workforce, constituting the largest share of any generation. They are more likely than older generations to be employee activists, according to one survey by Weber Shandwick. And according to LinkedIn’s 2018 Workplace Report, 86% of millennials would consider taking a pay cut to work for companies whose values aligned with their own.

For Jake Elliott, 34, who specifically chose to work for Vermont solar power company SunCommon because the firm shared his values, climate change is “the number one most important thing.”

“When you look at global carbon emissions, the majority of carbon emissions are coming from businesses, so it is an obligation and requirement of business to address the climate crisis,” he told HuffPost.

Younger generations “don’t want to commit to work for a company that is contributing to climate change,” said Baddache, “or if they believe that the company is part of the problem rather than the solution.”

Corporate America is increasingly aware of this. “The talent Adobe wishes to recruit and retain expects us to set meaningful climate goals and work to meet them,” Vince Digneo, sustainability strategist at Adobe has said previously. “Our employees want to see us take good action but not just among a flurry of other companies doing the same thing ― it has to have a meaningful impact.”

This sentiment is true not just among current employees but also future ones. A group of law students at Yale and Harvard, for example, are boycotting internships with Paul, Weiss, Rifkind, Wharton & Garrison because it represents Exxon Mobil. They’re accusing the law firm of enabling the destructive impact of the world’s largest oil company in the climate crisis.

“Companies need to hire people and they need to retain people,” Weihl said. This will all become more difficult “if they are on the wrong side of an issue that many of their employees see as an existential threat to their future.”

This story originally appeared in HuffPost and is republished here as part of Covering Climate Now, a global journalism collaboration strengthening coverage of the climate story.