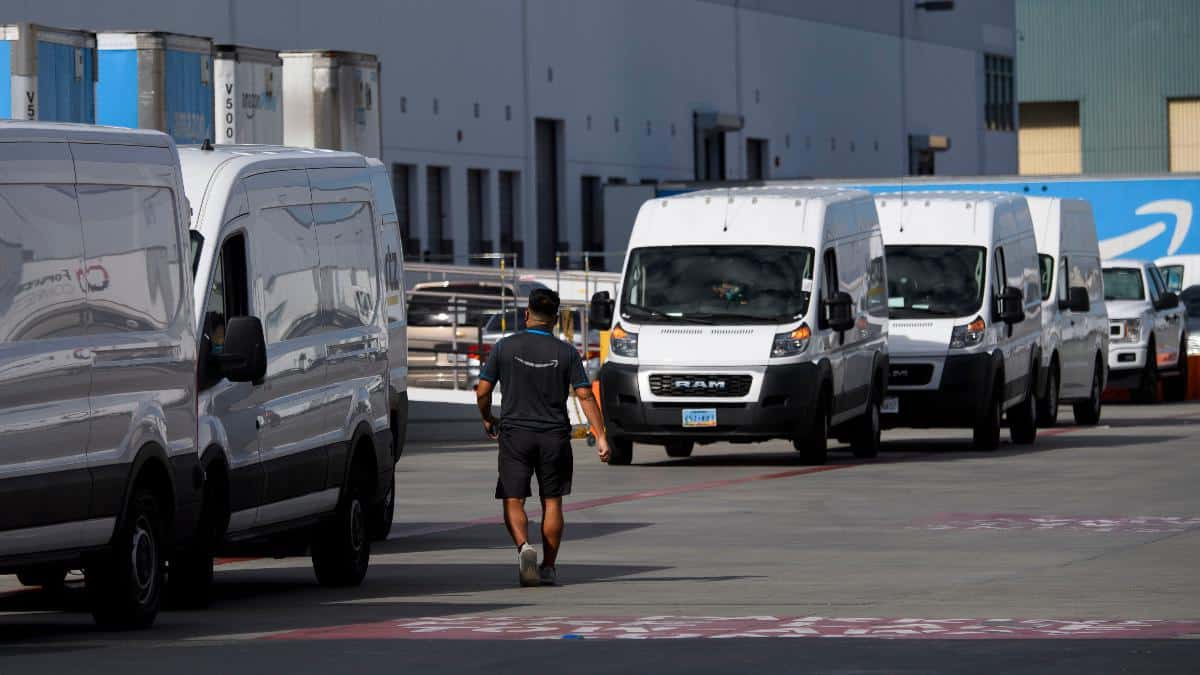 An Amazon.com Inc. worker walks past a row of vans outside a distribution facility on Feb. 2, 2021 in Hawthorne, California. PATRICK T. FALLON / AFP via Getty Images

The report, from the People’s Collective for Environmental Justice (PCEJ) and students from the University of Redlands, shared with The Guardian, is meant to serve as an “advocacy tool to help raise awareness related to the warehouse industry’s impacts on Southern California’s air pollution issues,” Earthjustice noted.

California’s Inland Empire, 60 miles east of Los Angeles, has emerged as one of the largest “warehousing hubs” in the world in just the past few decades, according to Grist. Since establishing its first warehouse in the region in 2012, Amazon has become the largest private employer in the region, where 40,000 people now work in Amazon warehouses, picking, packing, sorting and unloading, as well as driving trucks and operating aircrafts, The New York Times Magazine reported.

In just the last year, Amazon has tripled its delivery hubs in the region due to the demand for online shopping during the COVID-19 crisis. But despite the economic boom, heavy air pollution mainly from trucks going in and out of the warehouses infects nearby communities, the new research showed, according to The Guardian.

The research found, for example, that the populations living within a half-mile of the warehouses are 85 percent people of color, while California’s overall population is 64 percent people of color, The Guardian reported. The research also found that communities with the most Amazon warehouses nearby have the lowest rates of Amazon sales per household.

“Amazon has boomed in 2020 and tripled the amount of money it’s making, and it is happening at a cost to the folks who live in these communities,” Ivette Torres, a PCEJ environmental science researcher and analyst, who helped put the research together, told The Guardian.

The research also demonstrated that the top 10 communities with the most warehouses in the region also experience pollution from other facilities, like gas plants and oil refineries, Earthjustice wrote in a statement.

“The Inland Empire, probably more than any region in the United States, has disproportionately [borne] the brunt of the environmental and economic impact of goods movement, and Amazon is driving that now in the Inland Empire,” Jake Wilson, a California State University, Long Beach, professor of sociology, told Grist.

Last year, the San Bernardino International Airport Authority ratified a decision to allow an air cargo facility development at the airport, allowing Amazon to operate more flights out of the region, Grist reported.

Among the local residents to oppose the decision was Jorge Osvaldo Heredia, a resident of San Bernadino in Southern California since 2005. “This whole region has been taken over by warehouses,” Heredia told Grist, and commented on the “horrible” air quality in the city on most days. “It’s really reaching that apex point where you can’t avoid the warehouses, you can’t avoid the trucks,” he added.

Advocates who published the research are pushing on the South Coast Air Quality Management District, a local air pollution regulatory agency, to move forward with the Warehouse Indirect Source Rule, which would require new and existing warehouses to take action to reduce emissions locally each year, The Guardian reported. Some solutions include moving towards zero-emissions trucks and mitigation fees.

“Last year, we saw some of the worst air quality, with wildfires adding to it, and the trucks were still in and out of our communities. So this is a huge change that we need right now, and that we actually needed yesterday,” Torres concluded, according to The Guardian.