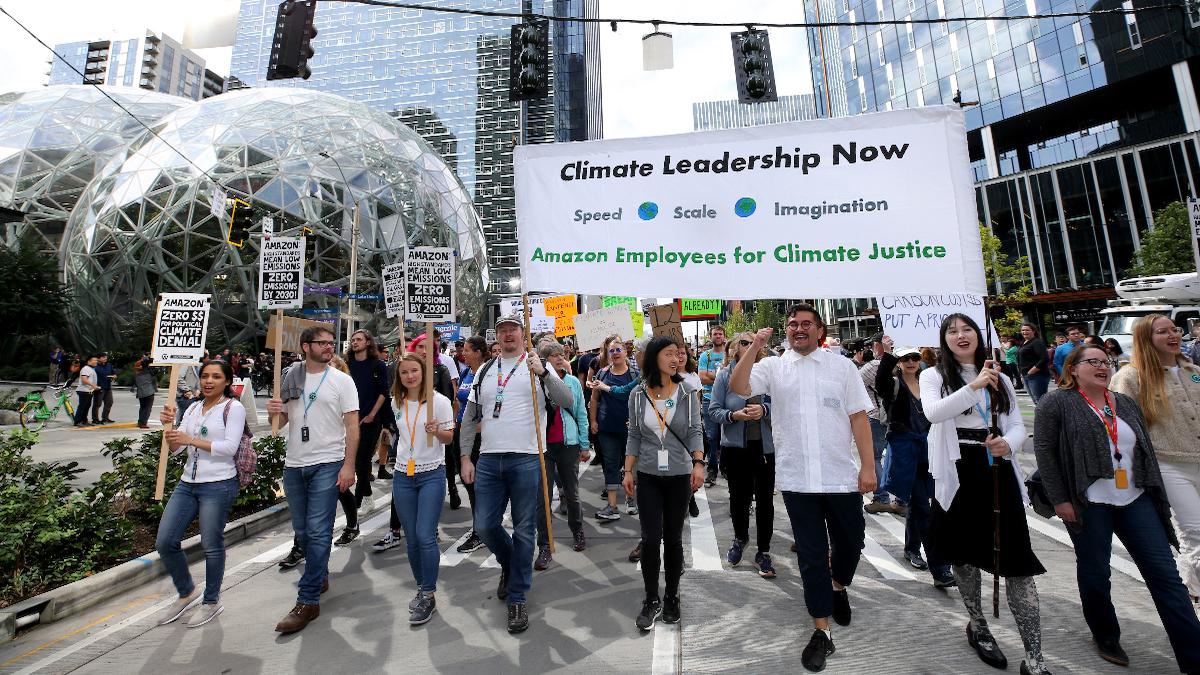 Amazon and other tech employees hold a walkout past the Amazon Spheres during the Global Climate Strike on Sept. 20, 2019 in Seattle, Washington. Karen Ducey / Getty Images

Amazon illegally fired two employees after they publicly criticized the company for its lack of action on climate change and its failure to protect warehouse workers from the novel coronavirus, the National Labor Relations Board determined.

Emily Cunningham and Maren Costa were highly visible members of the small group of Amazon employees who in 2018 called for Amazon to do more to address climate change, and eventually got 8,700 colleagues to sign on to their efforts. They were fired last April, not long after their group of about 400 employees spoke out, in intentional and public violation of Amazon’s tightened down internal policies clamping down on employee criticism.

Cunningham and Costa allege they were fired in retaliation for their activism. If they and Amazon do not settle the case, the NLRB will accuse Amazon of unfair labor practices and the case will go before an administrative law judge. Also this week, the NLRB will be counting votes to see if Amazon’s 6,000 Alabama warehouse employees will unionize, a potentially major change for the company’s notoriously exploitative labor practices.

Cunningham said the ruling proves that they were on the right side of history.

“Amazon tried to silence us,” said Cunningham. “It didn’t work.”

Because of the ruling, Amazon could be forced to offer Cunningham and Costa their jobs back, pay them back pay and reimburse them for expenses related to losing their jobs.

Cunningham and Costa, who were user-experience designers at Amazon, were the two most prominent voices among a group of workers who wanted the company, which has a giant carbon footprint, to take more steps to combat climate change and to stop doing business with oil and gas companies. They held protests and spoke to the media about their concerns.

About a year ago, Cunningham and Costa planned a call between Amazon warehouse and office workers to talk about unsafe conditions in the e-commerce giant’s warehouses. Before it could happen, Amazon fired both women. An Amazon executive quit in protest, saying he couldn’t stand by as whistleblowers were silenced.